Why are all TNR editors asshats? Swirling down the Chait chute.

This week’s entry, by former StarWars extra Jeet Heer (rumored to be playing the young Jabba The Hut in the next release), observes that [mc_name name=’Sen. Rand Paul (R-KY)’ chamber=’senate’ mcid=’P000603′ ] polls better with Republican men than with Republican women, and from that launches into a discussion of how market liberalism is fatally flawed because it isn’t good for or attractive to women.

Jeet makes a basic logical error in the beginning of his piece. He begins with an observation that out of Republican primary voters, Paul does much better with men than with women. He then leaps to his opinions about women in general and how this relates to broad gaseous notions he imbibed in college about political economy and American history.

Someone capable of investigation and analysis would ask how male and female Republican primary voters differ, since those are the relevant populations. Looking inside the GOP, one might find that male GOP voters are more libertarian and female GOP voters more hawkish, socially conservative, or establishment leaning. Or if instead you look at libertarians of all or no parties, perhaps libertarian leaning voters identified in recent polls and discussed at Brookings, Cato, and the Reason Foundation, as often having certain demographic characteristics (secular, younger, more educated) are more likely to register GOP and vote in GOP primaries when male, and more likely to be non-voters, independents, or even Democrats (or Greens or Libertarian Party voters) when female. We will not find out from Jeet. We didn’t get any analysis, in part perhaps because it was difficult enough for a TNR scribbler to admit that female GOP voters exist, let alone survey what they think.  Jeet didn’t even tell us what the other candidate’s gender gaps were, and which, if any, GOP contenders were getting most of the female GOP support. 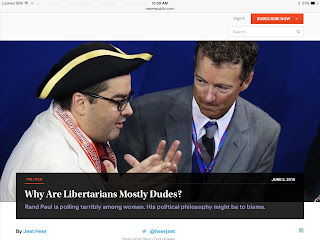 But Jeet’s real purpose is given away by the photo selection.  It’s funny to see how the TNR photo editor searched for a photo of someone s/he thought would be unappealing standing with [mc_name name=’Sen. Rand Paul (R-KY)’ chamber=’senate’ mcid=’P000603′ ].  Outside of the Pauls and academics (some of whom were rather hip and attractive, like Robert Nozick), the best known American men who call themselves libertarians are Himalayan climbing former New Mexico Governor Gary Johnson, comic leading man Vince Vaughn, and movie star Clint Eastwood — who one suspects have more pulchritude – and testosterone – than decades worth of male TNR staffers.

The photo selection certainly allowed for many TNR on-line readers to signal us their superiority, posting about how libertarian men are beta males, socially awkward, unable to find love, etc. etc.  (Projection?) Does this amount to bullying of this poor unknown individual they chose to belittle by reproducing his photo I imagine without his consent? 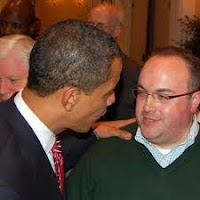 Another surprising aspect of the TNR photo selection (and is it true by the way that former TNRer Stephen Glass is now a photo editor at MSNBC, in charge of cropping African American tea partiers’ hands and faces out of stock footage?) is that the guy they’ve chosen immediately made me think of my old friend and loyal Democrat, Todd Metcalf, who bounced around from being a Gore bundler, to a Clyburn staffer, to a Wyden lawyer. 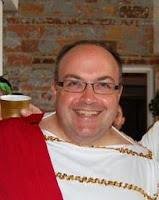 It’s all rather catty from a magazine with a long history of closeted and not closeted gay editors and publishers, possibly rivaling GQ or Details, obsessing about the attractiveness of male politicians or their male supporters rather than their ideas.

How Did This Ever Get Published? NYT Video Takes a Blowtorch to Blue States
Townhall
'Tell us you're a racist elitist without saying you're a racist elitist': Ana Navarro DRAGGED for tweeting racist AF meme on Thanksgiving
Twitchy
Dr. Fauci's Comments on New COVID-19 Variant and the Origins of the Virus Give the Game Away
Redstate
Whose Land Did Native Americans Steal Before Europeans Stole It From Them?
PJ Media