Bruce Jenner’s transition to the personae of Caitlyn Jenner is the occasion for many things I suspect Jenner does not intend.  First, silencing of anyone who wants to discuss the topic, along the lines laid out by Kirsten Powers and Mary Katherine Hamm and Guy Benson in their new books (after all if you say the wrong thing, a transgender kid might commit suicide!).  Second signalling one’s (effortlessly attained) superiority to those who don’t share one’s views about sex and gender (for instance,the reliably kookie and admittedly attention seeking Sally Kohn, who wants her kids to be like Jenner).  Third, as a Washington Post typist claimed today,  the creation of a new wedge issue for flailing Democrats (to distract from a shrinking economy, Clinton graft, and cyberattacks), the alleged war on transgenders. 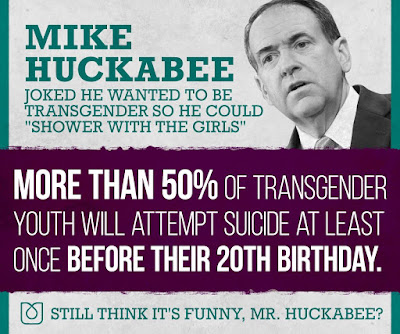 In the way an earlier generation might have adopted all things Madonna to signal one’s affirmation of sexual liberation, one adopts Jenner to signal your enlightened views on gender.   Consider this graphic, where Republican Presidential wannabee Mike Huckabee goes under the knife for alleged hate speech

It’s funny how this meme misrepresents Huckabee. I bet most of the people “liking” it on social media never heard Huckabee’s remarks, but only other people’s commentaries, people who talk mainly to signal their superiority and to feel good about their moral “achievement” and enlightenment. Huckabee clearly was not suggesting that transgender M-to-F people just want to creep on women, since he uses himself, not a transgender person, in his example. He was saying that pervy guys, including many a teen boy, might want to claim transgender status if it means they can visit the girl’s shower room. (This reminds me of people lying about things Palin said to attack her, spiraling down into rape jokes about her kids. They might, with some work, have been able to find legitimate criticisms of these people and not have to misrepresent what they say.)

I’m not sure this meme is explained merely by an intellectually limited “progressive” graphic artist assuming that when one of his Boogeymen, like Huckabee, says something it had to be ignorant, stupid, and racist/sexist/transphobic/heteronormative, without actually attending to what was said.  More likely this is another case when all the “progressive” is doing is a kind of masturbation or self-soothing (which must be psychologically necessary now, with the Obama regime failing at everything but destruction and Hillary Clinton daily exposed more and more as a felon).  The “progressive” is signalling to their support group that they are all in fact superior to all those bad people (despite what reality tells them).  They weren’t wrong!  They aren’t dupes!  Meanwhile “progressives” ignore some of the actual real threats to transgender people just as they have with gays:  just as urban gays have been viciously mugged by criminals of color for decades, poor black transgender women seem anecdotally to often be victims of black teenagers, including teenage girls.   But the “progressive” toolbox has always been short on ways of addressing these real issues.

As libertarian documentary film maker Sean Malone put it:  I have seen about 10 times more posts either praising Jenner, explaining why she is heroic, and ridiculing/dismissing those critical of her than the critical posts.

And I have seen zero actual hateful or particularly offensive posts. Some people expressing dislike or disagreeing with the “hero” label, but no one I seem to know is the kind of awful most of the articles keep posting seem to think are everywhere.

…I am more interested in noting the signalling and the counter-outrage I see. Where are all these horrible bigots? 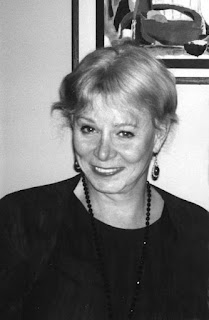 I was wondering if my college microeconomics professor, Dierdre McCkloskey, who was Donald McCloskey when I studied under him, would comment on Bruce Jenner (especially since they are now the two most famous politically non-“liberal” transgender people.  McCloskey penned a book on her transition, Crossing, as well as many brilliant books on the theory and history of the market economy.)  She did, in a piece in this week’s Des Moines Register, where she gave her perhaps expert and learned opinion on how the rest of us should deal with something we don’t personally understand:

My dean at the University of Iowa, Gary Fethke, said at first when I came out, in a little comedy act, “This is great for our affirmative action program: one less man, one more woman!” Gary, like me, is a free-market economist. So his next joke was, “Thank God! I thought you were going to tell me you were converting to socialism!” Then he acted as my friend and advocate….

How to stay calm? Stop thinking of gender change as being about sex, sex, sex. Stop believing the locker-room theory that gender changers are gay, and gays want to be women. Whom you love is not same thing as who you are. You can love your dog without wanting to become a dog. You can want to become an adult, as our kids do, without having much of an idea of what it’s actually like to be an adult.

Stop imagining that all male-to-female gender crossers become prostitutes. Stop imagining that “men” enter the women’s room to spy on born women or commit rape. Stop thinking of gender crossing as an indulgence. Believe me, I would much rather have realized at age 53 that I was gay, or wanted to ride Harleys, than to go through a dozen operations and a lot of funny and terrifying embarrassments.

But I realized in August of 1995, after 30 years of a loving and successful marriage, perfectly normal all around, that I wanted to become an old woman, not an old man. I had wanted it since age 11, but people can adjust, and I did. Captain of my high school football team. Macho economist. Pretty good father, pretty good husband. I can still change a tire — but would rather watch some man do it.

As Malone notes, it doesn’t really matter whether people who want to change genders or feel they were born in the wrong gender are wrong or right: Sidenote: I wouldn’t actually disagree with the idea that transgender people are suffering from a mental “illness”… But unlike agoraphobia, which prevents a person from living any kind of a life at all, we can actually “indulge” a person’s desire to change sexes and if that’s how they want to handle the problem as adults capable of making their own choices, and they don’t coerce anyone into participating…. who am I to care?

In other words we should take a libertarian position and leave these people alone (and treat them as individuals).  And that includes not using them as cannon fodder in the culture war to prove we’re superior to the benighted people who don’t support our party or candidates.