The Conservative Language of 2010 and Beyond 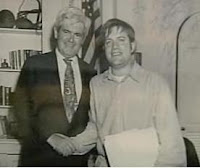 It is my opinion that one of the reasons Barack Obama won last night is that his language was better-tested and better-suited for the United States of 2008. This is not meant as a slight on Senator Obama, but rather a compliment. I believe that there is nothing wrong with couching an argument in your own terms. In this election, Republicans were blindsided by the tsunami of hope and change, and were never able to break through with competing language that made Republican ideas sound good to our increasingly post-modern electorate.

On an intellectual level we saw through the empty hope and change rhetoric and mocked it like the intellectual snobs we so despise on the other side. What we discounted was the emotional reaction to it. Once some people bought in to the emotion, they were convinced that the details and proposals would fit the “hope and change” metanarrative.

What Republicans have to do now is search for a way to present our ideas to this different electorate. This is no longer 1994, and we’re not talking like that anymore anyway.

So here’s my first stab at a Republican metanarrative for 2010: Increasing Individual Freedom.

Here’s why I think it works: As I said earlier, this is an increasingly post-modern country. A growing number of the electorate believe that “what is true for you, may not be true for me.” This is inherently troublesome for a party that has become increasingly aligned with evangelical Christians, who have a reputation of being “dogmatic” and “judgmental” (and who believe that there is only one truth). However, “increasing individual freedom” will sound good to evangelicals, who really just want to be left alone to worship in the way they see fit. It is my experience that most evangelicals are also fans of small government.

That brings me to another point– we have to stop saying we want smaller government and that we want to shrink government. For many, there is a visceral reaction that “smaller” and “shrink” equate with reduced social security benefits and reduced protection.

Here are my recommendations for particular issues that fit the “increased individual freedom” meme:

*To see Luntz in the Frontline episode described, click here and choose chapter 5.