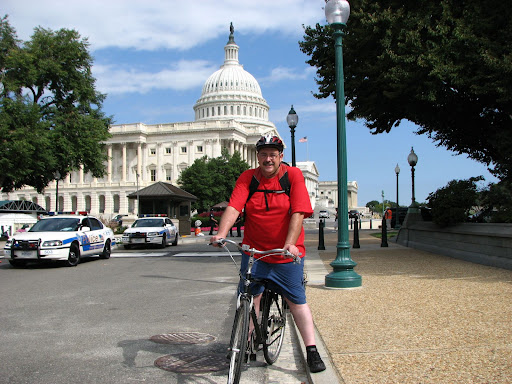 Bill Colley left Bridgeville, Del., on Monday morning and headed West to Washington, D.C. — on his bicycle. Colley, a radio talk-show host for WGMD, had listened to so many callers on his show complaining about the high cost of gasoline that he decided to do something about.

Riding his bike about 114 miles to Washington, D.C., the 46-year-old Colley arrived this morning in time to meet Minority Leader John Boehner on the House floor and deliver 1,700 signatures to the office of Rep. Mike Castle (R-Del.).

I was privileged to speak with Colley after overhearing him share the story with a Castle staffer. When I asked him about the trip, Colley told me he hadn’t been on a bike since 1980 and only began riding again in January. He’d never taken a trip as far as Washington, however. But his outrage about congressional inaction on energy prices put him over the edge.

After collecting about 1,200 signatures at a rally in Delaware, Colley said listeners began mailing him postcards with signatures. Along the way to Washington this week, he collected more, giving him a total of more than 1,700. Although one of the GOP’s more liberal members, Castle welcomed the effort and fully supported Colley’s work.

Over the past three weeks I’ve seen countless people pass through the House floor to observe the historic event taking place. Bill Colley is certainly one of the most unique.