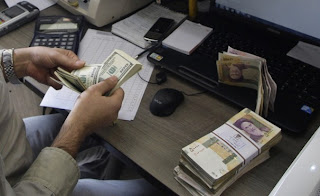 The big news out of Iran today is their worsening sliding currency, which the regime seem to be incapable of handling properly..These imbeciles still don’t understand why this is happening to them. After all, Allah(God) is on their side, so they claim..or is he really on their side?

Whenever a country’s currency starts sliding as much as Iran’s Rial, it suggest the population have lost all confidence in their leader’s ability to handle the economy. From that point on, the only option is to get rid of the nation’s currency by trying to exchange it  for any foreign currencies or solid object, hoping it can hold their holdings’s value.

Publicly, the regime is still refusing to acknowledge the crisis, but privately, it looks like they are clearly concerned and frankly, i doubt they have the brain capacity to comprehend what is going on out there.
Remember, these guys makes decision based on Islamic Sharia-law religious beliefs, and  does not have the doze of pragmatism necessary to run a country’s economy.

While Iran have  pragmatic reasonable people trained in economic in their ranks, the regime prefers to keep them at arm-length because those tend to tell the regime what it doesn’t want to hear… things like, “maybe we should sincerely negotiate with the West and get out of the nuclear situation to save our economy”…Of course the regime don’t want to hear such talk!…”Alluh will protect our economy from the great Satan” they raged while violently pumping their chest.

The Clerics believe Alluh(God) will swat away the effect of Western sanction, so there’s no need to negotiate with the West and give up their Nuclear program…Alluh, according to them, hates the U.S.A

The IRGC generals, on their part, believe a nuclear weapons will bring Military-legitimacy and protect them from regime-change, so they too, don’t want to give ground to any settlement regarding the nuclear program
The IRGC also wants to protect their massive wealth since they actually control 2/3 of Iran’s economy…

So the people of Iran are stuck with ignorant fools who value nuclear weapons more then the economic prosperity of their populace.