So Commies Have Nothing to do with Obama and OneNation... WRONG

In which Bloggo gets serious.

Why was this post on the Communist Party USA (CPUSA) Website directly linked from the Organizing for America page for the OneNation march?

Why we march and vote 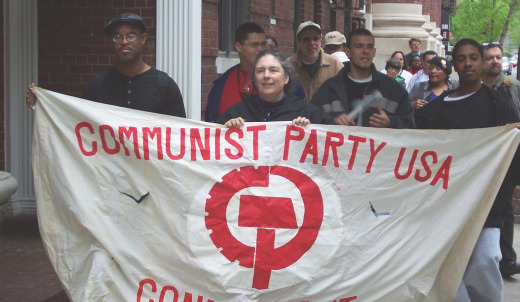 On October 2, tens of thousands of people will stand together in Washington, D.C. demanding that Congress reject the Republican right-wing obstruction and put the creation of jobs and the plight of the jobless on the front burner.

The most crucial midterm elections in our nation’s history are barely a month away. What’s at stake? The future of the changes our country voted for in 2008 with the election of President Obama. The message then was clear: the voters had enough of the right-wing policies attacking working people, enough of endless war, racism, environmental destruction, hate and division.

But the forces of reaction and their supporters on Wall Street, in the right-wing talk shows and networks are regrouping. They are seeking to return to power by taking advantage of the tremendous frustration, fear and desperation of Americans who are suffering in the midst of the economic crisis.

Corporate America is doing everything possible to grow fear, hysteria and hatred. They aim to discredit, divide and derail the thing they fear most – the power of the united movement for change led by President Obama. That movement encompasses the labor, communities of color, women, youth, the LGBT community and their many allies,

They are stirring up confusion and hatred — using as they always have — the twin and vile pollutants of racism and red baiting.

They aim to tear apart the beautiful multi-racial, multi-national fabric that makes up this country, through the despicable use of racism and bias directed at Pres. Obama, African Americans, Latinos, other people of color, immigrants and the LGBT community. They seek to infect disaffected white Americans with racist ideas hoping they will vote against their self interests.

Corporate America is also using anti-communism and red baiting to confuse and divide the people’s movement, charging Obama and the movement that elected him is “socialist.” They seek to revive the “red scare” of the 1950s when McCarthyism disfigured the national discourse, undermined democracy and free speech, effectively divided the labor and people’s movements, and setback progress for a generation.

But this is a different time. People have learned the bitter lessons of history. Millions are coming forward to counter fear and hate with unity and hope, and to protect the democratic majorities in Congress. The Communist Party USA and Young Communist League stand with them.

While thousands are rallying in Washington for jobs, hundreds of thousands of other patriotic Americans who can’t make it will be there in spirit. They will spend their day canvassing door to door, phone banking, registering new voters and talking to their neighbors and co-workers about the issues.

This activism will ensure millions will also march united to the polls on Nov. 2. to guard the change they voted for in 2008.

Those who choose to stand in the way of this expression of the highest ideals of our nation, stand against the interest of the vast majority of the American people.

In this smoking gun of a note, the Communist Party of the USA combines a lot of claims. Let’s list some of them.

Let’s review. Pay attention to the code words from this article.

Most likely, when you visit this post it won’t be the same. That’s because communists always change the historical record if they can. Remember how Joe Stalin would have images of people he had murdered removed from the photos in which they had once appeared? This is typical communist behavior, to change history so they can avoid getting blamed for their actions.

No Truth in Pravda, and No News in Izvestia.
Remember that Pravda meant truth and Izvestia meant news.

If you need to know what to do based on this article, remember these things: