In every Presidential election, it’s my experience that reports of fraud tend to be a bit exaggerated. Yes, there will always be a degree of problems – but most of those are of the human error variety, not purposeful lawbreaking. With so many millions voting, and so many election officials who are really just volunteer librarians, mistakes are bound to happen. The Electoral system helps guard against these things mattering, and I am fairly confident that outside some isolated incidents in big cities, voter fraud won’t change who wins the Presidency tomorrow. Corrupt as they are, I doubt very much that ACORN will provide the margin of victory.

Now, when it comes to local elections, I think the story is the reverse. Voter fraud can have a huge impact on a local level, and yet it’s almost always underreported. ACORN can’t make a difference in the presidential stakes, but they can make a difference in who becomes the next mayor, commissioner, or Congressman. And it’s surprisingly easy for that to happen in an environment where election laws and regulations are shockingly lax.

Consider where I live – Loudoun County, Virginia, arguably the swing county in a swing state, and one Obama is absolutely certain to win if you’re keeping score. Here in Virginia, you can go in and vote absentee early – a slightly different arrangement than other states, but quite straightforward in practice. An enormous number of people, more than 450,000, have taken advantage of this so far. All you have to do is go to your local office, stand in line for about 30-45 minutes, fill out a form, and vote.

At the Loudoun location on Saturday, they weren’t requiring picture ID – not even a Federal one, just any ID. Turns out you don’t need one. How convenient.

But if, in theory, Virginia decided to require that you present an ID as opposed to just sign a piece of paper (which will only matter if there’s a lawsuit, of course, which costs money and time and is politically dangerous), it’s awfully easy to get ahold of a Virginia voter card with someone else’s name on it (perhaps one of these fun creations). Especially if you rent rather than own.

You see, in a state with more than 400,000 newly registered voters since the last election, polling places have changed a lot. The Volunteer Firehouse location where I’ve voted all but once in the past 8 years can’t contain the polling place this year, so it’s moved. So have the polling places for much of Loudoun. The local Election Board was kind enough to send out a mass mailing informing every voter effected by this change a few months back.

And they were also kind enough to include a new voter card, with your name, address, and local polling place printed on it.

Personally, I received five voter cards in the mail. One was mine – four others were for people who have not lived in the house I rent for more than three years. Five different names. Same address. They sure do make it easy. 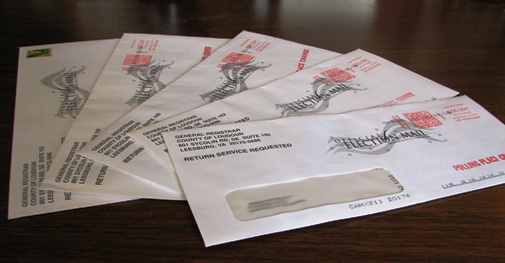 Useful, that. If you were interested in helping your guy, whoever it is, win.

It’s really quite easy to do a bit of DIY Election Fraud in an age where they send the Voter Card, info and all, direct to you. But hell, you won’t even need it in the Old Dominion – there’s no ID required. Just sign the paper promising you’re cool, and your vote matters just as much as everyone’s.

It’s like leaving the front door wide open for days, and being surprised that the TV is gone when you come back.

A Group Of Parents Sent Their Kids' Face Masks to A Lab for Analysis. Here's What They Found
Townhall
Patriarchal, sexist Victoria's Secret replacing the Angels with soccer star Megan Rapinoe and the rest of the 'VS Collective'
Twitchy
Joe Manchin Phone Call Leaks and It Has Massive Implications
Redstate
LOSING IT: Read Lori Lightfoot’s DERANGED Emails to Staff
PJ Media