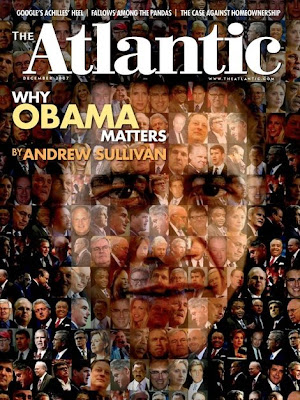 Yesterday Moe and I with his colleagues in respected corners of the news media who had disparaged Sarah Palin, relying on the rantings from the foulest corners of the blogosphere as the basis for their articles. Douthat’s disappointment – along with that of his colleagues McArdle and Goldberg – turned slowly into outrage over the course of the day, as it became clear that much of his frustration was directed at the worst offender of them all: Andrew Sullivan.

Sullivan is on the extreme edge of the assault on Palin – even as Campbell Brown and others have drastically scaled back their attacks on Palin as they realized their allegations were either unfounded, irrelevant, or significant stretches of fact, Sullivan continues to beat the drum. He repeats rumor and innuendo as established truth, but even worse, insists that every tabloidesque rumor be met with immediacy by Palin herself. It’s more than a little pathetic: Andrew Sullivan, once one of the most brilliant wits of the neocon blogosphere, now occupies that darkened zone of the tabloid preacher – the streetcorner pamphleteer who cries to all who will hear, “The Government will not respond to my writings the existence of extraterrestrials among us, and THIS LACK OF DENIAL PROVES DEFINITIVELY THAT THEY ARE HERE!”

As Jonathan Last blogs at the fantastic Galley Slaves: Sullivan demanded that he be able to inspect Palin’s amniotic fluid or Trig Palin’s placenta in order to determine the “hidden truth” about Palin’s pregnancy. Sullivan posted repeatedly, writing over and over again – with no basis other than his own expertise in photo analysis and the rantings of bloggers and commenters with no reputation for accuracy – that Palin’s pregnancy was a suspect issue that demanded clarification. Was the baby hers? Who was the father? Was it a faked pregnancy? All were questions that Sullivan insisted needed answering.

In the wake of revelations about Bristol Palin, rendering much of what he argued moot, Sullivan now insists that his continued writings and tabloidesque musings about Trig Palin’s conception and birth aren’t out of bounds at all, merely because the baby exists.

Presumably, they should put it wherever people put babies to keep them out of the public eye.

Sullivan’s public descent into rampaging dementia is frightening, and one wonders what it could possibly signify about his relationship with The Atlantic. I have been public for years in my belief that The Atlantic is the best magazine in America, and it has, as others have noted, a brand built on a century of brilliant writers and the best minds of the literati. Today, Sullivan represents a complete downfall of that brand name – embracing fully the worst kind of speculatory writing, based on nothing more than what he sees on television and receives from adoring fans in his inbox.

Sullivan has had a bizarre series of public loop-de-loops in recent months, primarily motivated by his devout affection for Barack Obama. His insistence on ignoring his own past political views led to a strong back and forth earlier this year, when Pete Wehner – who I know to be a former fan of Sullivan’s writings before the man went nuts – showed how Sullivan’s current claims completely conflicted with everything he’d once written about the war on terror. To which Sullivan, after much ridiculousness in response, could only respond: “I was deceived and feel terrible responsibility for my naivete.”

Perhaps someday Andrew Sullivan will say he feels deceived by the Andrew Sullivan he is today, and feel terrible responsibility for believing the rantings of the nuttiest members of the online left. But until that day, if it ever comes, he will keep up his courageous quest, insisting that he is just “posing questions,” that he has no bias on this point but a search for hidden, dirty, scandalous truth. He will ask the tough questions, the hard questions, the questions he can ask about medical practice and birth because of his long history as an OB-GYN, an educated nurse, and the handsomest midwife in the tristate area.

The Atlantic sure is getting what it’s paying for.