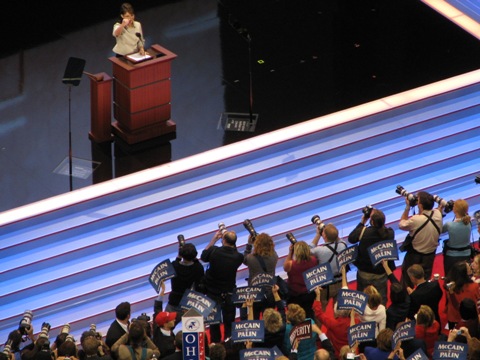 “My understanding is that Gov. Palin’s town, Wassilla, has I think 50 employees. We’ve got 2500 in this campaign. I think their budget is maybe 12 million dollars a year – [my campaign has] a budget of about three times that just for the month.”

“This is a man who can give an entire speech about the wars America is fighting, and never use the word “victory” except when he’s talking about his own campaign. But when the cloud of rhetoric has passed … when the roar of the crowd fades away … when the stadium lights go out, and those Styrofoam Greek columns are hauled back to some studio lot – what exactly is our opponent’s plan? What does he actually seek to accomplish, after he’s done turning back the waters and healing the planet? The answer is to make government bigger … take more of your money … give you more orders from Washington … and to reduce the strength of America in a dangerous world. America needs more energy … our opponent is against producing it.”

A week ago, from far and wide, the followers came to the mountaintop to glimpse Barack Obama in his moment of glory. And the New Adonis did not disappoint.

The event was an act of soaring political grandeur, inspiring the devoted flock to call out in hallelujahs. Yet in the speech itself, try and find it you may, but there was no phrase particularly memorable, no quotable line.

Do not hold that against his speech. It is not what Obama said that mattered.

The lasting image of Obama’s speech will be the spectacle itself: a Super Bowl halftime show without a game score to go with it (unless it is New Democrats 0, Neo-Old Democrats 1). No one is prompted to such an equivalent force of emotion, the tears of joy, at the idea of President McCain. At least, no sane person. But sanity itself is an act of rebellion in a civic universe where the political pageantry surrounding a man who has accomplished such meager political crumbs and done so little in life is enough – more than enough – to carry a candidacy based on the unassailable purity and goodness and untapped power of that one man all the way to 1600 Pennsylvania.

What Sarah Palin came the Twin Cities to say tonight mattered. It mattered because it proved she was not merely chosen for her gender, for her looks, for her style, or for the historic mark she represents for the Republican Party. She was chosen because of her beliefs – because she’s taken on the hordes of corrupt bureaucrats and pork swilling politicians, even those in her own party, to achieve what she believes is right. It’s because on the most crucial test for any politician – will you stand up, despite all the forces arrayed against you, for what you believe to be right? – Sarah Palin passed, and Barack Obama has that nagging Incomplete. 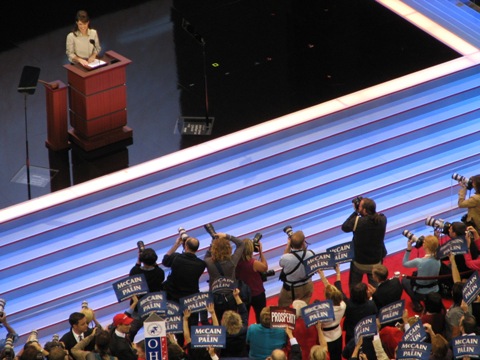 When has Barack Obama taken an arrow from his own party for anything he believed in? When has he decided that he would act, with bravery and courage, staking out a tough decision that he believed to be right, against the wishes of the old political masters of his party? When has he broken with the leftist base, who today screams with all their might that this woman is not fit to lead even as she governs a state budget and an employee base that dwarfs anything Obama has run, that her family is fair game because she is vile, that her place is the home and not the campaign trail, and cannot possibly be a mother and a political leader?

Obama has no lack of a certain kind of courage – give him that. It takes bravado of a sort to declare that you deserve the credit for so many things in the state senate, in a biopic video so short that it cannot find space to mention Columbia or Harvard Law, where you had no hand in the legislation, and most often voted “present.” It is courage of a sort to take a file photo of yourself standing alongside Dick Lugar as an indication that you, through sheer force of will and over the objections of the warmongering right, ended the expansion of nuclear weapons. It is a form of boldness, yes, to declare in one instant that John McCain is a man to be respected and honored, and in the next contend that this man – who defended the Democratic nominee in 2004 against all attacks, even accurate ones – has committed a grave insult against all in the arena by declaring, old war hero that he is, that he will put his country first.

That man in the arena presented himself the kind of savior America needs, after all of his promises, declaring his ascendant “humility.” He read the word off the teleprompter carefully, as if using his mouth in a way it was not used to. Humility. Yes, the humility that promises on the one hand to create massive corporate loopholes to encourage artificially-created jobs, then on the other to pay for them by closing massive corporate loopholes. The humility that swears in the one instant to lessen costs, and in the next to require vast sums of money from corporations to a degree that would drive any sane organization from our shores. The humility that promises to cut taxes, even for people who do not pay taxes, and pay for them by going line by line through the federal budget and cutting out the treasured programs managed and cared for by Democrats in the bureaucracy since the days of Franklin Delano Roosevelt, and defended by their allies in the Congress, with but the stroke of a pen.

One wonders which reporter will be brave enough to ask which major program he will cut first. He had, before people started paying attention to his campaign, mentioned NASA as a possible plum target – creating a sucking sound of irony, considering the prominent placement of the returning astronauts in his campaign video…but such needling questions are for after an election, not before.

Barack Obama came to Denver to give a Democrat speech. It may eventually be remembered as the apotheosis of a conventional Democrat speech: the images taken from places he did not live, jobs he did not work, wars he did not fight in, to connect with the broadest possible audience of people. It could have been given, nearly all of it, by John Edwards, man of the milltown – before he ceased to exist – or by Hillary Clinton, the original blue collar warrior from Chicago. It was a speech for Democrats, and delivered to Democrats – and hence the lack of the true outline that makes for powerful remarks. Like the State of the Union speeches given by the eloquent yet fickle President Clinton, it is assumed that this laundry list, a litany of campaign promises that merge together into a mushy feeling of warmth and contentment, would be met with glorious clamor, as if proceeding from the mouth of a god. And they were.

Sarah Palin did not come to speak as a god. Her words proceed not from the bowels of Olympus, but the heart of the enduring American spirit – the driving force that calls out from the rough frontier for young men and women to go West, and ever West. It asserts the worth of the seekers, the pioneers, and all those who are ever unsatisfied with the limits of the status quo – that things are as they ever will be, and you should accept it, and move on. She speaks to those who heed the call to carve out a spot of land and make it your own, to build a good home, to raise a good family, and to be ready, should they ever call for you, to defend the freedoms that made all this possible – to defend them with your all. This is an ordinary action – but in the course of doing it, it can become extraordinary.

What Sarah Palin said tonight matters. She asks you not to vote for her because of what she claims to be, but because of what she is – because of the principles that undergird her, that motivate her, that made her challenge the old guard in her own party and the bureaucrats in others – and now, to take on the self-proclaimed Arbiter of Change. What she said tonight shows that underneath her pleasant exterior and her mother’s smile is a sharp, talented executive – one who knows how to throw a punch, and how to make change a reality, not a promise. She is tough – she is a fighter – and she is not about to blink.

It was not what Obama said that mattered. Those were words – just words. He shined in his moment of beauty, his message delivered with the Chestertonian clarity of the absurd.

And so, as the man has declared it, he is.