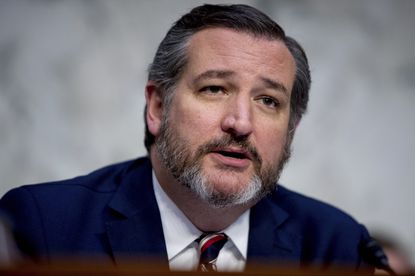 Texas Senator Ted Cruz has been at the forefront of fighting the Iranian regime for years. He has a long record of unapologetically speaking against the regime’s malign activities in the Middle East, its nuclear and ballistic missile programs, and human rights violations. Cruz believes negotiating with the regime poses a national security risk. He was a prominent voice opposing Obama’s nuclear deal before and after it was signed. Two years before the Trump Administration designated the Islamic Revolutionary Arms Corps (IRGC) a terrorist organization, Cruz introduced to the Senate the IRGC Terrorist Designation Act. He has also met with prominent Iranian opposition leader, Crown Prince Reza Pahlavi, to discuss human rights violations in Iran.

Teaming up with Senators Marco Rubio (R-FL) and Tom Cotton (R-AR), Mr. Cruz has been lately focusing on the critical issue of Iranian regime lobby and propaganda in the US. On January 13, 2020, the three congressmen, along with Senator Mike Braun (R-IN), wrote an official letter to Attorney General Bill Barr asking him to investigate the National Iranian American Council (NIAC), a Washington-based organization highly suspected to lobby for the Iranian regime. The letter stated, “NIAC’s innocuous public branding masks troubling behavior.” The four senators also raised concern “that certain organizations that purport to represent the interests of [the Iranian-American] community, specifically NIAC, may be conducting lobbying and public relations activities in coordination with or on behalf of the government of the Islamic Republic of Iran.” Cruz and colleagues asserted that given the nature of NIAC’s activities, the organization may be in violation of the Foreign Agents Registration Act, which requires individuals conducting political or advocacy work on behalf of foreign entities in the US to register with the Department of Justice.

On February 6, 2020, Cruz teamed up again with Senators Rubio and Cotton, in addition to Senator Marsha Blackburn (R-TN), to send a letter to Twitter CEO Jack Dorsey asking the platform to suspend the accounts of the Iranian regime’s Supreme Leader Ali Khamenei and Foreign Minister Javad Zarif to comply with US sanction law. In 2019, the Department of the Treasury’s Office of Foreign Assets Control designated both of these individuals. The senators contended, “While the First Amendment protects the free speech rights of Americans — and Twitter should not be censoring the political speech of Americans — the Ayatollah enjoys zero protection from the United States Bill of Rights.”  They added, “as the leader of the world’s leading state sponsor of terrorism — directly responsible for the murder of hundreds of US citizens — the Ayatollah and any American companies providing him assistance are entirely subject to US sanctions laws.” In a tweet, Cruz urged Twitter to stop allowing members of the Iranian regime to propagandize on the social media platform.

Iranian regime propaganda has become a major conundrum not only for the national security of the US, but also for the Iranian-American community. The regime’s propaganda on social media and the pro-regime postures of organizations like NIAC sow division among members of the Iranian-American community who have diverse political persuasions. Hackers and fraudulent news sites commissioned by the mullah regime undermine the democracy in the US by targeting vulnerable segments of the American society, including the youth and ethnoreligious minorities. Additionally, this stream of toxic propaganda could – and is perhaps meant to – interfere with the 2020 US presidential elections.

As an Iranian-American resident of Texas, I commend Senator Cruz for taking the initiative to address and highlight this long-neglected issue threatening the security of our nation and that of the Iranian-American community. Hopefully, other congresspersons –including those on the Democratic side – will join Senator Cruz and his colleagues in their determination and efforts safeguarding this great nation and its democracy.