The Road to Cleveland

The “Road to the Final Four” starts today. You win and you advance towards the Final Four in the NCAA Basketball Championship. You lose and you go home.

After Tuesday, Donald Trump’s ride got a lot smoother. He now has more than one-half of the delegates he needs for the nomination. If he can win just over 50% of the remaining delegates at stake he will lock up the nomination on the first ballot.

He is driving towards Cleveland on I-80 on a clear path with little traffic in his way.

Ted Cruz’s ride got a lot rougher. There is no interstate for him. His route to Cleveland involves a tough drive with three vehicles fighting for space on a two-lane road that also has plenty of twists and turns along the way. 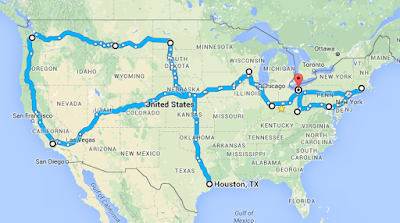 John Kasich, despite winning Ohio, has no route to Cleveland as I have written previously. Kasich now has 143 delegates of the 1,237 required. He needs an additional 1,094. There are now only 1,061 left to be allocated. If he wins them all he is still 33 delegates short.

I had to laugh Tuesday night when John Kasich’s campaign tweeted this out.

A whole new ballgame? Do they think this ball game has 109 innings? The game is over for Kasich and has been for a long time.

At this point, Kasich is nothing more than a skunk at a garden party. All he can do is disrupt the process.

Can Donald Trump be stopped now?

It appears unlikely this deep into the primary process.

Trump could be stopped short of 1,237 but he will still undoubtedly have the most delegates leading into the convention which will make it difficult to deny him the nomination even if it becomes contested.

I only see one way that Trump  could be denied the nomination with any legitimacy and that is if from here on out in the race he is still not able to see his popular vote totals rise above the 50% level.

There would then be an argument that although he has the most delegates in hand he has not been able to attain a majority of Republican voter support.

To date, there has not been one state that Trump has received more than 50% of the total voter support.

As an example, look at last night’s percentage totals for Trump.

In a one-on-one race with Ted Cruz, if Donald Trump were to lose upcoming races in Arizona, Utah, North Dakota and Wisconsin, this race would look completely different and a whole new narrative would unfold in the media. Everyone would start questioning whether Donald Trump is as strong at the ballot box as he appears.

The all-important momentum in the race would also change leading into big delegate states such as New York (95), Pennsylvania (71)  and California (172).

However, with John Kasich in the race we will not get the needed clarity that is needed to see that picture. A 3-way race muddles the potential momentum Cruz could gather.

Consider the difference in optics between Cruz defeating Trump 55%-45% compared to Trump polling 40% to Cruz at 35% and Kasich at 25% in a 3-way race.

To put that in context, a 55%-45% win would be a bigger defeat than Barack Obama put on either John McCain or Mitt Romney. That was considered by the media to be an overwhelming victory.

On the other hand, Trump polling at 45% (and winning) feels completely different. As Donald says, it is all about winning.

You might think that it is unrealistic for Cruz to be able to defeat Trump 55%-45% in a two-way race.

However, consider this data from last night’s exit polls.

44% of the Republicans who voted for someone other than Trump yesterday stated they would not support him in November. These are not Democrats or Independents. These are Republican voters!

Or how about this on how many Republican voters would consider a 3rd party candidate if the choice in November is between Hillary and Donald. 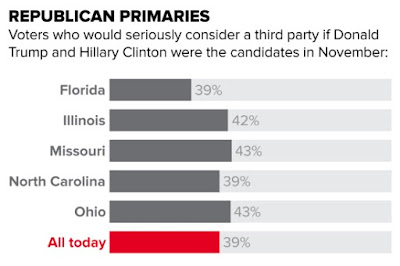 Yikes! And this is who looks to be the Republican on the freeway headed to Cleveland?

The fact is that I think this race has now congealed to the point that it is really only a simple choice for most voters.

Are you voting for Trump or are you voting against Trump? That is what is really in the minds of most voters when they cast their ballot now.

I think one of the ironies of yesterday’s vote was that John Kasich believes he beat Donald Trump in Ohio due to the job he has done as Ohio’s governor. I don’t believe it for a second. I think he won because he was not Donald Trump yesterday.

If Kasich had not been in the race and it had been Marco Rubio or Ted Cruz one-on-one with Trump, I think they would have also beaten Trump yesterday in Ohio. Look no further than the numbers of those exit polls above.

It is possible that Trump cannot be beaten in a one-on-one race. If he cannot, he deserves the nomination. However, Republican voters also deserve the straightforward choice of Trump, and the one other candidate who still can gain the nomination on his own merits at the ballot box, Ted Cruz.

This is where the Republican Party is headed right now and John Kasich is not helping in any way.