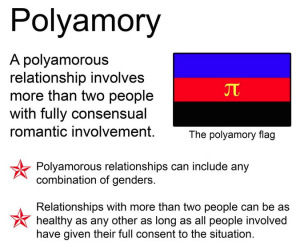 There is a disturbing trend pushing polyamory as “normal” and “socially acceptable” by the media, Hollywood, “science,” public schools, federal and local government officials, and the “medical community.”

Promoting polyamorous relationships, transgender, subjugating minors to sex-reassignment surgery and pubescent blocking drugs, and teaching children gender neutral terms within the context of “sexual fluidity” only harms children and promotes mental disorders as normal rather than insisting that the mentally ill receive the psychological and medical help necessary to help them.

The majority of Americans oppose this advocacy and do not practice such depravity, nor do they want their children exposed to it.

The 3 percent’s agenda extends beyond achieving “marriage equality” and normalizing transgender, polymorous grouple & throuple relationships– to demanding that anyone who disagrees with them be punished.
​ ​
The question is what’s next? Legalizing sex and marriage with animals and children? Making legal prostitution, polygamy, pornographic video and photos of human beings having sex with non human animals? Who decides how many sex partners ​one can legally ​have and for how​ long? Listen to learn more.
Share
Tweet
SHOW COMMENTS
TRENDING