Penn State, Joe Paterno, and the morals of a civil society

I must say however that it saddens me, and even sickens me that thousands of students would riot in “support” of a football coach who allegedly had some (small) role in continuing this madness beyond when it should have stopped.

Now I won’t make the mistake of laying this whole episode at the feet of Joe Paterno. That would be ridiculous. Even if the allegations in the leaked stories are true, the unspeakable acts done to young boys are truly the responsibility of one person, and that is not a Paterno. Moreover, Paterno and others within the program allegedly did follow through with the “legal minimum” in reporting the incidents, and thus he and they are not criminally implicated in these allegations.

I can appreciate that Joe Paterno is not just your average football coach. His presence is truly legendary not just at Penn State, but in the sport of college football. The Paterno family’s legacy is interspersed throughout the University, not just within its football program. Many hundreds of young men owe thanks and gratitude for the positive impact that Joe Paterno has had in their lives.

What saddens me, however are the (possibly) dozens of young men whose lives are irreparably harmed because men who should know better, possibly including Joe Paterno did not forcefully speak out when given that chance.

What appears clear is that several men had the opportunity to end this horrific tale many years ago. For reasons only they can understand, they did not. These men who act as pillars of society could not find the courage, given the chance, to “do the right thing” and forcefully stop a colleague from unspeakably hurting young boys.

For needed perspective I’ll quote Carey Casey, director at the National Center for Fathering, who asked this question:

“Would their response have been different if the 10-year-old victim had been their son or grandson?”

As I watched thousands of young people wailing and gnashing their teeth (and flipping a media van) about the fate of an 84-year-old man who should have known better, I wondered what they would have thought if it was their brother who allegedly could thank Joe Paterno (among others) for not speaking out to protect these young boys?

As I watched Joe Paterno’s son speak a quick line to a camera after the football game on Saturday, seeming quite sad about his father’s fate, I could only hope to wonder who was all the more sad for all the children who had been needlessly hurt because Joe Paterno allegedly couldn’t bring himself to vigorously bring needed shame to a friend? Just what were authorities at Penn State supposed to do once the facts were known? Later, Jay Paterno rightly pointed the focus of his concern on the real victims of this evil – the boys.

Again, I don’t lay all the responsibility, or even the majority for these unspeakable things at the feet of Joe Paterno, or anyone else save the person who actually committed the crimes. Allegedly, Joe Paterno and others at least did the legal minimum to report the crimes. But if all these allegations are true, it appears if Joe Paterno and others within the PSU Athletic Department had vigorously “done the right thing” rather than effectively protect a colleague, the network of damaged people I mentioned above would be smaller. For people in their positions of authority, is the “legal minimum” really good enough?

I refer you once more to the quote I cite from Carey Casey above. I am not interested in people trusted with authority carrying out legal minimums for reporting crimes against children. Instead I choose to discern just what level of advocacy we expect from adults in our community. Children cannot advocate for themselves. Instead adults must do that for them as we are all entrusted with their care. I am not an “it takes a village” advocate; however when it comes to the care of children we must all seek a standard that treats the value and protection of children from evil with the highest standards of judgment.

So as I watched the spectacle of outcries for Joe Paterno’s fate this week, I want to instead focus my own sliver of energy upon speaking for the actual victims in this fiasco – all of them not men, but boys.

I am thankful that the Board of Trustees at Penn State University finally “did the right thing” themselves and gave no quarter to men in authority and representation of their University. The Trustees sought the highest standard for authorities, and that is to be commended. These are all men who should have known better, and in my view only have themselves to thank for their dismissal from employment at Penn State University. While many of these people may have done the “legal minimum” in their individual cases, their zeal for seeking justice for the real victims was allegedly lacking…although hindsight is always 20/15. 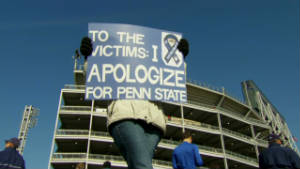 The actions of Penn State’s Board of Trustees allowed interim president Rodney Erickson to definitively state, “Never again should anyone at Penn State — regardless of their position — feel scared to do the right thing.”

I do pray that Joe Paterno and his family can find true peace and forgiveness. I hope that the rumors and leaked details in this case are not true, for their sake and for the sake of untold boys harmed by their colleague after they knew there was likely a serious problem.

More appropriately, I pray that the boys (many of them now men) and their families find healing and the peace that passes all human understanding. I save my sorrow and grief solely for them.

As adults, we have the most solemn responsibility to raise and protect the future generations. Let’s pause to remember that serious responsibility. These responsibilities and virtues will always transcend the temporary values we place upon constructs of the world.

Did You Catch What Biden Said About Our 'New Normal'?
Townhall
'Honey, do you even HISTORY?' Joy Reid SCHOOLED for pushing revisionist history claiming the parties MAGICALLY switched places
Twitchy
Biden's Slip of the Tongue About Kamala Harris at Bill Signing
Redstate
The Democrats' 'Joosie Smoolyay' Problem
PJ Media