That great friend of the conservative movement Jonathan Martin at the fair and balanced (especially when Palin is involved) site Politico has an article up which  has this weeks media swoon presidential candidate Haley Barbour in focus.


It has a “my people want to speak to your people” slant advising that representatives of Barbour are seeking out representatives of Mike Huckabee to see if they can get Huckabee,should he not run to endorse Barbour. This has been picked up by Hot Air who do their analysis of  it might play out  in the primary elections in South Carolina and Iowa.


Fair enough, the scenario’s are possible should this come to pass-even though it appears Huckabee’s people have denied there is dialogue, But for arguments sake, and of course anything can happen, what might a possible electoral college map look like about midnight on election night? Before examining that it might be useful to consider the comments,which are of course partisan, at Hot Air which they preface with this comment “Haley Barbour figures out way to alienate entire conservative blogosphere.”


There follows comments about staying at home, how all Barbour  needs is a white suit and a cigar and Boss Hog would be running, DOA  and, well you can read them for yourself. I can’t imagine what the left Blogosphere would make of a Barbour candidacy, much less the late night comedians, but if he is the GOP’s choice so be it.


I think the map below is a fair representation of what I believe might be the maximum result, given normal circumstances, for Barbour. He wins the entire south including the vital states of North Carolina, Florida and Virginia. If any of those were lost then Republicans might as well turn off their television around 8 p.m. or so. After that the absolute key to the election, as it was for John Kerry, is Ohio.


If Ohio is lost the election is lost. To me Barbour would be one of the least likely of the GOP candidates with a realistic chance of ,getting the nomination, who could appeal to the blue collar northern working class in Ohio, especially any Blacks, who might have been otherwise  persuaded to vote Republican. This, even with a Northerner as his VP-Pawlenty for example.


Even in the best case scenario I can find, if Colorado is added to a Barbour score, along with Iowa, he still wouldn’t win. Stretching matters to their ultimate, if he won Iowa, Colorado and Nevada it would result in a tie in the electoral college.


To me a Palin candidacy would have the best chance of taking Ohio (she would not even need Colorado) and with a VP from Florida-West or Rubio (who would shore up her South-West Hispanic vote as well) she would have a good chance of taking the three key states of Florida/North Carolina/Virginia.


Any dreams of Wisconsin/Michigan/Minnesota going to the GOP may have been dealt an irreversible blow by the industrial unrest in the area, whereas it has been lower key in Ohio. This might affect consideration of Pawlenty’s chances too. 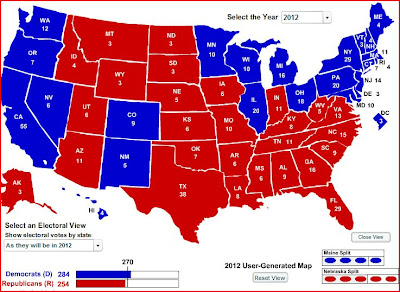 Linked to Hot Air
Original Post At: M.Joseph Sheppard’s “A Point Of View”