For all the garbage thrown at Palin by the Dem’s and their enablers in the media, for all the snotty upturned noses by the conservative “elite” at the mere thought of a Palin ascendancy, the Democratic Party aligned, radical leftist Daily Kos official pollster PPP (D) Polling shows an inexorable rise by Palin.

This is of course totally uncommented on by the leftist media as it doesn’t fit their agenda but the facts don’t lie and here they are: 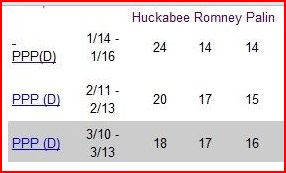 January to March was the worst period for Palin-media attack wise, when she was being blamed for the Gifford’s tragedy and for, well for being alive, meteor showers, the dog biting your postman, and anything the left could dream or dredge or invent up.

But, through this period, an unimpeachable source, a Dem pollster, has shown her steadily increasing her support amongst the GOP. Of course, at this point it is only the GOP voters who count as it is they who will determine the nominee-not the Dem’s or the liberal media or the snotty GOP elite.

What the grass roots are saying, and poll after poll has confirmed exactly what they are saying, is that they want a genuine, evangelical, conservative candidate. The Huckabee/Palin support levels have been consistently running between 34% to 38% for months-more than double that of Romney. What has changed in this scenario now is the steady increase in the Palin level of support, and the steady decrease in the Huckabee level of support. His falling 6 points in the three most recent polls, which again, contradicts the current meme.

As for President Obama, after the media beat up for his mourner-in-chief speech in Arizona, and his “victory” in giving in to keeping the Bush tax cuts, his poll numbers, as measured by Gallup/Rasmussen, are steadily sinking. His vacillation over the Middle East, his golfing whilst the world burns, and general lack of inspirational leadership is showing the empty suit syndrome is alive and well.

After hitting a post Arizona trauma high of 51% the combined Gallup percentages for Obama are:

Which facts are, again, not commented on by the liberal media as it doesn’t fit their wishes. But the facts are the facts, and as Palin ascends Obama other descends, much to the dismay of the left.

Original Post At: M. Joseph Sheppard’s “A Point Of View”

The Responses To This Slate Writer's Call To End Outdoor Masking Tell You All You Need To Know About The Left
Townhall
Sen. Kyrsten Sinema has a not-so-subtle four-letter message in her latest Instagram post (Check out her ring!)
Twitchy
Joe Biden Takes Inane Mask Hysteria to Another Level
Redstate
BREAKING: Three Dead in Austin 'Active Shooter' Incident
PJ Media