There has been discussion recently that since the media has decided President Obama is unbeatable in 2012 then the GOP might as well go down fighting with a candidate who stands for the basic principles of the party i.e. Sarah Palin.


Whilst the defeatist attitude is abhorrent the premise that a candidate who best represents the base would be doing proper justice to the loyalists and would attract the voting support of the Tea party activists who might otherwise sit out the 2012 election.


It is of course by no means a given that President Obama will cruise to re-election. In January 1980 President Carter had a 34 point poll lead over Ronald Reagan and that did not turn out to well for the Democrats in November-so anything is possible.


However, for the sake of an argument lets suppose that Obama is impregnable and will cruise to victory.What the is the point of putting up a centrist candidate e.g. a Romney or a Daniels “who will appeal to Independents” if the ticket will lose anyway?


It might be said that having a ‘safe pair of hands” would ensure that the down ticket losses might be minimized, or Democrats gains negated, but that is by no means the case.There are many instances where a sitting president far outran his ticket and in fact lost ground in Congress whilst cruising to an easy re-election.


The voters know how to differentiate between the presidential and congressional candidates. For example, President Nixon’s overwhelming victory in 1972 was not accompanied by any significant increase in Republican strength in Congress. In point of fact the majority Democrats increased their Senate holding by two seats.


It would, from this current vantage point, seem very unlikely that the GOP would lose the House so soon after its smashing victory in 2010 no matter what sort of candidate they ran with for President. Further, with so many Democrats retiring and if the economy is still in bad shape there looks every chance that the Republicans could pick up the Senate in 2012 thus, if Obama is re-elected, basically making him a lame duck from day one of his second term.


With a truly conservative candidate such as Palin, there appears a core base of Electoral College support, which the Goldwater election of 1964 represents (Map 1). If the hopeless year for the GOP of 1996 (Map2) is examined, that base is bigger still, and it has strengthened even further if (Map 3) the 2008 election is examined. Surely there could have been no worse time for a GOP candidate to run since Landon in 1932 given the negativity towards the Bush years, the economic crisis, and the two unpopular wars, yet the base has tripled in size since 1964 and the McCain/Palin ticket performed remarkably well given these deleterious factors.


2012 will see all those factors reversed should the current economic, military and political situation continue as it is now. president Obama, as did President Carter, will own the prevailing climate in November 2012 and the Republican base will be determined to vote in strength, whilst all those areas of support Obama put together in 2008 with such enthusiasm-youth, anti-war proponents, Blacks, may not be so enthused next time.


Thus, as map 4 shows, if the states which have traditionally been Republican are added to the 2008 base then Palin has every chance to win. The GOP establishment has no credible argument for a middle of the road candidate as there are clear indications that the base would sit on their hands come November 2012, and in that case there is a very strong possibility of significant down ticket losses.


In a worst case scenario the GOP runs a true conservative and loses badly-although they were going to lose no matter who they ran. But even still, history shows the party could actually gain congressional seats even with that outcome, and the base would still bring a more credible showing than the Democrats results with Carter/McGovern and Mondale, whose states they won combined across three elections was only one more than Goldwater’s effort.


History shows that even with a massive loss that is no bar to winning the presidency four years later as Nixon proved in 1968, Carter in 1976, Roosevelt in 1932, and Kennedy in 1960. Thus the GOP has everything to gain with a Palin candidacy, especially with a Republican congress, as she would ensure that genuine conservative policies would be implemented and the country would be back on its traditional center-right path. Anything else is defeatism and surrender to the Beltway establishment.
MAP 1. GOLDWATER 1964 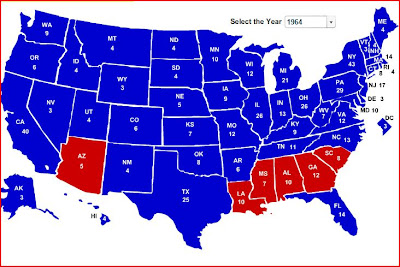 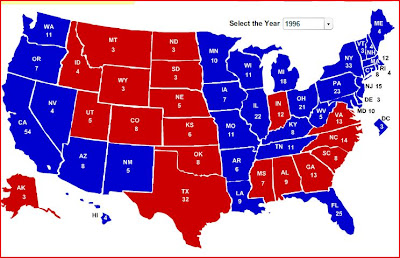 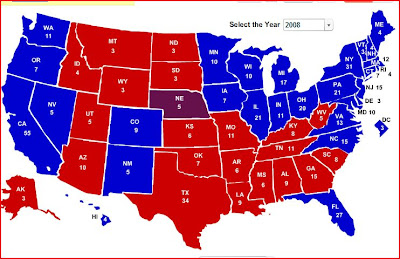 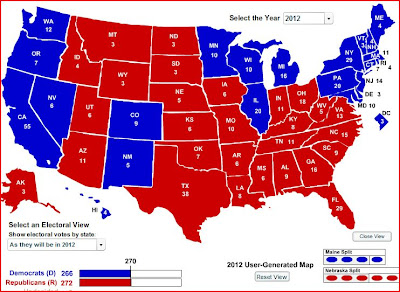 Original Post at : M. Joseph Sheppard’s “A Point of View’

FL Sheriff Has Some Advice for the 'Millions' of People Moving to the State on How to Vote
Townhall
Norfolk Police Department fires officer who was outed for donating $25 to defense fund for Kyle Rittenhouse
Twitchy
BREAKING: Police Shoot and Kill Teenage Girl in Ohio, Angry Crowds Already Gathering
Redstate
New Dispatch From The Brady White Files: Why Risk Your Life if You're A Cop?
PJ Media