Recipe for an Election Day Coup? 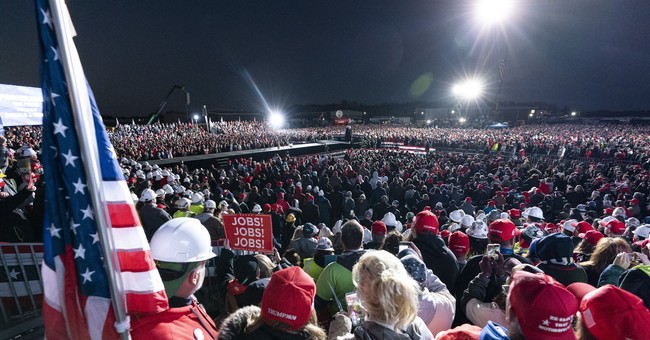 The president’s son, Donald J. Trump, Jr. today outlined a scary scenario which the Democrats and media might try to pull off to incite riots and terrorism, and delegitimize a victory by President Trump.

Speaking on the Rush Limbaugh Show, Don, Jr. warned that one or more networks may deliberately and falsely call the race for Joe Biden long before sufficient votes are in, perhaps based on biased exit polling.

With that declaration, Biden would give his acceptance speech, and demand that President Trump concede. The networks would then amplify that demand, and ‘experts’ would declare the military may have to be used to oust him. Headlines would blare, “Trump stealing election.” Democrat anger would rise to record levels even as a Trump victory may be solidifying.

Thus incited, the rioters already taking the streets around the country and well-provisioned with weapons, food, bail money, and trained in terrorist tactics, would then go full terrorist because “Trump stole the election.”

Essentially, this could be stage one of a true 3rd-world-style coup, designed to deny the president a clear victory no matter if he wins every state.

As if to confirm this scenario, former President Obama said that Trump “might declare victory before all the votes are counted tomorrow... that’s something a two-bit dictator does.” Jen O’Malley Dillon, Joe Biden’s Campaign manager “Just because Donald Trump says something on election night or suggests he might be winning, that is not going to be based in fact,” and “under no scenario will Donald Trump be declared the victor on election night.” Biden reportedly has no plans to concede tonight, and Hillary told Biden in August that he “should not concede under any circumstances, because I think this is going to drag out, and eventually I do believe he will win if we don’t give an inch, and if we are as focused and relentless as the other side is.”

A very strong win by Trump can make these ‘coup’ plans useless. That’s what we should all hope and pray for.