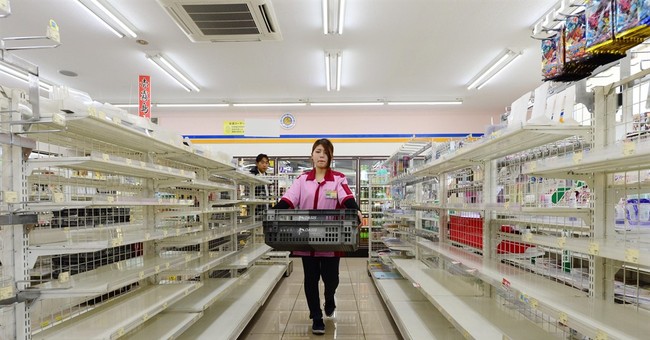 “Look, I won! I got everything I ever wanted, well, maybe not everything, but I got people lining up for food now. And toilet paper. You know what I did today? I stood in a line, that’s what.

“I went to a grocery store to see these lines, and I cried tears of joy. My driver let me out and I just stood with a hundred people lining up. I don’t know what they wanted, my staff keeps my estates well supplied, but might have been toilet paper or bread, might’ve been.

“You know how much toilet paper we waste? You should be ashamed. When I honeymooned in Moscow to see the glories of Communism, I waited in line for half a day with my Soviet minders and cried because it was so touching. They needed toilet paper, but theirs was strong enough to reuse it, and that’s what we need.

“Part of my Green-red deal is reusable toilet paper for all Americans as a fundamental right. Not 43 varieties and colors but just one gender-neutral, recycled reusable type so everyone can have some–just wash it in the sink every day.

“I want to thank all my loyal fellow travelers and useful idiots for all your money and hard work. We won, we got breadlines and empty shelves just like the Soviet Union! Thank you. I gotta fly my private jet back to my lake house now because my chef made a wonderful treat for dinner.”

The Establishment Is Running Out of Cannon Fodder for Its Woke Military
Townhall
'The difference matters': Reporter notes that the 'shot at' narrative is nuanced and suspect might not have taken aim
Twitchy
Bette Midler Uses July 4th to Declare Independence From Wokeness, Stuns Everyone in the Process
Redstate
BLOODBATH: Six Dead, Two Dozen Wounded at Suburban Chicago 4th of July Parade [UPDATED]
PJ Media