If George F. Will writes another column it will mean the end of conservatism 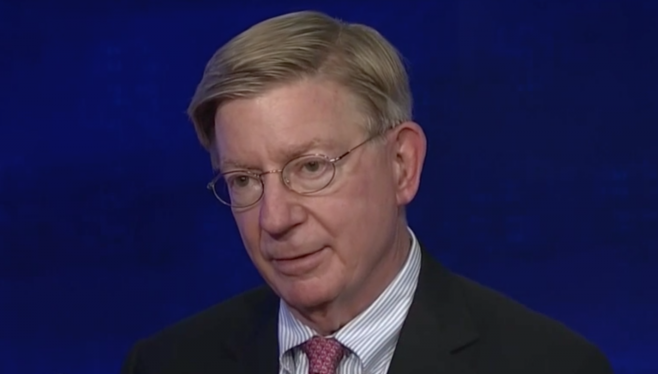 The following diary is a structural rip off of this George F. Will column and his vehement attack on Trump. I’ve taken massive liberties with his work to point out the style of his writing easy to imitate and actually kind of fun. Maybe this is my calling in life, rewriting and reediting George Will. If that is the case it draws into question my modified conclusion, but I can tackle that later. I don’t think that Mr. Will takes advice from Redstate or little ole’ me so I’ll be in good shape.

If you look at George Will’s comprehensive bloviating and practical incompetence — is there a spineless pseudo-intellectual opinion he does not espouse? — you might see this: He is a fundamentally weak figure. His compulsive pontificating is evidence of overconfidence. His unassuageable blandness suggests over-arching and wasted approval that inflate his self-concept. His incessant displays of his overt and misplaced self-efficacy indicate that he is self-persuaded of his inherent greatness. Now, wincing from the discipline applied to a young golden retriever, Will has gone off of the deep end, flailing into obscurity and irrelevance.

Will vamps like a child prodigy, who never really graduated college. His parents must have stroked his pride at every turn. I can hear the conversation circulating in the Will household circa 1960, “Great job Georgey. Oh, that is so profound. You are a brilliant and creative one, aren’t you?” And “eat your salad Georgey, it’s brain food.”

From the American Spectator:

Santa was not very kind to George Will this Christmas. After months of Will’s calling Donald Trump a “vulgarian” and his supporters “invertebrates,” Trump is doing better than ever at the polls. The latest RCP national rolling average has Trump at 36.5 and Cruz, his nearest rival, at 17.8. Cruz narrowly leads Trump in Iowa (+2.8), but Trump is way ahead in New Hampshire (+13.7) and South Carolina (+14.4). So Santa’s message to Will is: You no longer have a following, dear boy.

The Will column mashup continues…

But by his incessant attacks on Trump, and by postulating a ridiculous equivalence and slippery slope — Trump says crazy things, Obama destroys nations, so Trump will destroy the Republicans, what’s the big deal, or the difference? — Will has forced conservatives to recognize their immediate priority.

Certainly conservatives consider it crucial to defeat liberalism at every turn. The assumption that electoral politics has the normal ebb and flow where the Democratic Party rents the White House for an 8-year lease and then the Republicans get their keys to the castle is arcane. Will’s fear that we may not prevent Democrats from taking over our government and running roughshod over Congress and the Supreme Court demonstrates in vivid detail his total lack of vision and real understanding. This is exactly what has already happened. Maintaining the status quo by electing establishment Republicans will not fix it. But first things first. Conservatives’ highest priority now must be to prevent Will from writing another column in the GOP’s most epochal intra-party struggle since its founding in 1854…

Caught Red-Handed: NBC News Busted for Editing Out a Crucial Detail in the 911 Call of the Ohio Shooting
Townhall
'Who made this?': Now it's LeBron James getting the Gif treatment and it's 'brutal'
Twitchy
NY Post Reporter Masterfully Turns 'Systemic Racism' Tables on Jen Psaki During Press Briefing
Redstate
The Morning Briefing: Trump's Biggest Failure Was in Not Gutting the FBI
PJ Media