Dear Delegates: "Please - Save Your Party from Itself!!!"

[Update – looks like Perry and Abbott are probably off the list due to their semi-endorsements of Trump today. Their pictures now reflect their new status.]

Tonight, I have very bad news for you.

The voters have sent you a big, hot, steaming pile of compost, and now you’ve been given the task to spin it into gold thread. It’s an impossible job, and I feel for you.

So here’s a message from someone who is hearing from lots of conservatives tonight, delegates: do what your conscience dictates. Trump is a certain loser in any general election matchup, and could possibly lose in such dramatic fashion that it would change the face of Congress. So do what’s in your heart. You have it in your powers to change all the convention rules, to refuse to cast your first ballot votes, to refuse to even show up for first ballot voting.

You have it in your power to throw this to any number of people who could and would defeat Hillary in November – Scott Walker comes to mind. Rubio and Cruz are still on speed dial. In fact, you could pick nearly any candidate outside of Carson and Christie and Gilmore, and probably do better than Trump will.

I can almost certainly guarantee you, if you delegates hijack the convention and install your own candidate, there will be no uprising from the Constitutional Conservatives. I can’t think of a soul on the right that would pick up a pitchfork or a torch and try to drag you out of Cleveland on a rope. There would be no tar-and-feather from this political corner. In fact, your choice could quite likely win the whole enchilada, and make you all into heroes.

So please, please do us a favor and do what the voters wouldn’t – find us a sane candidate. Reject the clown!

Give us a candidate. Not a clown-show with a blonde wig and painted face.

A Texan, a Cheesehead, a Hoosier, a Californian. Heck, we’ll even take a Canadian!!! A Governor, a Senator, a former CEO of an actual, real company. A prosecutor in a wheelchair, a University President. An ADULT!! Please!!!

[Update] After seeing his CNN interview today, I’ve decided there’s at least one more excellent choice for the delegates – someone we could all get behind – Leon Wolf, RedState’s managing editor. 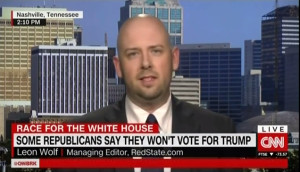