The Washington Examiner has an article out with interviews with highly placed New Jersey GOP operatives, claiming that Chris Christie is stacking the NJ delegate field with people loyal to him. These insiders say he’s likely to play “party boss” and use them as a 51-delegate bloc at the convention in order to negotiate something valuable for himself. He will tell them to vote for Trump, unless he finds a better deal from someone else.

If Trump doesn’t reach the 1,237-delegate threshold that would give him an outright majority and secure the nomination on the first ballot, he can count on the Jersey boys to stick with him, even after they’re no longer forced to under the rules. Unless, of course, Christie decides to switch allegiance.The governor enjoys an unusual command over a delegation that isn’t necessarily as pro-Trump as might be assumed from the billionaire’s dominance of the slate. If Christie makes a move, he could cash in his delegates’ IOUs and lead them into a rival camp.

In a deadlocked convention, Christie could dangle his 51 delegates in front of another candidate scrambling to reach 1,237. Political power has become diffuse, but the governor is a throwback to an era of the party strongman, affording him the ability to cut a deal without asking for permission.

NJ GOP insiders are saying that due to Christie’s tactics, Trump is guaranteed a win at the upcoming primary:

“This is all over but the shouting,” said Bill Palatucci, a member of Christie’s inner circle and a convention delegate by virtue of his position as New Jersey’s Republican National Committeeman. “Those 51 delegates are virtually guaranteed to Donald Trump.”

Christie is using his party boss powers to ensure that Trump delegates receive the “County Line” on most local ballots – meaning that their names will be listed as the “official County Republican slate”, and will be nearly ensured of victory in the primary voting:

At Christie’s direction and as carried out by the county GOP chairmen, Trump delegate candidates are expected to receive the “county line” on the ballot in most counties. Union County was an exception. There, Ohio Gov. John Kasich won the county line. Union was the home base of the late Rep. Bob Franks, Kasich’s longtime personal friend and close confidant. Kasich also is expected to do well in Monmouth County. Cruz has been shut out so far.

A few days ago, I wrote about a report that Chris Christie demanded Trump be promoted above other candidates on the Camden County, NJ ballot or there would be “political consequences”. Camden County GOP Municipal Chair Tom Crone spoke with me about the allegation, stating that his GOP County chair stated that Trump and Trump delegates would be given the most preferable position on the ballot as the candidate endorsed by the county. This was done without a vote or any convention or consideration as had been done in other NJ counties after Christie spoke ominously about “jobs and appointments” being at risk.

Two days ago, Mr. Crone was interviewed about the RedState article on CBS radio in Philadelphia to elaborate on his concerns. Crone made several important points:

Here is a partial transcript of the interview:

Tom Crone: I’ve got to be honest with you. There was an article in the Washington Examiner [linked here] end of last week that spoke about this exact thing. And there’s so much talk about what happened in Colorado and Missouri and other places like that. That’s the system. And everybody seems to forget that political parties pick political candidates. You vote for a representative, it’s how the Republic works. You vote for a representative, and they go and represent you. What I had, I almost like to refer to it as the Jerry McGuire moment that I had no regret. When it comes to New Jersey – New Jersey is a little bit different – they have what they call the “County Line”. Individual County chairmen can award the County Line – or the best possible place to be elected. And when you are in the County Line, everybody just sees you as part of the regular Republican Party [on the ballot], and they just go straight down Republican. And they’ll push other people out on the ballot further along, in other columns. But what happened here – In other counties they held conventions, they had conversations, there were people brought to bear, and if they had an issue, they spoke with representatives from each individual Presidential candidate. In Camden County where I’m from, there was no conversation. It was a unilateral decision made by our county chairman. And, while that is something that he has the power to do in our bylaws, I think it should have been put to a vote, or a discussion, or even a convention of sorts. This is very important – getting the County Line basically is ensuring that Mr. Trump will now be picking up delegates in New Jersey. And with the Governor having so much sway that he does – and that’s not my opinion. I mean, his own party bosses have that same opinion. I was just echoing what they said, but not in a positive way.

Giordano: Well, what’s wrong with this then Tom – is this just hardball politics then – your guy over in South Jersey then gets the demand from Christie and threats of repercussions. He says “Hey, we’re doing this and I’m not talking to you, I can do it, that’s it.”

Crone: Well of course, that is the system, and that’s the New Jersey way as people understand. But when Ted Cruz talks about the Washington cartel, and how he needs to break the way the system is done and why the system is broken – this is the New Jersey cartel. This is not just Republicans, it’s Democrats as well. You ever wonder why New Jersey has the highest taxes in the nation – it’s because of the party boss system. Everybody has a job, everybody has this, you can threaten their families, you can threaten them to vote the way they tell you. And the regular citizen suffers. And I’m part of that system, and I have to be honest with you, I’m not happy with it. It doesn’t matter whether I’m a Cruz supporter, a Trump supporter, or a Kasich supporter – everybody should be upset about it…

Giordano: Well Tom now, RedState says this sounds like it could be a potential election violation. Could it be?

Crone: I’m not an attorney, and RedState wrote that. I never said that, and that’s someone’s interpretation. [Note: it’s not a potential violation for a NJ County GOP Chairman to make an endorsement. But if the governor threatened “political consequences” and threatened harm to “jobs and appointments”, it could be a different story].

Giordano: But the broader point is this. Cruz is going to Colorado, Wyoming, Missouri this morning, these other places within the rules, and he’s pushing it to get the delegates, at least on the second ballot if there is one. Here in Jersey, it’s the old fashion way. Christie, as some would say, has been emasculated as the Trump guy. But he still has the juice here to tell people where this will be on the ballot.

Crone: And that’s very true. My point, and I guess it was later in the evening I was kind of annoyed. And I put something out there on social media – and I have no regret. I’m not one of these people and I’m gonna backpedal. I said it, and I put my name on it. I have no problem with that. But when people like Bill Palatucci, who is our national committeeman from New Jersey – he’s quoted in last week’s article in the Washington Examiner – “it’s all over but the shouting”. Really? So I’m gonna shout. So this is my time to shout.

Giordano: All over but the shouting in Jersey you mean…

Giordano: I’m very glad that you put this out there, and we saw it Tom. And again, I think Jersey’s in play big-time in a lot of ways. The Cruz campaign is not sending Heidi Cruz into South Jersey and Wayne, New Jersey tomorrow, wasting time, with so many states, unless they think there are delegates here they can win.

Crone: No, it’s important, you have to remember, all of New Jersey is a Winner Take All – you still have to be elected as a delegate from your Congressional District. So there is still a ground game at play. And, you’re absolutely right. The Cruz campaign is sending his number one surrogate – his wife – to South Jersey. And that’s very important. He is not taking for granted one single vote. We’ve seen how polls can be absolutely ludicrous.

Getting in an F-35 flight simulator in Utah, and gunning down enemy jets at a range of 71 miles.

Salt Lake Tribune reporter and F-35 follower Nate Carlisle had a chance recently to sit in an F-35 simulator, and shared his experiences. From locking in missiles on enemy jet targets 71 miles away before they could visually detect him, to being detected by radar once his missiles had deployed, to dropping a bomb on the Utah countryside and coming in for a rough landing, Carlisle’s journey in our most advanced military fighter makes for an interesting read.

Oh, and Carlisle rolled his F-35 by accident. The solution? Take your hands off the stick:

“The aircraft is designed to be really easy to fly,” [instructor and former F-16 pilot Eric Best] said, “because the pilot needs to focus on the displays.”

The article includes a nifty little slide show as well:

Meet your bartender of the future – Reuters Photo Slideshow

Meet “Carl” – your bartender today at the Robots Bar and Lounge in the eastern German town of Ilmenau. Carl and friends are learning to mix your drinks, cook your soup, wash your dishes, and a thousand other mundane tasks: 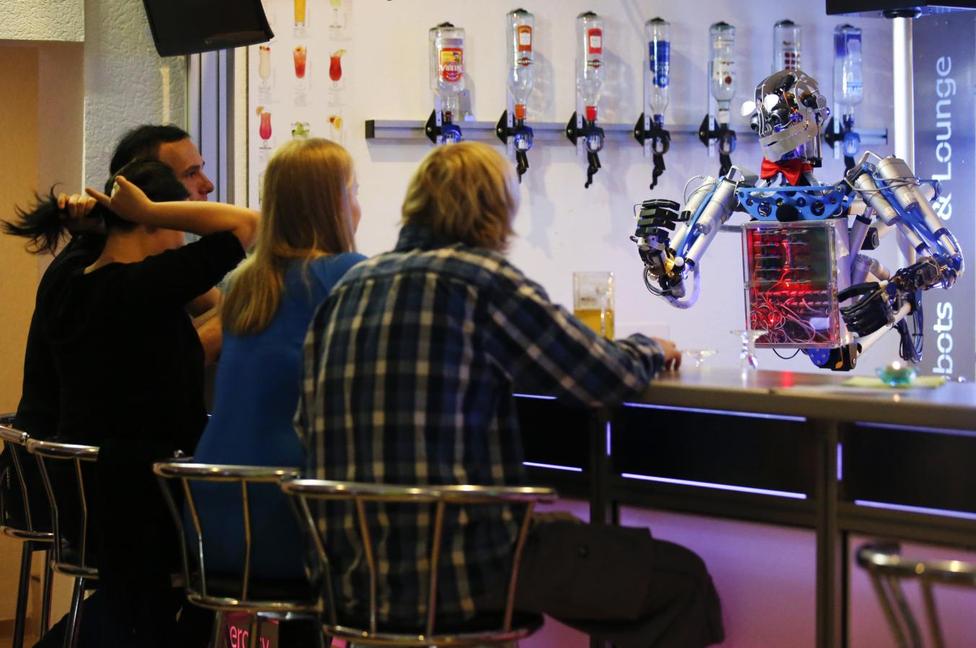