Cruz finished off a sweep of the state. The best the Trump organization could manage was a few alternate delegates, and Kasich was never in the hunt at all. 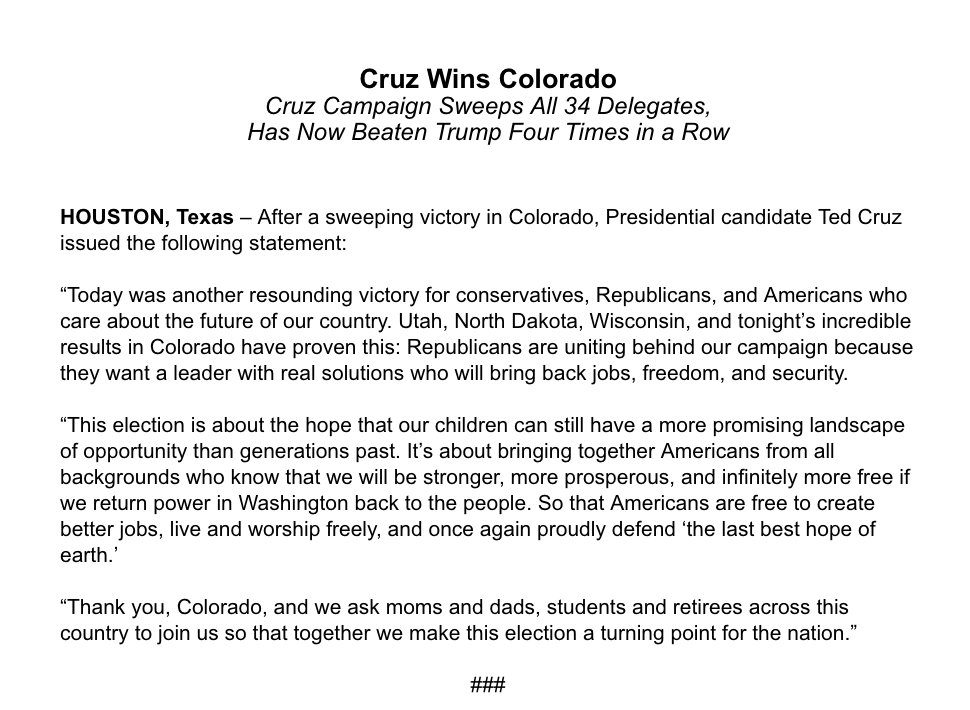 Colorado went from unbound to WINNER TAKE ALL for @tedcruz. Crazy! #copolitics #cogop2016

Trump scores 6 alternates in CO, but is shut out of delegates. 30 of the 34 are pledged to Cruz, remaining 4 on his slate + will vote 4 him.

Colorado Republicans are cheering anti-Trump today and carrying around Cruz-brooms in anticipation of a 13-delegate sweep today after grabbing the first 21 delegates the last couple of days. The likelihood of Cruz completing the sweep is increasing, as Trump’s people are screwing up their delegate fliers which tell their people how to vote.

Trump’s folks are passing out fliers with a Cruz delegate on them:

Uh oh. Delegate #289, who is on Trump list of preferred CO delegates, is actually Ervin Krause — and bound to CRUZ. pic.twitter.com/ZnWpLPSUc6

And Trump’s fliers have the wrong delegate numbers for the names on their list, which will make it very difficult to vote, since the actual ballots will only have numbers, not names:

Lots of problems for the Trump Keystone Cops crew:

Whoops…major errors on Trump slate. 5 delegate #’s are wrong & of those 5, 1 pledged to Cruz and 2 unpledged. pic.twitter.com/Ayr1sO6VeT

COLORADO SPRINGS — Hello from the @ColoGOP convention where @tedcruz supporters expect a *sweep* of 37 delegates. pic.twitter.com/TR7pA3jvBW

Fortunately for Trump, his folks have already given up before the voting even starts:

Spoke w/Trump CO super volunteer Becky Mizel. Said slate was her idea but “we know we’re not going to take anything out of” it.

Trump might as well give up – when the crowd cheers #NeverTrump, you know it’s not going to be a good day:

Cheers from Colorado delegates when speaker says: “America deserves a heck of a lot better than Hillary Clinton or Donald Trump.”

What 6,000 Colorado Republicans look like from the sky. #DelegateHunter pic.twitter.com/7eGahRWWck

[Update] By noon, Trump’s people had fixed their sample ballots. Well, kind of fixed them:

So, only 3 names & numbers of delegates wrong. Not quite so bad. Errrr…. make that 4:

[Update 2] Cruz finished speaking a short time ago, a normal stump speech with a lot of praise for Colorado Congressional Districts voting for his delegate slates. Reporters on-site say that the place looks like one big Cruz rally:

It’s not easy being a Trump supporter in Colorado. Why they’re feeling “demoralized”: https://t.co/YT53gQavhu #copolitics

MSNBC chats with a Cruz delegate at the convention today:

Cruz just wrapped at CO’s GOP convention. This woman on was on stage w him & has his endorsement for RNC delegate. https://t.co/9cTeDYlwy6