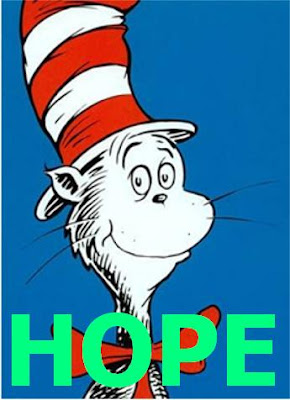 In celebration of the National Association of Education’s yearly “Read Across America” project, which started Tuesday, March 2, First Lady Michelle Obama appeared at the Library of Congress and read to a select group of youngsters Dr. Seuss’ classic children’s story, The Cat In the Hat. Her choice was appropriate enough considering that Tuesday also marked the good doctor’s birthday, who would have been 106 if still alive.

The Cat In the Hat was written by Dr. Seuss, a.k.a. Theodor Seuss Geisel, in 1957 as a response to a challenge by the Life magazine writer, John Hershey, who specifically mentioned Geisel as an ideal illustrator for modern children’s books in a May 25, 1954 article titled “Why Do Students Bog Down on First R? A Local Committee Sheds Light on a National Problem: Reading”. Geisel’s publisher, Random House, asked him to write a new style of engaging children’s literature using a limited vocabulary of only 400 words, which the publisher’s estimated school children were learning at the time. Geisel cut the suggested list down to 223 and added 16 of his own.

Using the pseudonym of “Dr. Seuss”, Geisel’s The Cat In the Hat proved an instant hit and the story of the two rainy day bored young children first enjoying then panicking over the crazy, chaotic antics of a floppy red-and-white stripped hat wearing tuxedo Cat accompanied by his eagerly undisciplined partners-in-crime, Thing One and Thing Two still resonates with young readers 53 years later.

In fact, The Cat in the Hat is such a fondly remembered piece of American literature that it was recently quoted in the US Senate when, in 2008, Senate Majority Leader, Harry Reid, in complaining of a stalled immigration reform bill likened the problems on the Senate floor with the chaos caused by the Cat and read out from the book into the Senate record, “‘That is good,’ said the fish.’He’s gone away, yes. But your mother will come. She will find this big mess.'”

Reid went on to explain, “If you go back and read Dr. Seuss, the cat manages to clean up the mess.” A tip o’ the Cat’s hat to whichever analyst so succinctly commented about Reid’s failure to get the bill passed by saying “the Cat in the Hat did not have to contend with cloture.”

Now, considering that if Dr. Seuss was alive today as a cantankerous 106 year old watching the purposeful destruction of America through the Cloward-Priven strategy and Saul Alinsky formulated chaos, he’d want to revisit his The Cat In the Hat characters using the cadence of his Green Eggs and Ham with President Obama as the hammy Cat, Speaker of the House Nancy Pelosi as Thing One yegg and Harry Reid as Thing Two yegg:

I do not love the Rule of Law.
I do not claim citizenry from Paw.
I do not follow Constitutional rules.
I do not care if I hurt Democratic mules.

I party every Wednesday without fail.
I drink like a fish and dine on quail.
Everything revolves around me, me, me.
I won! I won! So let me be!

I’m off to golf instead of work.
I snub the Brits and Gordon Brown’s a jerk.
I grovel in front of every despot I can.
America needs to learn that I’m the Man!

Nancy Thing is always at my side.
To my star she’s hitched a ride.
Harry Thing makes quotes so snide.
Come November 2010 they’ll have no place to hide.

The sick and elderly will wait and wait.
Fate! Fate! Succumb to fate!
Death panels and abortions late!
The old the over-taxed young will come to hate.

ARE YOU A CITIZEN BORN AND TRUE?
ARE YOU OF THE RED, WHITE AND BLUE?

I keep my past full under wrap.
I will not, care not to my citizenship provide a map.

DID YOU NOT SWEAR UPON A BIBLE?
DID YOU KNOW THAT YOU ARE LIABLE?

I did swear upon a Bible.
I did not care that I am liable.
I did not dwell on my Kenyan family tribal.
I will not worry about birthers libel.

DID YOU INTERNALIZE KARL MARX?
DID YOU HOPE FOR CIVIL WAR SPARKS?

I did internalize Karl Marx.
I did hope for Civil War sparks.
I did not love America ever in my life.
I did not and neither did my wife.
I did not become President to bring you hope.
I care not; will not because I’m no dope.

I became President to bring you change.
With communist failure that is destructive and strange.