On the Culture Wars front, the British supermarket chain, Tescos, struck a blow for sartorial dignity in its St. Mellons in Cardiff, Wales branch by posting a “Customer Dress Code Policy” banning shoppers coming in clad in pajamas, barefoot and/or both. 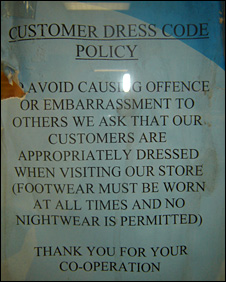 Signs saying, “To avoid causing offence or embarrassment to others we ask that our customers are appropriately dressed when visiting our store (footwear must be worn at all times and no nightwear is permitted).” have been placed at the entrance to the store in what Americans will recognize as a variation on our “No Shoes, no shirt, no service.” domestic stores policy although here in open-carry Arizona, “no weapons allowed” signs give a regional variation that must make the Nervous Nellie crowd feel better.

Back at the St. Mellons Tescos, outraged customer, Elaine Carmody, was actually turned away when she tried to buy cigarettes because of her sloppy and routine PJ bottoms and slippers wear.

Calling the banning of PJs as “pathetic” and “ridiculous”, the 24 year old, said, “If you’re allowed to wear jogging bottoms, why aren’t you allowed to wear pajamas in there, that’s what I don’t understand? I think it’s stupid really not being allowed in the supermarket with pajamas on.”

“It’s not as if they’re going to fall down or anything like that. They should be happy because you’re going to spend all that money.” 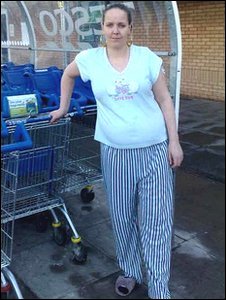 Clueless shoppers like Carmody show a disturbing confusion between “the customer is always right” and a complete lack of personal self-respect and discipline. They are exhibiting, broadcasting actually, carelessness about themselves and ultimate contempt for others.

It used to be that whoever roamed about in their PJs was usually an escapee from a lunatic asylum. Now it’s SOP for slobs in the US and it’s worrying to see that the fad has spread to the UK. In fact, in California, they have “Come to School in your PJs” day which immediately makes one think that the school principal involved is a pervert of some type.

Our American TV version of What Not To Wear constantly takes on the PJs-as-outer-wear phenomena and the fashion disaster du jour routinely whines about how they, “…want to be comfortable.” Show co-host, Clinton Kelly, always snaps back with a, “…but we have to look at you!” comment about respecting one’s self and the venue one is in.

Jogging, track wear and sweat suits do show up as inappropriate Sunday wear in US churches and even at special occasions like Baptisms and funerals. While it can be argued that as long as you are in prayerful mode, God is pleased but the pastor and the rest of the congregation certainly aren’t. They are keenly aware of the insult even if the wearer is blithely ignorant of the message of disrespect that they are sending.

Going anywhere barefoot is just plain unhygienic and dangerous especially considering the preponderance of discarded hypodermic needles left by junkies at beaches and playgrounds. Broken glass is everywhere including the interior of supermarkets. Considering that many people do not bother curbing their dogs or scooping up the feces afterwards, an unshod romp in the park and stroll through the produce section afterwards is enough to gag a maggot.
No doubt multi-culti fanatics will start squealing in outraged defense of the national wear of Pakistan, a.k.a. “Pakistani pajama” outfits falling into the nightwear category but seeing foreign dress on residents of the US, UK or any other First World Western nation is a loud and clear indication of refusal to assimilate. And that is a whole different front in the Culture Wars.

It Sure Looks Like CBS News Edited Body Cam Footage to Omit a Key Frame in Adam Toledo Shooting
Townhall
'Horrendous public health messaging': Pres. Biden and VP Harris were doubled-masked while meeting the Japanese PM
Twitchy
Men Are Getting Tired of the Hyper-Sexualized Woman
Redstate
Joe Biden a No-Show to Greet Japanese PM—and the Preview of a President Harris Is Awful
PJ Media