Drugged Out Of One’s Gourd 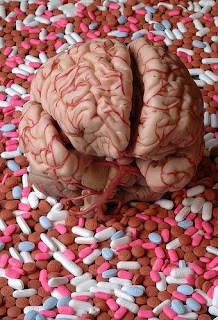 Poor Labour Prime Minister Gordon Brown of the UK has been the subject of some scurrilous web rumors lately that he is “self-medicating” by popping pills in order to “get himself through” his high pressure/low respect days.   Who could blame Brown, if he took to at least the bottle after not only being snubbed five times in a row to get a bilateral conference with US President Barack Obama but ended up disgracing himself and his country over the Lockerbie bomber release-for-oil fiasco earlier on?  Brown strikes me as a scotch and soda sort of fellow, who drinks in private but that old adage about never drinking alone because, if discovered, it will only arouse pity comes to mind here.

Normally, web rumors are just that and usually go no further especially in a country where the media works hand-in-hand with the government.  The pro-Labour BBC is solidly leftist these days so Brown was not expecting the sucker punch live interview question on BBC TV by UK political presenter, Andrew Marr, when Andrew asked point blank, “…something everybody has been talking about in the Westminster village… A lot of people in this country use prescription painkillers and pills to help them get through.  Are you one of them?”

Brown, of course, reacted in outrage because the insinuation carries behind it the acknowledgment that Labour has lost the approval of the media.  Earlier in the week the UK’s political Rasputin of the Left, Business Secretary, Lord Mandelson, commented that he could easily work with the Tories should have let everyone know that Labour’s days in power are numbered.

Andrew Marr’s question is also interesting on a different level because, quite frankly, it needs to be asked of all the world’s current leaders.  Drugs, booze, decadent excess, jet lag and plain old mental instability would go a long way in explaining why we’re all in this hand basket and where we are all going.

We can skip over Hugo Chavez of Venezuela, Kim Il Jong of North Korea and Ahmadinejad of Iran since each one merits a complete analysis of their own.  They are obviously crazy but, the way they game the West in general and the US in specific, shows that they are crazy like foxes.

Coming over to the US, Can you imagine anyone within America’s slavish Main Stream Media connecting the physical and mental damage that their beloved demigod, King Obama the First, Last and Always, incurred from his former pot and cocaine use or from his current smoking and liquor intake?  Obama is always jetting off here, there and everywhere in order to avoid more pressing issues at home so wouldn’t jet lag alone short circuit him?

What about Speaker of the House, Nancy Pelosi?  She swings wildly in her accusations, lies outright about the CIA, disappears when the heat is on, indulges in paranoid fantasies about non existent rightwing violence while remaining mute about actual leftwing violence and compulsively nips-and-tucks for a better camera image.  Somehow, though, I don’t think Botox alone is to blame here; her bullying, lack of emotional restraint and wild facial contortions are not the actions of a rational individual.  Pelosi is the type of person who gives bi-polar disorder a bad name.

Senator Kennedy is mercifully gone to where he can no longer cause this country mischief but the booze and broads brigades all up and down the East Coast are still holding candle light vigils for him.  It would be interesting to have a study done on all the members of Congress in both the House and the Senate to see who is on what.  State and local governments need to be looked at too.  With all the drugs flooding in to this country, someone besides down-and-outers is using them and heavy drug use in college usually follows the user into adult life.  If those adults attain positions of power then that TV anti-drug ad using a hot frying pan prop as drugs then dropping an egg to sizzle away as it fries as a brain on drugs might explain the laws currently being formulated in DC.

Quite frankly, nothing makes sense anymore and evidently that’s just the way the ruling elites like it.  Their socialist agendas trump your Constitutional rights and that’s it from now on as far as they are concerned.  However, perhaps instead of the Andrew Marresque question of, “What drugs are you on?”, it might be more germane to ask the Democratic Party and, yes, the RINOs and their behind-the-scenes financial backers, corporate sponsors and globaloney mover and shakers, “Just who do you people think you are?”