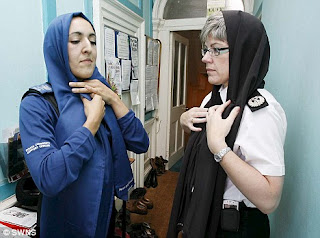 While the rest of the fashion world is buzzing about US First Lady Michelle Obama’s new up do that took her from a Laura Petrie wannabe into the Victoria Beckham top not crowd, a bizarre little news story about a disturbing trend in British headwear has largely gone unnoticed. Yet the implications of the article are far reaching and an ultimate threat to the authority of police women in all Western countries.

So let’s visit the seemingly obliging police force of Avon and Somerset in England to see how the secularist state’s mania for political correctness has come up with an uncalled for catering to Islamic “sensitivity” concerning community relations. In a move that only those in love with subservient dhimmitude status can dream of, non-Muslim police women in Avon and Somerset now are issued with headscarves to wear when they enter local mosques on police business. There are somber black scarves for police uniforms and blue ones for Police Community Support Officers.

Naturally, Muslims were delighted to be consulted especially since modern Islamic headscarves are a sign of political resistance to Western culture and not a religious requirement although politically minded Muslim women within the UK’s police and medical establishments already clamored for and got uniform style hijabs accepted for their professions. No matter what the sex of the wearer, when you strip away a part of a police officer’s uniform, you symbolically strip away the power and the authority of the office. It’s the same reason why security guards’ uniforms so closely resemble police uniforms; there is power inherent in the outfit. Police uniforms are a visible sign of authority, which carries not only the full support and approval of the state, but also the compliance and respect of the citizenry.

In effect the Islamic communities in Avon and Somerset have neatly reduced the female side of the secular police force to lower status than their male counterparts. They have also made the non-Muslim female British police officers exponents of Islamic veiling resistance too and one wonders now if, when carrying out actual police business, these same female officers would be barred from the men’s section in the mosque. In Islam, a woman’s word is only half that of a man’s so would two women police officers be required for one report?

Of course, the butter-wouldn’t-melt-in-their-mouths Muslim community leaders have nothing but praise for this latest Sharia-style development. City of Bath Imam, Rashad Azami, stated: “This will go a long way in encouraging a trustful relationship between the police and the Muslim community.”

Then the director of Bath’s Islamic Society, Mr Azami, had this to add, “The police have been working closely with the Muslim community in the area on many levels for the last few years.”

However, one needs to note what Abu Waleed of the London School for Sharia has said about the UK’s domestic policies and its push for Muslim integration into UK society, “The domestic policy of the British government is enough to radicalize you.”

Waleed, who considers Islam “superior”, rejects integration as a “conspiracy” by the British government against the Ummah, i.e. the whole Muslim world including those pockets of Islamic communities ever-growing within all of our countries today.

So, police women of Avon and Somerset in the UK and eventually Dearborn, MI and Huston, TX in the US, today it’s the scarf but maybe tomorrow it’s the burqa even topped off with the niqab. Or maybe, since Muslims frown on women working outside of the home, your police careers may soon be very short-lived.

Hey, but don’t let that worry you; evidently the big political fashion news taking up editorial time right now between the US and the UK is debating the merits of the high-waisted “Mom jeans” worn by President Obama when he threw the first pitch at a St. Louis baseball game and the vacationing UK’s Prime Minister, Gordon Brown’s chinos.

The liberal, Main Stream Media has to put everything into perspective, don’cha know…

CNBC Host Laughs at Pete Buttigieg Trying to Sell 'Infrastructure'
Townhall
Clean up, aisle 5! Brit Hume uses the PERFECT quote to DROP the media and sum up the REAL issue Republicans have with Liz Cheney
Twitchy
The Left Is Anticipating President Trump's Indictment in New York but They Haven't Thought About What That Means to Everyone
Redstate
BREAKING: Maricopa County Election Audit Uncovers 'Significant Discrepancies'
PJ Media