With exactly one week left before one of the most important mid-term elections in America’s history, a certain party has once again decided to throw out the rule of law.

True the Vote is getting results…

The problem, it seems, is that the Democrats don’t care that it’s their organizations responsible for this and then, the Justice Department, which turns out to be a highly politicized and racist organization these days won’t prosecute.

So systemic fraud goes unchecked, and tacitly approved. And what is particularly galling is that those who risk exposing the fraud are then accused of racism and then sued. The criminals, in a sense, count on not being examined because the charge of racism is so toxic–especially to conservatives.

But we know this fraud exists Democrat-wide and it’s not a black phenomenon. Blacks just happen to be overwhelmingly Democrat.”

Houston Votes has done much grandstanding since the accusations of fraud were leveled against them in a document released to the public. 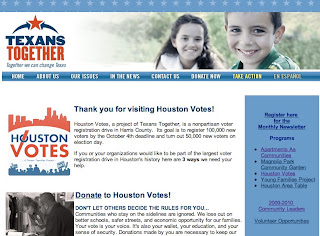 While the group has been accused of ACORN-style voter registration fraud, it does not have any direct links to ACORN.  But State Representative Kirsten Thibaut does have strong ties to ACORN in her past and does sit on the advisory board of Texans Together Educational Fund, the parent organization of Houston Votes.

However, most will argue that Thibaut’s past associations have little do with her current position. Or do they? Meet Fred Lewis.

“The ethics reform lobbyist and campaign finance lawyer has launched a new nonpartisan voter registration drive that targets what he calculates are the 600,000 unregistered adult citizens there out of about 2.3 million who are eligible to vote. His team wants to sign up 100,000 of them — all in time for the November election. He sat down with the Tribune last week to talk about the project, Houston Votes 2010, which he hopes will get at least 50,000 new people to the polls.

Part of what makes Lewis believe he can meet that ambitious goal is the success of a similar effort administered in 2008 by the Texans Together Education Fund, a grassroots community outreach program that he founded. It registered 24,000 low-income residents, 65 percent of whom actually cast a ballot.”

Lewis has been described as a community organizer and has established a number of non-profits over the years. In the spirit of ACORN’s Wade Rathke, Lewis’s ventures appear to be all interrelated supporting organizations. One of those organizations is Campaigns for People. Lewis focused on campaign finance reform and used the same “corporate money” argument that Houston Votes has used against True the Vote.

“Our No. 1 enemy is cynicism,” said Fred Lewis of Campaigns for People Monday morning, as he unveiled a new TV ad designed by the CFP to “drive people to our Web site” – www.cleanuptexaspolitics.com – and encourage them to get involved in organizing for campaign finance reform. The 30-second ad features a cigar-smoking representative of the “big-money boys” delivering a contribution worth “a year’s worth of wages” for most of us, and a fleeting vision of headlines announcing “the indictments coming down.” 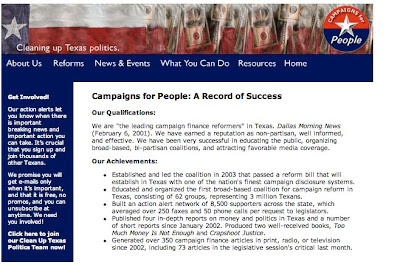 Who directly supported the work of Campaigns for People? Why Kristi Thibaut’s Texas ACORN. Click pictures to enlarge. 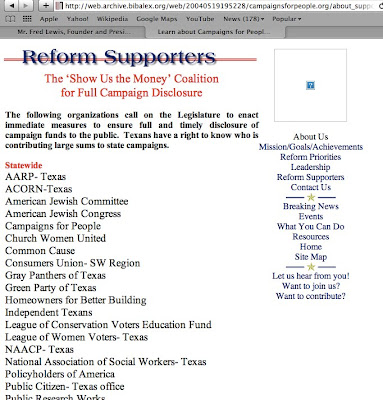 This is what the Campaigns for People’s site looks like today. 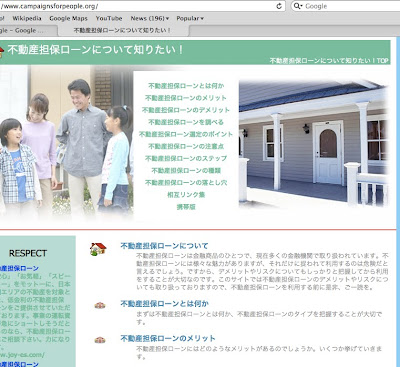 Someone went through a lot of trouble to hide their tracks and even the Clean Up Texas Politics site has been scrubbed.

Lewis is also an active board member with Texas Impact. A group that held Townhall meetings with ACORN as late as 2008. 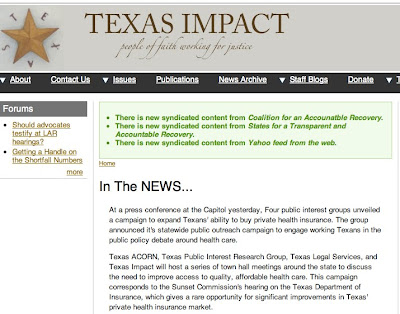 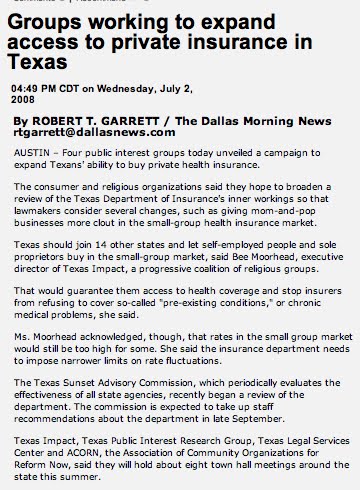 As this reporter has stated in many speeches, the white liberals behind ACORN are all to willing to use blacks and other minorities as pawns in their political power games. It appears that the same groups from 2004, 2006, and 2008 are now registering voters under a different name and hiring their old friends as “advisors.”

The King Street Patriots and True the Vote have uncovered the covert actions of ACORN and the Democrats -with the backing of the Obama administration – are poised to destroy them.

All eyes should be on Houston. If Democrats succeed in a state like Texas, ACORN will be registering 10 year old’s next year in red states around the country. Tomorrow, a part two will examine the key players and their motivations in more detail.