What happens when citizens decide to stand up and ensure the integrity of elections? In the age of Obama, they are investigated by the Department of Justice.

“Obama’s Department of Justice has suddenly turned on a dime, becoming the great pro-active protector of voters’ rights:

‘Poll watchers in Harris County, Texas — where a Tea Party group launched an aggressive anti-voter fraud effort — were accused of “hovering over” voters, ‘getting into election workers’ faces’ and blocking or disrupting lines of voters who were waiting to cast their ballots as early voting got underway yesterday.

Now, TPMMuckraker has learned, the Justice Department has interviewed witnesses about the alleged intimidation and is gathering information about the so-called anti-voter fraud effort….

Terry O’Rourke, the first assistant in the Harris County Attorney’s office, told TPMMuckraker that there have been allegations of poll watchers talking to voters, which they are not allowed to do, as well as hovering over voters as they are waiting to vote. He said the complaints came from Kashmere Gardens, Moody Park, Sunnyside and other predominantly minority neighborhoods of the county.’

…Obama’s politicized Justice Department has already lost all credibility when it comes to even-handed administration of justice on this matter. They let the Black Panthers off with one wrist-slap and two complete dismissals after their flagrant voter intimidation was caught on tape. Now they’re worried about poll watchers “talking to voters,” at a time when local Texas officials are preventing people from voting if they are wearing Gadsden Flag pins?”

An interesting fact about this so-called investigation is that the group, True to Vote, had already contacted the DOJ regarding the extreme irregularities related to the voter registration drives in the state. Click to enlarge. 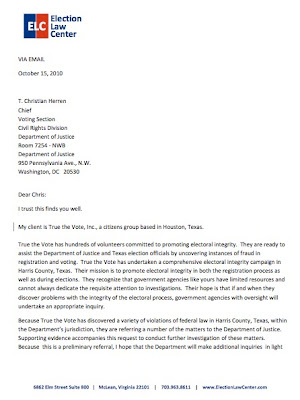 They recognize that government agencies like yours have limited resources and cannot always dedicate the requisite attention to investigations. Their hope is that if and when they discover problems with the integrity of the electoral process, government agencies with oversight will undertake an appropriate inquiry.

Because True the Vote has discovered a variety of violations of federal law in Harris County, Texas, within the Department’s jurisdiction, they are referring a number of the matters to the Department of Justice

Because the Department has civil oversight of the Help America Vote Act, and criminal oversight of non-citizen participation in federal elections, I presume that the results of this secondary inquiry will be of great interest. In the meantime, I believe there is sufficient evidence to open an investigation into whether or not non-citizens are being improperly registered to vote in Harris County. As you know, the Department has conducted extensive litigation throughout Texas to enforce Section 203 of the Voting Rights Act. My client would urge you to consider tackling problems of registration fraud there with similar zeal.”

Adams includes a number of exhibits with the letter to illustrate possible voter fraud. Among the findings of True the Vote are:

Persons claiming to be noncitizens have been registered to vote in Harris County. 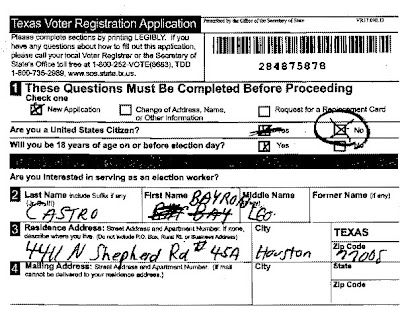 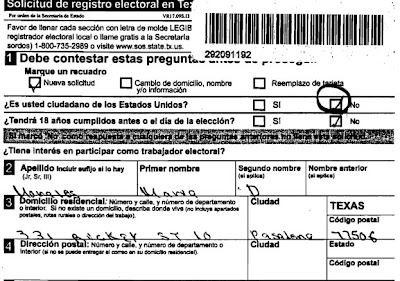 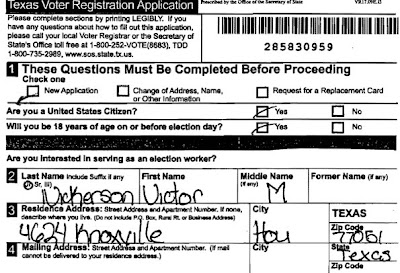 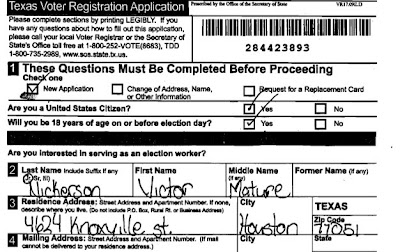 The recurring theme of the Obama administration is corruption and instead of being lauded for being responsible citizens, True The Vote has been sued, harassed, and accused of voter intimidation.

‘In a story that’s sure to draw comparisons to the New Black Panther Party member who brandished a nightstick at a Philadelphia polling place in 2008, a Tea Party group called the King Street Patriots has been accused of ‘1960s style’ voter intimidation in primarily minority precincts on the first day of early voting in Texas. The group is being sued by the Texas Democratic Party, following the filing of 14 voter intimidation complaints with the county clerk, and another two dozen with the Texas Democratic Party chairman.’

Catherine Engelbrecht, founder of King’s Street Patriots strongly denies the allegations and noted that it was absurd that ‘little old ladies’ would be intimidating anyone. She says that one 65 year old woman poll watcher came back from poll watching, after being kicked out for simply being present–itself a violation of the law–in tears…

In one instance, three poll watchers were yelled at by a Democrat Harris County Commissioner El Franco Lee who said,’Why are you here? We have never had poll watchers here. Ya’ll need to get on out of here.’

The actions described by the poll watchers indicate that the Democrats are desperate. Numerous articles by media outlets on the left claim voter intimidation because ordinary citizens decided to become active participants in our electoral process. In the tradition of ACORN-style intimidation tactics by the left, can those poor citizens expect to be targeted at their homes? Democrats only want poll workers who are trained by ACORN using tax dollars. 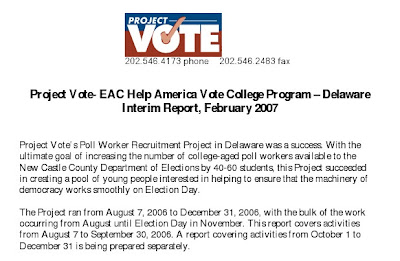 Not only does Project Vote have a history of engaging in election season shenanigans with ACORN involving thousands of duplicate registrations, but the group’s reporting on the grant is pure fiction. In a 2007 email, Nathan Henderson-James of ACORN Political Operations advises staff on how to “make it look good” regarding the money given to tax exempt Project Vote and used by ACORN. Click Pictures to enlarge. 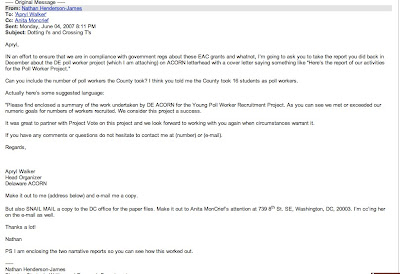 It is equally disturbing that the grant in question is part of the Help America Vote College Program, administered by the U.S. Election Assistance Commission (EAC), a federal agency established by Congress in 2002 to provide assistance to states in the administration of federal elections. According to its website, since 2004, the EAC has awarded 72 grants worth a total of $2.4 million to recruit and train college poll workers. How much of that 2.4 million went to ACORN?

To be clear, according to Democrats and folks at the DOJ, ordinary citizens who want to ensure fair elections are not welcome at polling places without being accused of voter intimidation but ACORN receives tax dollars to train college students. With ACORN’s history of partisan and aggressive activity, I wonder if they would have qualified without Project Vote’s tax status and reputation.

Will the DOJ silence the efforts of True the Vote or help them expose fraudulent voter registration drives? Will Democrats succeed in painting ordinary citizens as racists? As the election draws nearer, every American should be asking themselves these questions. If citizens are not allowed to expose corruption and fully participate in the electoral process our votes will be diluted by those with partisan political intentions. It’s up to all of us to stand with True the Vote and demand an investigation into the voter fraud in Texas.