Late last month when the RNC announced that it would cut its get out the vote (GOTV) program, conservative groups around the country adjusted and decided to run their own GOTV programs. But what does the RNC’s decision really mean?

“The Republican National Committee has decided against sending Congressional staffers out on the campaign trail for traditional get-out-the-vote efforts, focusing its resources instead on mailings and other last-minute pre-election efforts, the committee confirmed Tuesday.”

Lately, it has seemed like the RNC has gone the way of the Obama administration and ignored the will of the people. With serious missteps in key races and a national morale problem, the RNC really doesn’t get it.

Dana Loesch reports that after a few posts on Twitter that the RNC responded:

In light of the recent criticisms against the RNC, with the Hawaii conference, Steele’s cross-country tour, I can see why the RNC would want to rectify an ineffective and expensive program to ward off further accusations of wasteful spending – so long as the money saved stays with their GOTV efforts, which Heye explained that it would.

‘We have 352 victory offices funded by us throughout country. We’ve crossed the 20 million contact threshold – contact in messages left, door knocks, phone calls. We’re ahead of where we were in 2008 and in the next five weeks we’ll have a minimum of two million more contacts.'”

Does the RNC only read the New York Times? Have they paid attention to the countless articles by conservative journalists, bloggers and organizational leaders? GOTV is key the winning an election. A copy of the “proprietary and confidential” “After Action” report from the data company used by the DNC, ACORN, SEIU, Obama for America/Organizing for America contains startling facts and figures that need viral attention fast. 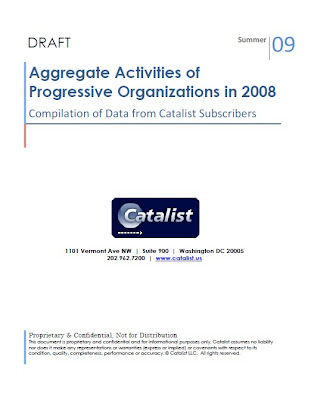 “The Association of Community Organizations for Reform Now or ACORN spent a number of years perfecting an organizing model that resembled that of Catalist and the Obama Campaign. ACORN’s close ‘affiliate’ Project Vote detailed their efforts in a 2007 report:

‘The Pilot Technology Project carried out during the summer and fall of 2006 was a first attempt to integrate the potential of high quality enhanced data developed for voter participation programs with on-going grassroots community organizing programs. Building upon the work of Catalist (formerly Data Warehouse LLC), Project Vote deployed an updated version of our online voter management system (VBASE) to enable local community organizations to access a robust voter file with enhanced phone numbers, geographic and demographic information for use in voter mobilization, membership development and organizational capacity building.’” 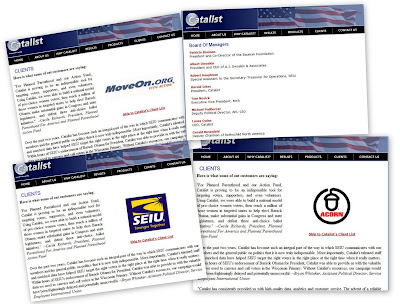 In 2008, years of coordination between leftist groups like SEIU, ACORN, Emily’s List and Obama/Organizing for America, resulted in a turbo charged election cycle unlike none other.

“Get-out-the-vote operations mounted by the Obama campaign, the Democratic Party and progressive organizations mobilized more than one million dedicated volunteers on Election Day. But it was buttressed by a year-long, psychographic voter targeting and contact operation, the likes of which Democrats had never before participated in. In 2008, the principal repository of Democratic data was Catalist, a for-profit company that acted as the conductor for a data-driven symphony of more than 90 liberal groups, like the Service Employees Union — and the DNC — and the Obama campaign.”

While the Atlantic reported on the story, many on the Right may not understand the total impact of the body of work from these so-called progressives. 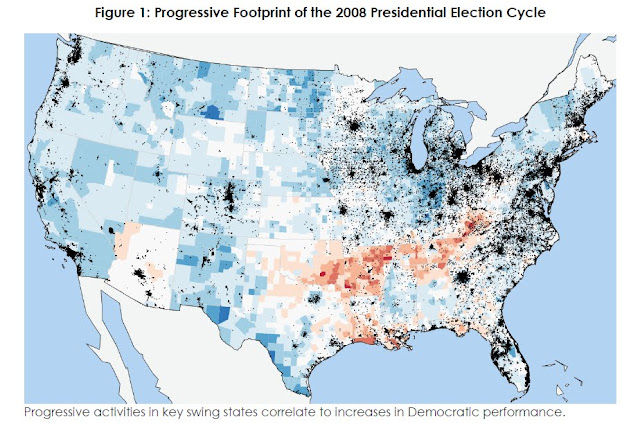 A look at the Numbers

According to the report:

The dialogue during the 2008 election cycle was one of change and blaming the outgoing administration for America’s troubles. This message was not only reinforced by the media, but also with a barrage of emails, calls, visits, etc. from progressive organizers in the weeks before the election. Obama’s margin of victory was born out of these contacts.

“The number of votes cast by new voters who were registered by progressives exceeded Obama’s margin of victory in four states: OH, FL, IN, and NC. “ 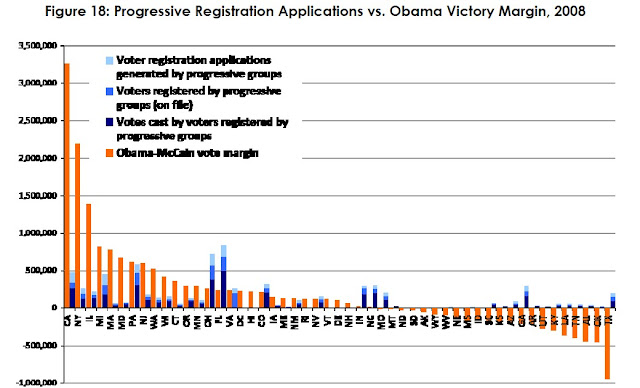 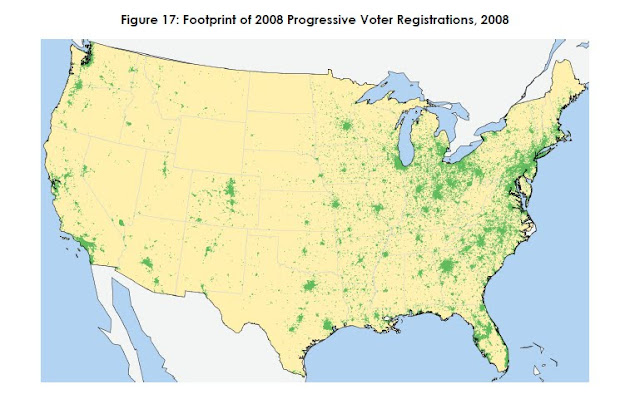 The massive voter registration drives that many were made aware of in 2008 generated over 7 million new applications with the report stating that at least 76% from groups not directly affiliated with a candidate or campaign. The report also notes that only about 5.5 million made it onto the voter rolls. The left calls them “true registrations.” What about this other two million cards? Duplicates? Fraudulent registrations? Ineligible voters? While the left tends the downplay voter registration fraud, the type of activities that garner over two million bogus registrations should be investigated.

Get Out The Vote

Progressive groups have proven to be ahead of the curve in regards to voter contact and the numbers show that their efforts pay off at the polls. According to Catalist:

RNC are you listening? Face-to-face contact, not paid media or mailings resulted in at least a 10-point increase in turnout. 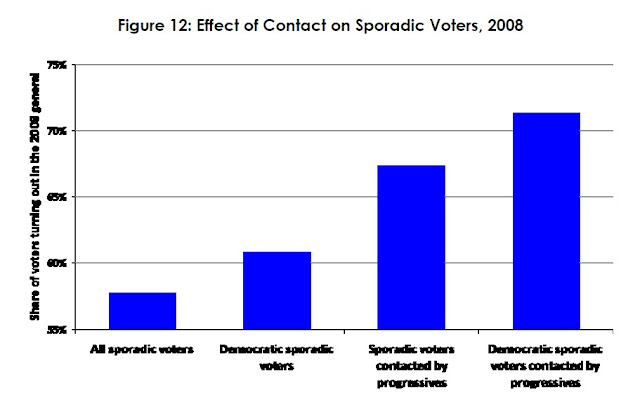 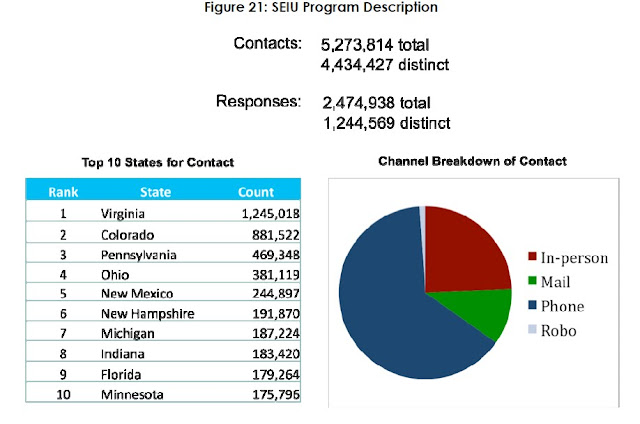 Though Service Employees International Union (SEIU) is now under investigation regarding a pension scandal and the activities of former leader Andy Stern, they had a banner year in 2008.  By far, Stern earned the privilege of  frequent White House visits and the president’s ear by delivering big numbers for Obama in 2008. With tens of millions of dollars invested in Obama, the SEIU ground troops worked feverishly to turn voters out to the polls. 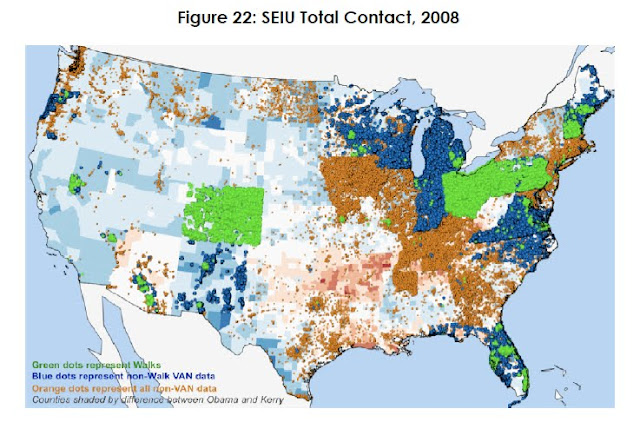 The stark reality is that the left is better organized and their leadership more motivated in getting boots on the ground. With their sophisticated micro-targeting, the left is able to identify individual voters in precincts that are more likely to vote for their cause/candidate. This means that folks on the right are rarely contacted and may not be aware of the scale of these operations. By flying under the radar, the left has a guaranteed tactic to sway elections their way. Don’t allow yourselves to be blindsided this November.

Who’s working in your community? Not the RNC, but this year, like 2008, you can bet that progressive groups are on the ground spreading their message of racial divisions, big government and more spending.