Why Georgia's 12th CD Should be on Everyone's Mind

When Howard Dean implemented his “50 State Strategy” most, including some in his own party, considered his plan to be unworkable and more importantly “unwinnable”. After the resounding sweep of the Democrats in 2006 and Obama in 2008, the RNC has only feebly attempted to replicate this strategy.

“As chairman of the party, Dean created and employed the ’50 State Strategy’ that attempted to make Democrats competitive in normally conservative states often dismissed in the past as ‘solid red.’ The success of the strategy became apparent after the 2006 midterm elections, where Democrats took back the House and picked up seats in the Senate from normally Republican states such as Missouri and Montana. In the 2008 election, Barack Obama used ‘The 50 state strategy’ as the backbone of his candidacy.”

As the November 2010 mid-term elections rapidly approaches it  is now even more important to focus on every race, every state, and every primary. Blogger Melissa Clouthier describes the problem in the Republican party:

“The Republicans conceding in between elections as well as races, themselves, has been a tremendous source of irritation. It is one thing to microtarget and write off a district because it’s ‘unwinnable’. The problem is that too many areas were written off that could, in this election, be won. And now, with no foundation there, it makes the task of winning more difficult. Texas isn’t the only place this has happened. In fact, this is a problem nationwide for Republicans. With a lack of organization and get out the vote effort and the lack of relationship building, many potentially winnable races will be lost simply because there is no there, there. It’s been conceded.”

Clouthier’s article includes a review of a primary race in a solidly red state of Georgia. In Georgia’s 12th Congressional district candidate Ray McKinney is running a tight primary race against former fire chief Carl Smith, Jr. McKinney, a former supporter of Smith, has run a solid campaign while Smith has been embroiled in a number of ethical situations reminiscent of Democrat candidates. This is where the problem lies, as the Tea Party activists have become more politically savvy, every candidate must be held to a higher standard. To ensure a government that is free of corruption, the people must be willing to expose those within their own party whose actions are not aligned with our values.

According to the Savannah Business Journal:

“On June 9, Thunderbolt Town Council terminated Smith’s $52,000 a year position as Thunderbolt’s Fire Chief. The reasons behind the termination have publicly varied – officially it’s financial reasons, unofficially Smith took too much time off to campaign, and to Smith it’s all politically motivated…”

According to local reports, Smith was advised by former congressional candidate Wayne Mosley, members of the 12th District executive board, and Ray McKinney, that to avoid appearance of conflict of interest, he should resign as Fire Chief to run for Congress. Obviously Smith declined that advice and now there are allegations by concerned citizens in the district that not only was Smith an absentee fire chief but that he may have violated the Hatch Act.

” The Hatch Act of 1939 was introduced to prevent corruption in government and elections. Its main provision prevents federal employees from engaging in partisan political activity. However, it also applies to employees of state and local governments…..

Currently in Georgia’s 12th congressional district, a public official who has applied for and received federal funds in his capacity as chief of the Thunderbolt Fire Department is in violation of the Hatch Act.”

The report alleges that Smith, in his role as Fire Chief, used his office, uniform, and vehicle to campaign for public office in violation of the Hatch Act. Evidence included screen shots of Smith’s website which show him in various official uniforms on his campaign website and in fund raising letters like the ones below. 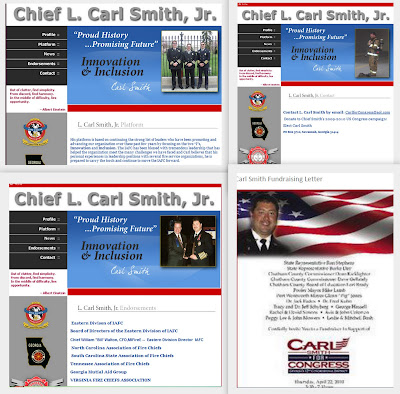 The report also includes information on the Federal funds that Smith had either applied or lobbied for in his capacity as Thunderbolt Fire Chief. 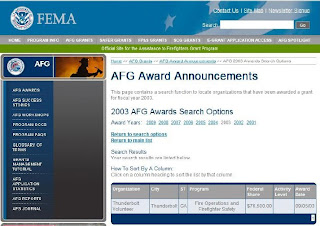 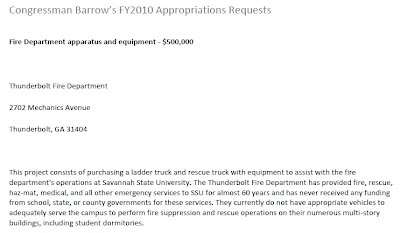 As the report points out, politicians in others states have been found in violation of the Hatch act for amounts less than shown above and in one instance, the state of Utah must either forfeit federal funds or force a state senator to resign.

Ray McKinney’s camp is taking this primary seriously and according to the Savannah Business Journal, has raised $100,000 already. McKinney, who I met at the Southern Republican Leadership Conference in April, and again in DC over dinner, has been endorsed by local Tea Party groups and One Nation PAC,  has been praised by the NRA and has a plan to clean up the Gulf oil spill. 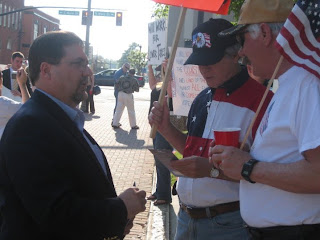 Character counts in selecting elected officials and Republicans must be willing to recognize the early signs of susceptibility to corruption within our ranks. When representatives go across the aisle on votes like Cap and Trade or Wall Street reform, voters are left wondering what happened. That’s why every race counts. ACORN, the Association of Community Organizations for Reform Now, operated under the idea that “all politics is local.” As seen in other districts like California’s 37th Congressional district where Star Parker is running to unseat Representative Laura Richardson, a corrupt local politician can became a national problem with the outcome of one election.

If Republicans introduce their own problem candidate into the November 2010 election, they run the risk of handing that district over to a Democrat who will capitalize on Smith’s current troubles.

Smith’s ethical issues only highlight McKinney as the viable candidate and a costly run-off will distract from the main goal for putting the Democrat candidate on the defensive. If Republicans unite in GA-12, McKinney is the best choice for a sustainable conservative majority. To donate or find out more information about McKinney, go here. Every race, every state.