Did Jack McConnell Lie About ACORN During His Confirmation Hearing?

The ACORN apologists over at Media Matters were hard at work last week as they took time to once again whitewash or ignore the truth in order to protect ACORN. Even though Media Matters claims that my article titled “Radical Judicial Nominee Jack McConnell’s Disturbing ACORN Connections” is “nothing new” and the connections I drew in the article “between ACORN and progressives” are “even weaker than previous conservative attacks,” Media Matters apparently felt a need to try to refute it. Why write about “nothing new”?

Unfortunately for Media Matters, its arguments only work as long as its readers are content with ignoring key facts about ACORN and its role in politics, elections and government itself.

As stated in my previous article posted at many websites, including BigGovernment.com, there are several disturbing connections involving Jack McConnell, the lead paint litigation, and ACORN. Keeping in mind that this is the same “news organization” that still insists that ACORN’s alter ego Project Vote was totally separate from ACORN when Barack Obama worked for them, I will let ACORN’s own words explain its involvement in the Sherwin-Williams California case. The excerpt below is from page 59 of an ACORN report available here (click to enlarge). 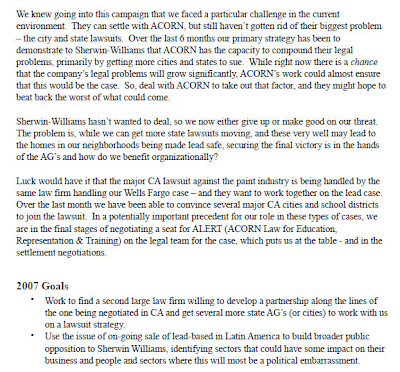 Why would Media Matters ignore ACORN’s own words? For the same reason it tries to dismiss my article as a conservative attempt to use ACORN as the “boogeyman.” By omitting the fact that I worked for ACORN and testified against ACORN/Project Vote in 2008, Media Matters hopes to downplay the significance of my knowledge of ACORN’s inner workings and its relationships with others.

In fact, while in the DC office of ACORN/Project Vote I worked on projects that allowed me to discover that among the donors to Project Vote was the private law firm involved in the California lead paint case. 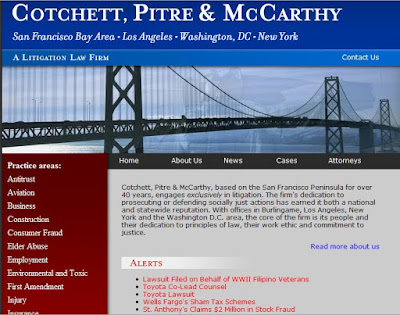 Court documents show that the petitioners, California counties and cities, had not only hired Jack McConnell’s firm, Motley Rice, but also “Cotchett, Pitre & McCarthy” (and others) to represent them against the paint companies (interestingly, the Santa Clara County counsel who initiated the lead paint case was appointed by the Obama administration to the Justice Department last year).

“Amy Schur, directing this effort, was vigilant, and having dogged them all year, has constructed a legal strategy with ALERT and the Cachet firm [sic Cotchett] that has now brought the cities of San Diego and Los Angeles into the lawsuit.” 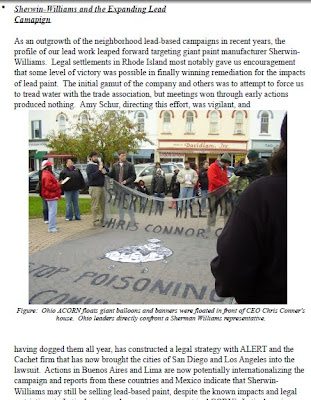 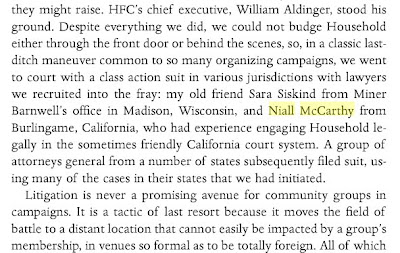 Wade goes on to explain how organizations like ACORN use litigation to gain power.

To recap for the Media Matters readers who may be used to having their news filtered:

Don’t be fooled by the misspelling in the ACORN report, Cotchett, Pitre & McCarthy is the same law firm that successfully represented ACORN in the Wells Fargo case.

In the proposed settlement, Wells Fargo Financial commits to continue for three years several improvements it had already put into practice, which have further strengthened its nonprime real estate-secured lending practices, and to implement other practices to benefit its customers. It also agrees to enact a default relief program, earmarking $2.4 million to provide relief to qualifying class members whose loans have become delinquent by more than 60 days. Qualifying class members who submit claims may also be entitled to cash payments, which will be determined using a formula to disburse up to $4.4 million.

The Association of Community Organizations for Reform Now (ACORN), a party to the lawsuit, had alleged that Wells Fargo Financial failed to adequately disclose points and prepayment penalties and had inaccurately reported loan balances on some of its California customers to credit reporting agencies.”

ACORN involvement in the lead paint issue was tremendous. Besides releasing reports and, staging protests (both national and international), ACORN even dedicated a separate website to the cause.

A reasonable person would say that given ACORN’s relationship with former Rhode Island Attorney General Sheldon Whitehouse and current United States Senator (an enthusiastic supporter of Jack McConnell’s nomination), and its work with Cotchett, Pitre & McCarthy on settlements, does raise the question as whether Motley Rice’s agreement with DuPont paint deserves more scrutiny.

“It’s odd and I think unlawful that the Attorney General, in a sense, appropriated the DuPont settlement moneys for his own purposes. It’s curious part of the money went to his alma mater, another part w[ent] to pay off a pledge made by Motley Rice to a Boston hospital, then the rest of the money went to the Children’s Health Forum, which is not based in Rhode Island at all.” 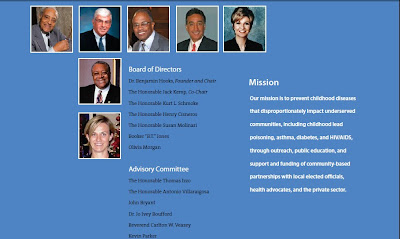 In 2009 Cisneros was honored for his commitment to ACORN while Villaraigosa engaged in crisis PR for the group. Side note:  Villaraigosa is also board members of the Institute for America’s Future, a group that goes out of its way to protect ACORN interests. 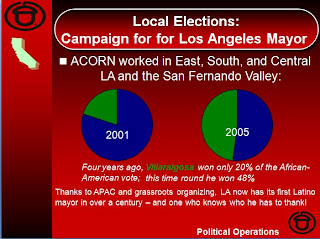 Either Jack McConnell’s law firm Motley Rice was totally oblivious to the FACT that Cotchett, Pitre & McCarthy were in the FINAL stages of securing ACORN a seat next to them  at the negotiating table or McConnell lied during his confirmation hearing (see transcript below)

SEN. KYL: I understand. My five minutes is up. It’s kind of hard to have continuity in questioning when we have this kind of limitation. I understood the point you were originally trying to make, but if I can — and I have a couple more minutes’ worth of questions just as a follow up to this.

My point really was not only, is it right to seek this as a movement, but whether you actually encourage these lawsuits in other states — you or your law firm — did you?

MR. MCCONNELL: No, Senator, we did not.

SEN. KYL: Are you aware of any role by the Association of Community Organizers for Reform Now — that’s ACORN — in how those cases might have come to be filed?

MR. MCCONNELL: No, neither I nor my firm have had any relationship with ACORN.

President Clinton said that his answer depended upon what the meaning of the word is is. McConnell might say that it depends upon what a relationship is. Apparently McConnell did not want to acknowledge any kind of relationship to ACORN by the time his confirmation hearing was held. Still, McConnell, his firm and ACORN are all connected. McConnell’s key role in the lead paint litigation in Rhode Island, where ACORN had a significant presence, and his law firm’s subsequent participation in the California lead paint case on the side of ACORN and its California law firm contradict his unqualified assurance that neither he nor his firm “had any relationship with ACORN.”

To quote from ACORN Report shown in the screen shots above:

p. 38: “Luck would have it that the major CA lawsuit against the paint industry is being handled by the same law firm handling our Wells Fargo case [Cotchett, Pitre & McCarthy]–and they want to work together on the lead case. Over the last month we have been able to convince several major CA cities and school districts to join the lawsuit. In a potentially important precedent for our role in these types of cases, we are in the final stages of negotiating a seat for ALERT (ACORN Law for Education, Representation & Training) on the legal team for the case, which puts us at the table–and in the settlement negotiations.”

P. 59: December 2006–“ACORN gets 2 cities and 2 school districts in CA to join a lawsuit against paint companies”