If elections were like football games, this would be your two minute warning.  All of the passion, energy and renewed interest in politics that propelled the tea party movement of 2009 opens the door to a new level of involvement. As patriot groups around the country prepare for the November 2010 elections, a quiet force has been building behind the scenes. 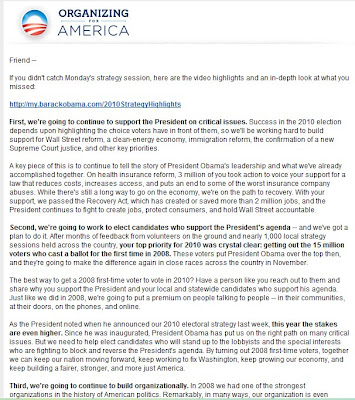 Investigative reporter Carol Greenberg’s work inside Obama’s Organizing for America has already helped expose the OFA’s connection to ACORN and its network of top Democrat party insiders. Greenberg’s latest article explains the OFA plan to deploy rapid response teams to Ohio ahead of the elections.

Any liberal discussion of Ohio includes the sentiment that “Ohio is ground zero for the left.” Long a playground for groups like ACORN, they conducted voter experiments, filed lawsuits against the state and their voter fraud shenanigans led to a civil RICO suit brought by the Buckeye Institute. ACORN’s settlement of the case required that it surrender its business license in the state.

Unfortunately for conservatives, the awareness of ACORN’s network of organizations and mob like behavior come at a time when he same political workeasily be done by Obama’s permanent campaign. A campaign that was absorbed into the Democratic National Committee after it ceased being Obama for America.

Obama’s ACORN cronies designed a system that could be substantial from any number of leftist organizations, including the DNC.

“Apparently, ACORN and Project Vote were ‘smack dab’ in the middle of another one of Obama’s voter registration drives. According to ACORN reports, ACORN was Catalist’s first client. Let me be clear, the ACORN VBASE, is the archetype of the Obama campaign. ACORN’s technology combined with union money elected a president.”

Draft slides of a 2006 Project Vote PowerPoint show that Project Vote’s method could produce the desired results to sway an election. 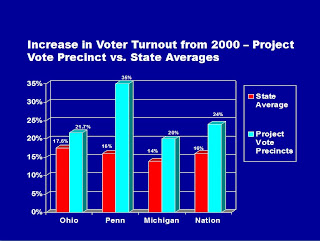 Critics of Project Vote and ACORN underestimate their effectiveness in contacting voters to move them on an issue or to the polls.

Other slides detail their plans to turn this Voter Mobilization Network over to the leftist friends (including the DNC). 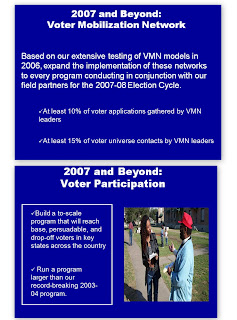 The left may scoff at whether this connection exists, but Karyn Gillette, then development director of Project Vote, also gave me a copy of the 2004 DNC donor list to work from. Karyn Gillette came to Project Vote from Ohio where she was employed by Secretary of State Jennifer Brunner.

“Maurice Thompson, the attorney handling the Ohio RICO action, told me late yesterday, ‘Evidence of collusion amongst ACORN, Project Vote, the Obama Campaign and Ohio Secretary of State Jennifer Brunner comes as no surprise to us — these supposedly separate entities appear to have been co-mingling funds, trading political tips, and helping each other gain power for years now.'” 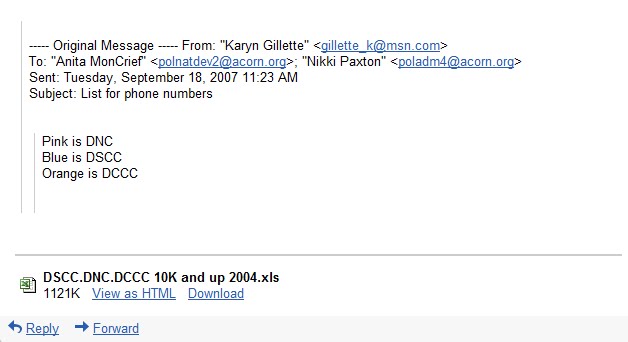 Though a number of news outlets like the New York Times had copies of the DNC donor list,  it was never made public, until today.

The OFA’s organizing machine can track millions of calls and mobilize countless volunteers and it would behoove the right to take notice. Twitter and Facebook may spread the message and connect folks but there is a serious need for some good old fashion grassroots door knocking. If conservatives are going to win in November there must be a combination of new and old organizing. In 2004 Ohio surprised the nation by going red for Bush. As many others have noted, there was initially a

…lack of outreach among African American communities. Karl Rove proved in 2004 with black voters in Ohio that persons should not assume that African Americans will consistently vote progressive.”

Organizing for America has stopped the game clock with the unveiling of Vote 2010. November is the goal and they have the ball. Kickoff events are scheduled around the country for June 5th. Inviting emails with subjects like “What are you doing Saturday?” are making the rounds. 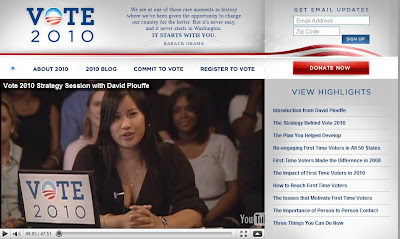 Conservatives, what are you doing this Saturday? If you want to win in November, it should be attending one of those kickoff parties. OFA, it’s the new ACORN. Learn who they are and how they operate. Click here to find an event near you or to sign up for their updates. If the OFA can continue to organize to pass Obama’s agenda and maintain the Congressional majorities, and all of the momentum of the past year and a half will be lost.

Want The Next Stimulus? Only If You're Immunized, One Congressman Says
Jennifer Van Laar

Brilliant: Amid COVID Closure, a Barbershop Beats the System By Reopening as a Film Studio
Alex Parker

Here's How Long Dems May Keep the National Guard in D.C.
Nick Arama

A Virginia Newspaper Introduces a Series on Race. But If You Can Believe Them, You Shouldn't Believe Them
Alex Parker

Bill Maher's Surprising Remarks About Trump Supporters and the Capitol Building Storming
Townhall
AOC warned them: FBI now reportedly interviewing people whose cell phones were *near* the Capitol on Jan. 6
Twitchy
In a Completely Unexpected Development, Biden Admits His Biggest Campaign Promise Was a Lie
Redstate
Disney Under Fire for Hiring Convicted Pedophiles to Work on Kids Shows
PJ Media