As patriots from across America prepare to descend on Washington, DC to protest the government takeover of health care, the Obama administration is touting the impending vote in the House of Representatives as “historic.” Progressive organizations have been preparing for the moment for decades and not even the outcry of millions of Americans will stop them from pushing their radical agenda through. 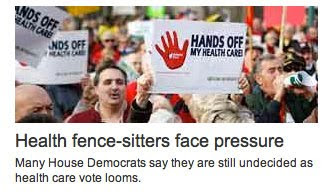 Ironically, the past week has been filled with numerous stories of how ACORN is disbanding across the country. News outlets from Politico to the New York Times run stories detailing the demise of ACORN. Of course, some are skeptical about whether ACORN is truly going away:

“In an age of lawlessness, rules for some out of government favor, and special privileges for special classes, racketeers and criminals need only change their suit and their hat and live another day to rob, steal, cheat, and engage in human trafficking… “

Conveniently for the Obama administration the “demise” of ACORN could not have come at a better time. As pictures of empty ACORN offices fill the news, Obama pushes forward with an ACORN planned and approved agenda. 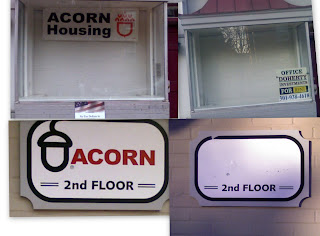 “P.S. ACORN’s grassroots leadership believes we are experiencing a once-in-a-generation opportunity and must not squander this moment. Your generosity is needed now more than ever. Thanks.” 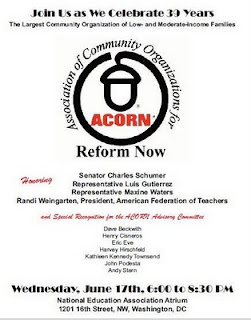 ACORN’s socialist agenda has always included some form of universal health care and like many of its “campaigns” this is not the first time ACORN has pushed for national change. The group, which was founded in Arkansas 40 years ago, maintained friendly relations with Bill Clinton when he was Governor of Arkansas and then President. The result of this relationship was HillaryCare. Americans fought back and ACORN was forced to back down. However, ACORN was not defeated and began to put a set of conditions in place that in the right political climate, would ensure victory. Michelle Malkin explains a 2008 ACORN memo on why Obamacare is so important:

“Why do they want Obamacare? An internal ACORN memo I obtained from August 2008 makes the motives clear. ‘Over our 38 years, health care organizing has never been a major focus either nationally or locally for ACORN,’ wrote ACORN Philadelphia region director Craig Robbins. ‘But increasingly, ACORN offices around the country are doing work on health care.’ The goal: ‘Building ACORN Power.’ The memo outlines the ACORN/HCAN partnership and strategy of opposing any programs that rely on “unregulated private insurance” – and then parlaying political victory on government-run health care ‘to move our ACORN agenda (or at least part of it) with key electeds that we might otherwise not be able to pull off.’

The objective, in other words, is to piggyback and exploit Obamacare to improve and protect their political health.” 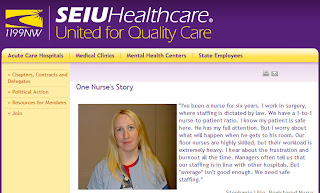 ACORN’s famous liberal experiments were never outwardly dubbed as socialist action items but within the ranks of employees we knew that what made ACORN great was “fighting capitalism.” By never using certain words with members and outsiders, ACORN painted a picture of the poor rising out of poverty and demanding their fair share. In 2006 ACORN partnered with SEIU on several healthcare campaigns across the country. 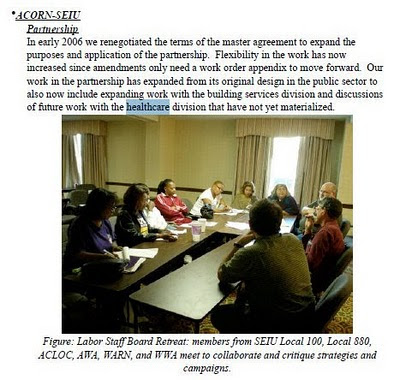 “Health: Last year (’05) we saved health clinics. This year we provided the field experience to win a form of universal healthcare. David Sharples staffed the leadership on the campaign with leader Gisselle Quesada. Using the tax program to survey people on health needs, we were able to build a quick base, identify members who could put a face on the problem, and move numerous members on multiple fronts to move the key supervisor and win the campaign.”

According to the 2006 report, ACORN has been working with hospitals to introduce “universal healthcare” at the local levels and that success was the precursor to Obamacare. 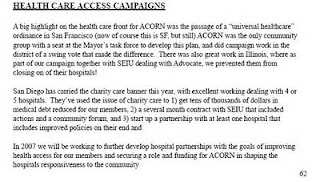 The excerpts above are from a 2006 report available here. 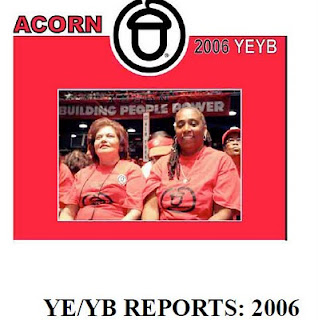 “Our issue-based GOTV program targeted some 686,796 people for an average of three contacts each. For example, Project Vote’s GOTV workers knocked on 396,273 doors in Ohio alone. Similar to our Voter Registration work, canvassers relate participation in the elections to salient issues in low- and moderate-income communities, such as healthcare…”

Critics on the left will state that it is a coincidence that ACORN and Obama’s old employer Project Vote are both advocating for government run healthcare, but all of the evidence suggests that Obama and Congress are settling debts with their old friends.

Before the ACORN embezzlement scandal and the prostitution videos ACORN was more open about its influence on Capitol Hill. The aforementioned 2006 report has another tidbit about the ACORN political machine:

Immediately after the 2006 mid-term elections when the Democrats took control of Congress members were made aware of who put them there. ACORN used its organizing and voter registration arms to set the stage for Obamacare. Newbies like Democrats Sherrod Brown and Claire Mccaskill were just as beholden to ACORN as long standing members of Congress from ACORN districts. The excerpt and screen shot can also be found in the 2006 report:

“Furthermore, we are working to make sure that key leaders in Congress fully understand the role that ACORN played in the 2006 elections: we are working collaboratively with the political department to ensure that the impact of our political work is widely known and appreciated.” 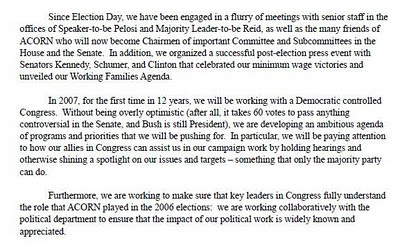 According to insiders, before the 2008 election ACORN and SEIU were so confident that Obama would win that a meeting in Santa Fe, New Mexico had an agenda that included a session entitled: Emerging Strategies III: Healthcare – Regime Change Priority with Richard Kirsch, Executive Director HCAN: Health Care for America Now

Regime Change?  A quick look at Wikipedia gives us an inkling as to what ACORN and SEIU are up to:

“In politics, a regime is the form of government: the set of rules, cultural or social norms, etc. that regulate the operation of government and its interactions with society. For instance, the United States has one of the oldest regimes still active in the world, dating to the ratification of its Constitution in 1789.

The term is also used to distinguish what is actually being enforced from what is considered legitimate. Enforcement of an unconstitutional statute would be a regime but not a law.“

IIf one follows the money, one name (not surprisingly) emerges: George Soros. The Soros backed Democracy Alliance has pumped untold millions into groups that include ACORN and the architect of Obama’s permanent campaign (Organizing for America), Harold Ickes’s Catalist. The Democracy Alliance vision includes changing America through initiatives like health care. 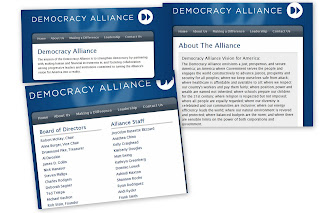 With leftist billionaires lining up to ensure a permanent majority, the march towards socialism has been a well funded one.

“…George Soros and other wealthy liberals formed a loose-knit group to consider how to fund a political comeback. Their answer: Create a permanent political infrastructure of nonprofits, think tanks, media outlets, leadership schools, and activist groups—a kind of ‘vast left-wing conspiracy’ to compete with the conservative movement. The group they created –called the Democracy Alliance (DA)…”

Though the fall of ACORN was not anticipated, ACORN like the DA is a taxable nonprofit and its structure allows for such restructuring. Taxable nonprofit?  Matthew Vadum explains:

‘It is a taxable nonprofit. Think of it as a corporation that does not make a profit and doesn’t aspire to make a profit. We’re an association of individuals….’

“In other words, the DA has no interest in asking the IRS to register it as tax-exempt or to allow contributions to it to be tax-deductible. Were the DA to request tax-exemption as a 501(c)(4) lobby group or as a 527 political group, it would have to abide by a dizzying array of legal constraints. Members of the Democracy Alliance may want to impose Big Government bureaucracy and red tape on Americans, but the friends of George Soros are too rich to be bothered.”

Was ACORN willing to go underground to save Obamacare? Is the Pope Catholic? ACORN’s own 5 Year Political Plan describes a structure that is local in nature and prides itself on being that way. 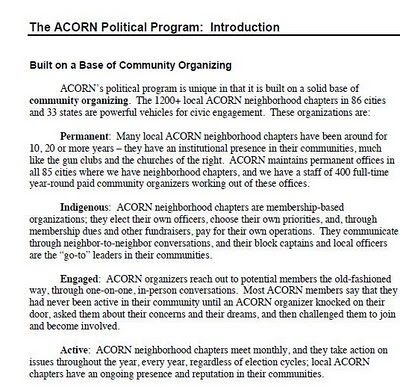 ACORN’s temporary fall from grace will allow it to go underground with the tacit support of the White House and use Obamacare to rally its base for a 2012 victory unless the ACORN roots of Obama’s socialist agenda are exposed.