Part II of our inside look at Organizing for America was inspired by the investigative work done by Carol Greenberg Thank you Carol for getting involved and driving this story.

From a tiny acorn, a mighty oak can grow. With ACORN’s help, Barack Obama “grew” from an ACORN community organizer and instructor, to an ACORN lawyer and ACORN benefactor as a board member of donor organizations, to an ACORN-backed Illinois state senator, to ACORN’s favorite United States Senator, to ACORN’s candidate for President of the United States in 2008. This article shows how ACORN and its allies helped organize America to make Obama President in this, the computer age.

Barack Obama’s meteoric rise from rookie Senator to President had man marveling at the efficiency and breadth of his campaign. Obama’s ability to fund raise had seasoned experts playing catch up while his voter registration money machine operated in the background. In 2008, the New York Times explored a seemingly innocent tactic the Democrats were utilizing to elect Obama. The article stated several times that the Republicans had honed this technique and Democrats were just “borrowing the play.”

“For years, Republicans had the landscape to themselves. More recently, however, Democrats, along with such allies as trade unions and progressive groups, have poured millions of dollars into building two formidable databanks. One is managed by the Democratic National Committee and can be used by candidates up and down the ballot. The other is Catalist, a for-profit company headed by Harold M. Ickes, a Democratic political operative, that specializes in providing data for scores of liberal groups supporting the Democratic ticket as well as for the Obama campaign itself.”

Progressive organizations, trade unions and a for profit group run by someone who had been implicated in the radical Teamstergate saga of the 1990’s? The crack reporting of The Times glossed over this toxic mix, and the Obama machine kept running. 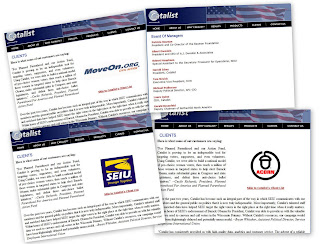 Harold Ickes‘ company, Catalist, has been credited with creating this machine:

“Catalist collects and stores millions of pieces of information from public records and commercial sources. In addition to voting rolls and tax information, it also has data about voters’ magazine subscriptions and their cars. Campaigns also contribute e-mails, cell-phone numbers and even times when people are likely to be home.

Ickes, 69, said that by using Catalist the Obama campaign is able to generate data as detailed as lists of swing voters who are home in the afternoon in a six-block neighborhood in Cleveland, Ohio. The list can even suggest which voters would be receptive to a pitch based on Obama’s ‘change’ theme, and which may be more interested in his health-care or energy policies.”

The origin of Catalist is intriguing and appears firmly rooted in the same community organizing spirit that has spread throughout the country.

“Even before I was an elected official, when I ran Project Vote voter registration drive in Illinois, ACORN was smack dab in the middle of it, and we appreciate your work.” –Barack Obama

The Association of Community Organizations for Reform Now or ACORN spent a number of years perfecting an organizing model that resembled that of Catalist and the Obama Campaign. ACORN’s close “affiliate” Project Vote detailed their efforts in a 2007 report:

“The Pilot Technology Project carried out during the summer and fall of 2006 was a first attempt to integrate the potential of high quality enhanced data developed for voter participation programs with on-going grassroots community organizing programs. Building upon the work of Catalist (formerly Data Warehouse LLC), Project Vote deployed an updated version of our online voter management system (VBASE) to enable local community organizations to access a robust voter file with enhanced phone numbers, geographic and demographic information for use in voter mobilization, membership development and organizational capacity building.”

Apparently, ACORN and Project Vote were “smack dab” in the middle of another one of Obama’s voter registration drives. According to ACORN reports, ACORN was Catalist’s first client. Let me be clear, the ACORN VBASE, is the archetype of the Obama campaign. ACORN’s technology combined with union money elected a president.

To understand the importance of Catalist to the Obama Campaign and later Organizing for America I have included the educational screen shot below. 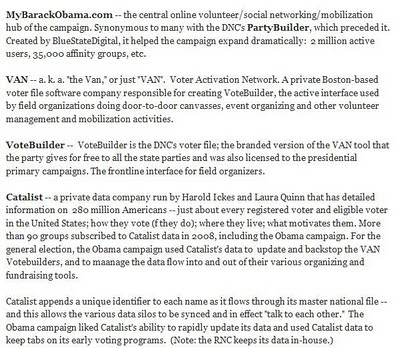 The writer of the article above sums up the relationship this way:

“Think of MyBo / Party Builder / VAN Votebuilders as being the tool sets and interface for volunteers, staff and field organizers, and Catalist as being the organizer and repository for the data as it flowed in and out of various OFA systems.” 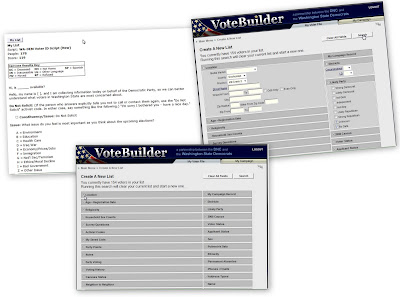 A 2005 Year End ACORN Political Operations PowerPoint further illustrates ACORN’s involvement in the creation of the system that powers the President. 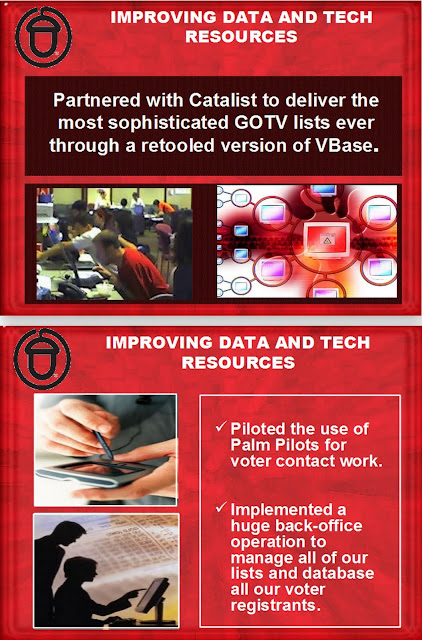 Matthew Vadum’s profile on the OFA offers some background on the major players but the hows and whys have largely gone unnoticed. In addition to a payment made from Obama for America directly to an ACORN affiliate, Project Vote managed to secure the Obama 2nd 2007 donor list. After all, this cross sharing among campaigns, non-profits and unions appears to have been the goal of the ACORN VBASE. A 2007 report the the Beldon Fund regarding a $75,000 grant lays the groundwork.

“The reason that VBASE, a customized database system has such value in the work of Project Vote’s field partners, such as ACORN, is because the model of groups like ACORN integrates year-round community organizing with heavy bursts of civic engagement work.” 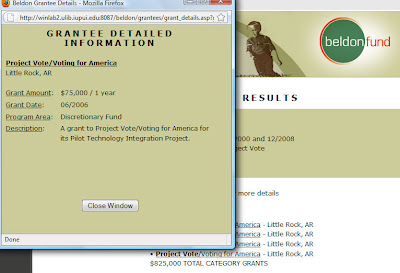 ACORN insiders describe the Obama presidency as a “once in a generation opportunity” and ACORN was prepared to make it happen. Research uncovered details the concerted effort of a myriad of non-profit, 527’s LINK and union organizations skirting campaign finance and IRS codes. While ACORN is not directly involved with the Voter Activation Network, ACORN affiliates/partners are. America Votes, SEIU, State Voices and even the DNC’s owned VoteBuilder share information through this alliance.

In 2007, Project Vote was ready to launch their “beta” phase of the VBASE project and targeted a state that had been made friendly by the election of ACORN ally Ohioan Secretary of State Jennifer Brunner:

“The initial beta version of our 2006-07 database was piloted in Ohio by one of our local community partners. This pre-launch was a bug-testing period for the new system, addressing issues of file access, remote support, and appropriate server load.”

Brunner campaign consultant, Karyn Gillette was set to join Project Vote after successful work on the Brunner, Sherrod Brown and ACORN connected Ohioans for a Fair Minimum Wage campaigns. Meanwhile, Obama was running a massive campaign in Ohio and ACORN’s partnership with Catalist allowed a for profit business to market their state of the art organizing technology:

“The success of this program is such that Project Vote will be incorporating it into its 2007-08 Voter Participation Program. While we are still wrestling with the details, we are committed to rolling out this sophisticated and robust system to support the civic engagement efforts of our local partners as they pursue voter registration and voter education programs and as they integrate those efforts into their on-going community organizing programs”

The perfect marriage of ACORN and Catalist was made possible by the deep pockets of the unions:

“Michael Podhorzer, Deputy Political Director of the AFL-CIO, has said: ‘Catalist is an essential part of the foundation necessary for building progressive political power in our country. The labor movement relies on the state of the art political technology services provided by Catalist and we are proud to be an early subscriber.’

Discover the Networks goes on to explain the motivation behind Catalist:

“Reasoning from the premise that the United States is a nation rife with racism and injustice, Catalist notes its commitment “to using [its] talents and technology to nurture a vibrant, growing, progressive community, and to working with that community towards a more just, equitable and tolerant America.”

Obama has repeatedly denied any real ties to ACORN. If Obama is lying about organizing, could this mean that there is another purpose over at Organizing for America. Over the summer the nation witnessed the President call out this ready brigade to pass health care and stifle dissent. It’s time for the mainstream media to focus on what ACORN is really doing. 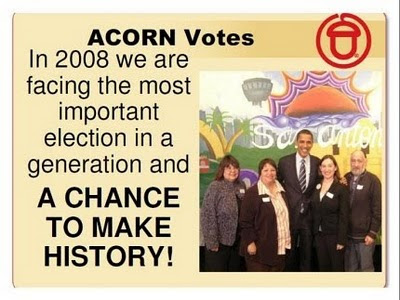 Without regard for tax codes or campaign laws; candidates and groups like America Votes, SEIU, Project Vote and other “progressive organizations” at times share staff, resources and donors. ACORN boasts over 440,000 member families and Obama benefited from the free flowing data between the campaign and ACORN provided by Catalist.  America is now facing a progressive agenda backed by a ready army of paid organizers trained in ACORN tactics, and the name Organizing for America seems to be missing a question mark.

Judge: Maxine Waters' Actions 'May Result in This Whole Trial Being Overturned'
Townhall
Judge in Derek Chauvin case says Rep. Maxine Waters may have given the defense something on appeal
Twitchy
BREAKING: Cause of Death for Officer Brian Sicknick Released, Major Blow to Media and Democrat Narrative
Redstate
Minneapolis Seeks to Ensure the City Will Burn by Crippling the Police Response
PJ Media