Will ACORN's Leftist Agenda be Thwarted by Scott Brown?

In a move that is oddly fitting for a President who failed to interrupt his Hawaiian vacation to respond to a terrorist attack, Barack Obama is heading to Massachusetts to assist his base of union and community organizers.

“Obama is headed to Massachusetts Sunday to campaign for Democrat Martha Coakley, whose race against Republican Scott Brown has narrowed to a toss-up as voters zero in on the cost of a massive health insurance bill in Congress.”

As the left struggles to maintain “Ted Kennedy’s Seat” the cracks are beginning to show in a radical agenda many believe was crafted by leaders at groups like the Association of Community Organizations for Reform Now. As Brown supporters eye the state warily, ACORN has largely gone underground in Massachusetts. Beginning in the 1970’s ACORN has operated silently in states across the country conducting “progressive experiments” in liberal states like Massachusetts through the use of organizing around ballot initiatives. 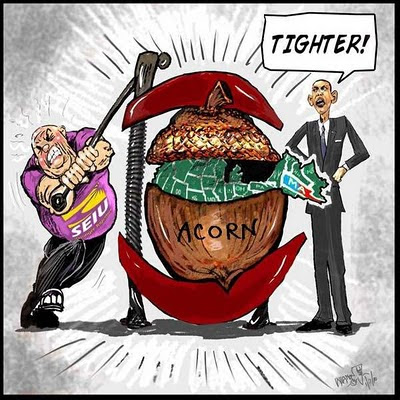 “Categorized by issue area, these totals encompass the estimated monetary benefits of some of ACORN’s major campaigns between 1995 and 2004, including:

Finally, ACORN has successfully increased the earnings of low-wage workers by allowing them to keep more of what they make. In Massachusetts, ACORN led a coalition that won an increase in the state Earned Income Tax Credit (EITC) in 1999, from 10 percent of the federal credit to 15 percent, or a 50 percent increase. According to the State Department of Revenue, close to $21 million additional dollars went into the pockets of low-income taxpayers annually after the increase was implemented.” 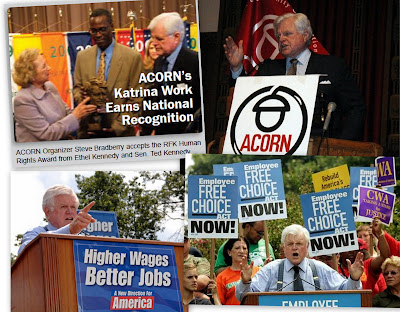 After the disastrous defeat of HillaryCare in the 1990’s, liberals began to operate under the idea that “all politics are local” and both before and after Ted Kennedy facilitated ACORN’s leftist agendas that were precursors to ObamaCare. In a 2006 report ACORN details its next steps after assisting Democrats with “taking back Congress:

Minimum Wage – Soon after the new Congress gets to work in January, both the House and the Senate are expected to move bills to increase the minimum wage to $7.25 an hours in three steps by 2009. While almost everyone believes this will pass (and Bush has indicated he will sign an increase), the fight will be over getting a clean bill – without poison pill amendments such as small business tax breaks or “protection” of small business from health insurance costs (read: higher premiums and insurance cut offs for our members). ACORN will take a leadership role in both raising the profile of the issue with our friends in Congress in select Congressional Districts in Dec and Jan – AND targeting some moderate Republicans and weak Dems who are more likely to go along with the poison pills.

Soon after we get the $7.25, Sen. Kennedy will introduce a more ambitious bill to restore the value of the minimum wage to its historic levels (more like $9.00/hr.) AND index it to inflation. We’ll likely have to fight for this bill for many years, and it is not likely to be a very big priority in year one, 2007.

Paid Sick Days – ACORN intends to make the fight for paid sick day a big one in 2007. To supplement our city and state campaigns on this issue, we will push for the Healthy Families Act (introduced by Sen. Kennedy and Rep. DeLauro), which would require employers to provide 7 paid sick days a year.

“The Working Families Party in New York and Connecticut continued to establish themselves shrewdly as political forces. The ballot project in Massachusetts to advance election opportunities (read fusion) made it to the ballot, which was never easy, but unfortunately could not overcome some of its negatives, so lost decidedly by a woeful margin, even in the trenches of liberalism. This will be something that we will have to answer in the future.”

As speculations of desperation regarding ObamaCare swarm around the Internet, see Hot Air, for example,  ACORN has continued working silently through partners like Emily’s List and America Votes. The ACORN agenda became the cornerstone of the Obama campaign and then presidency, with Obama and Democrats fiercely protecting ACORN along the way.

“In 2007, for the first time in 12 years, we will be working with a Democratic controlled Congress. Without being overly optimistic (after all, it takes 60 votes to pass anything controversial in the Senate, and Bush is still President), we are developing an ambitious agenda of programs and priorities that we will be pushing for. In particular, we will be paying attention to how our allies in Congress can assist us in our campaign work by holding hearings and otherwise shining a spotlight on our issues and targets – something that only the majority party can do.

Furthermore, we are working to make sure that key leaders in Congress fully understand the role that ACORN played in the 2006 elections: we are working collaboratively with the political department to ensure that the impact of our political work is widely known and appreciated.

Legislative priorities will include:

Immigration reform, which may actually move early next year.

A housing trust fund – which will make funding available for our development program.

Possible legislation on RALs, payday lending, and other predatory financial practices, as well as support for our VITA and benefit access centers.

As Coakley continues to make mistakes that would cripple anyone on the right, her status as an empty suit for the “Kennedy Seat” has almost reached satirical proportions. What ACORN and the Democrats did not count on was the same qualities that first made Kennedy appealing to voters are being exhibited by Brown. Brown’s supporters see him as a wild card, someone who is going to shake things up and listen to the people. Hopefully Ted Kennedy would be proud.

South African Doctor Who Raised Alarm About Omicron Variant: 'Symptoms Were So Different And So Mild'
Townhall
Security guard killed while protecting news crew covering a flash mob robbery in Oakland
Twitchy
This SNL Skit May Be the Funniest in a While, and Not for the Reason You Might Think
Redstate
Whose Land Did Native Americans Steal Before Europeans Stole It From Them?
PJ Media