Wade Rathke and the Myth of ACORN

Wade Rathke, former chief organizer of the Association for Community Organizations for Reform Now (ACORN), spoke at the University of Memphis yesterday and expressed his dismay at the current predicament ACORN finds itself in:

“Rathke stepped down from ACORN in 2008. Since his departure, ACORN’s been accused of voter registration fraud, embezzlement and worker misconduct. Hidden camera video made public earlier this year shows ACORN employees telling a couple posing as a pimp and a prostitute how to get around tax laws to make money.

‘It’s very worrisome to me,’ says Rathke, ‘having spent 38 years there. The notion that within one and a half years since I left, the organization could almost evaporate is just stunning and startling to me.”

According to reports, Rathke is pessimistic about the future of ACORN:

“The organization has become the focal point of the Right,” Rathke said during an interview before his speech.

“I don’t know if it can survive another year,” he said….

‘ACORN, Rathke said, serves an important function in a democratic society, in that it ‘provides a vehicle for community residents, particularly lower and middle income, to have a voice in affairs.’

‘You are going to have some people who cut corners, and do things that are irregular. ACORN made mistakes,’ he said.

Rathke said he was glad to be in Canada when the Baltimore video surfaced. “

“ACORN is one of the nation’s largest and most successful networks of community organizations, with over 230,000 low and moderate-income members organized into 1200+ neighborhood chapters in 104 cities across the country. Since 1970 ACORN has been building solidly rooted and powerful community organizations that are committed to social and economic justice, and have taken action and won victories on thousands of issues of concern to our members, through direct action, negotiation, legislative advocacy, and voter participation. Fundamentally, ACORN’s goal is to ensure that low and moderate income families have the power to act effectively on their own behalf in the struggle to build a more progressive America. ACORN helps those who have historically been locked out become powerful actors in our democratic system.”

Liberals cling to the myth of ACORN so they can claim that the “right” is trying to stop persons of color from getting ahead, or as it in known in an ACORN “rap,” “the man keeping a brotha down.”

Wade Rathke, a former member of the Students for A Democratic Society (SDS) and The National Welfare Rights Organization (NWRO) never intended for ACORN to be an organization that really helped poor people. Rathke, from all indications, wanted to use ACORN as a vehicle for political power. It is very telling that ACORN International – now Community Organizations International (COI) – was started after the embezzlement scandal. It appears as if Rathke wanted to secure his future and keep the money rolling in. Screen shots of his international work illustrate that Rathke intends to use COI to corrupt foreign electoral systems in the same way that ACORN has worked domestically. COI may have been started using tax dollars and non-profit tax exempt funds, but the organization has become a critical addition the the political landscape of quite a few countries. 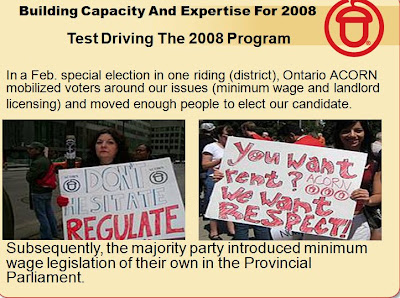 Not only are Rathke’s statements self serving, but he fails to admit that the initial cover-up of the embezzlement by his brother Dale Rathke may have contributed to ACORN’s current troubles. 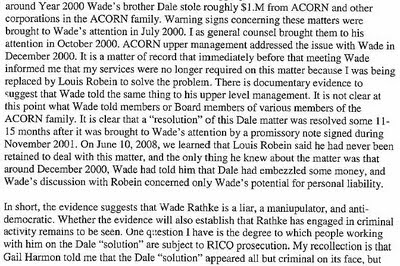 Furthermore, it appears that the Interim Staff Management committee (ISM) – which included members like Maude Hurd, Marcel Reid and Karen Innman – acknowledged  the difficulties associated with dealing with COI and Rathke, but decided to wait until ACORN could “get its paperwork in order.”

ACORN may be on the ropes, but its not down for the count. Wade Rathke  is successfully meddling in international affairs and Holder’s Justice Department continued reluctance to investigate ACORN may offer them a reprieve. Rathke appears ready to shake things up and start ACORN all over again, one country at a time. 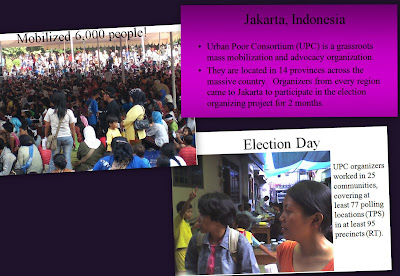