According to a report from Ohio today, a member of the House Oversight and Government Reform Committee has asked the ACORN-tainted Ohio Secretary of State, Jennifer Brunner, to investigation ACORN’s voter registration work in the state.

“U.S. Rep. Jim Jordan has formally asked Ohio’s secretary of state to look into allegations that ACORN had at least a preliminary plan to back Democrat candidates in key Ohio congressional races in 2008.”

The political plan was described in an October article as “having been scaled back,” and of course, ACORN denied any partisan activity.

“But to some, ACORN’s early 13-page plan for the 2008 election reinforces what critics always assumed: The group’s goal was never nonpartisan. The political plan and other ACORN documents show that the group was interested not just in helping presidential candidate Barack Obama, whom it urged its members to support, according to post-election Federal Election Commission reports. ACORN also was interested in Congress and the Ohio Statehouse.

“There’s no question that ACORN strategized to figure out how its election efforts could maximize the benefit for selected Democratic candidates in the most competitive races,” U.S. Rep. Darrell Issa of California told The Plain Dealer. “

An illuminating  fact not mentioned in either article is that ACORN prepared political plans for several key battleground states in 2006 and again during the 2007-08 election cycle. As evidenced by the draft plans developed in the Spring of 2006 by the Strategic Writing and Research Department (SWORD) of ACORN Political Operations, these plans were aimed at electing “progressives” and in some cases broke down the Congressional districts by race for maximum targeting. SWORD, which was staffed by Project Vote staff, including myself, worked with ACORN head organizers in FL, MD, MI, MN, OH, PA, and RI to create local documents for the ACORN field staff to implement and present to funders and/or various partner organizations.

A copy of the Maryland and Colorado draft plans from 2006 are available online. Key parts of the plans are the contact and Congressional district sections at the end. For example, in the Maryland plan, it calls for mailings and face to face contact. A screen shot of the type of mailing Marylanders received is shown below. 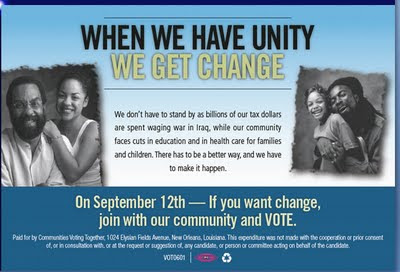 ACORN used Project Vote staff and computers to create the PowerPoint “Campaign for a New Congress.” This PowerPoint was aimed at swaying the Congressional election in Maryland from Albert Wynn to ACORN ally Donna Edwards. Using the final political plan, ACORN canvassed voters and mailed pieces through its affiliate Communities Voting Together.

Campaign for a New Congress

Communities Voting Together has the same address as the Project Vote office in DC and its address on the screen shot above is the same Elysian Fields address where hundreds of other ACORN entities “reside. 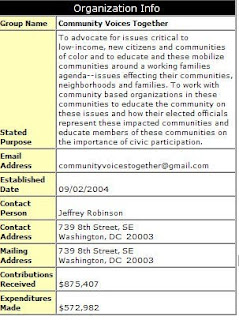 ACORN’s shell corporations make it easy for a political plan to become a partisan voter registration drive facilitated by thin veiled “partnerships.” The filing reports of Communities Voting Together raise a number of questions, including whether the misspelling of the name on the filing was intentional. The payments to various ACORN entities should give any astute lawmaker pause.

ACORN has been able to claim that it never worked in some recent elections including NY-23, but as this screen shoot illustrates, Communities Voting together was mailing and passing out door knockers in 2006 for Corzine in New Jersey (without a mention of ACORN).

Will ACORN backed officials like Jennifer Brunner (who has her eye on a Senate seat) and officials in Maryland and Colorado take notices of these obvious attempts to elect Democrats, or will they continue to turn a blind eye to ACORN in order to save themselves?