From the diaries by Erick.

As the nation watches the events in New York’s 23rd Congressional district unfold, an appropriate title for this story would be “How to squander money and alienate your base.” After the Saturday withdrawal of Republican Dede Scozzfava, the GOP is reeling from a massive insurgency by its conservative base. Of course, the story got stranger as Erick Erickson of Redstate reports:

“Dede Scozzafava is throwing her support to the Democrat, Bill Owens.

“She and her husband are working with union activists to drive the vote up for the Democrat.

“And Pete Sessions, Chairman of the NRCC, and Guy Harrison, Executive Director of the NRCC, still have their jobs and are failing to take responsibility for this disaster, instead blaming conservatives.”

In the GOP there are still some are shaking their heads and wondering what went wrong. The GOP nominated a “moderate” and if she happened to have big labor and ACORN ties, then so be it. For once, the elephant in the room was not the GOP but this blatant, illogical and damaging alliance it had formed with Scozzafava. As the Wall Street journal reports, this relationship would eventually set off a national chain of events:

“Saturday’s decision by Republican Dede Scozzafava to drop out of tomorrow’s special Congressional election in upstate New York is a potentially big political moment that could help to return the GOP to first principles—or could lead to internecine ruin. Much will depend on how GOP leaders and conservative activists respond.

“Picked by GOP elites without a primary and with a voting record to the left of many Albany Democrats, Ms. Scozzafava faced a revolt by local and national conservatives in favor of businessman Doug Hoffman, who was nominated on the Conservative Party line. The longtime GOP assemblywoman saw herself falling in the polls and yesterday endorsed Democratic lawyer Bill Owens, who could still win the GOP-leaning seat with a plurality.”

Republican liaisons with far left Democrats have already been detrimental to the conservative movement and Scozzafava’s ties to ACORN and their “affiliated” Working Families Party was covered extensively in the blogosphere. Top Republicans chose to ignore the corruption right under their nose and to sell out their base by following the Left’s mantra to elect “moderates”. These “moderates” tend to be leftists in Republican clothing. Kirsten Gillibrand is an example of a local “moderate” who abandoned her principles and base after being promoted from Congressperson to United States Senator. Republicans like Darrell Issa (who released a damning report on ACORN last July) backed Scozzafava while still pursing ACORN corruption.

In any partnership, there is compromise. Some compromise is acceptable, but fundamental values should not be compromised. When conservatives align themselves with polar opposites, it always seems that they are doing so because of race considerations or political expediency. During a panel discussion in which I participated on October 23, 2009, Cliff Kincaid of Accuracy in Media asked why Republicans in the Bush administration approved ACORN funding.

John Fund of the Wall Street Journal, replied that Republicans acquiesced with the pretense that these organizations are doing good work and that race is a major factor behind that acquiescence.

While partisanship should not play a role in exposing corruption, when that corruption is rooted in the pay for play politics that tip heavily to the Left, partisanship cannot be ignored. Nonprofit groups have been allowed to run rampant with charitable donations that somehow elect Democrats. To stop this trend, conservatives must become creative and steer clear of situations like the one in the NY 23 with Scozzafava. If such situations are allowed to continue, others will succeed in dividing the GOP from the grassroots conservatives, and thus strengthening the left.

ACORN is a Democrat scandal and it is hard to separate one from the other. Corruption is the overriding theme and it comes mostly from the left. Another particularly odd pairing continues to be the radical reformers of ACORN and top Conservatives and Republicans. The ACORN 8, a group of former ACORN board members, have formed a Scozzafava-like partnership with the Republicans. In attempting to expose ACORN, some appear to have ignored key facts and overlooked a pattern of withholding key information to coincide with opportunistic timing aimed at aiding Democrats. An example of this is the complete removal of two longtime Obama ACORN cronies from a complaint filed with the United States Justice Department last January by the ACORN 8. Madeline Talbott is described by Stanley Kurtz of the National Review Online as “the woman who first drew Obama into an alliance with ACORN.” And Keith Kelleher is Talbott’s husband, the Chief Organizer of SEIU Local 880 in Chicago. 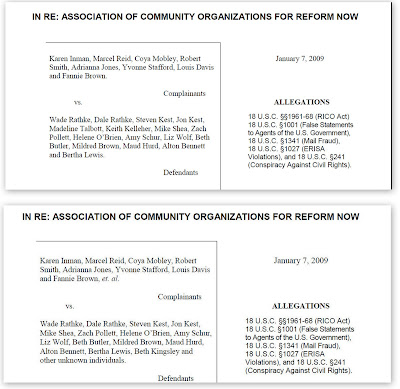 Another example of the GOP ignoring the evidence in front of it involves investigative reporting by the National Legal and Policy Center, a group that “promotes ethics in public life through research, investigation, education and legal action.” The NLPC uncovered more on ACORN’s relationship with Scozzafava. The GOP seems quick to support organizations and people with strong ties to ACORN as long as they technically are not ACORN. Unfortunately for conservatives, the credibility being bestowed on such groups receives little scrutiny beyond the blogosphere and Fox News . Key ACORN opponents have formed relationships of convenience with little thought to the outcome. As the NLPC reports, even the unions are involved:

“How did leading Republicans, some of whom (like Boehner) have been ACORN’s toughest critics, come to endorse a candidate with a history of endorsements by its main political front, the Working Families Party?” (emphasis mine).

Good question. In NY 23, the GOP candidate selecters chose to ignore the evidence of Scozzafava’s ACORN tainted background. Just as the GOP and Fox have also ignored the clear statement on the ACORN 8’s website which does not call for not for full truth, transparency and accountability by ACORN to the American people. Rather, as stated on the ACORN 8 website, they call for “truth, transparency and accountability within ACORN.” Apparently in exposing ACORN it certainly does not hurt to have a black face to speak about ACORN corruption. The color of whistleblowers should not be important, but their message should be.

When groups like the ACORN 8 speak to conservatives and tell them that ACORN was a great organization that was “hijacked” by some who had sinister motives, it’s believable if no one checks the facts. How can an organization whose founder remained in place for almost 40 years become hijacked? How can ACORN be reformed if the same longtime insiders are the new control group? This fiction must be exposed. Fox has been leading the way on exposing ACORN while other so called respected media outlets like the New York Times, finally admitted to having been continually scooped by Fox. But Fox needs to report all the facts to its viewers instead of promoting the ACORN 8 and wishful thinking.

As TV/Radio host Glenn Beck continues to expose the true subversive nature of ACORN, and Obama’s radical roots, he contradicts many of the assertions made by this group of reformers. Though no one ever mentions the distortions on air, one has to wonder if Fox is doing its viewers a disservice by aligning themselves with groups who support Obama’ s policy initiatives. As the conservative base mobilizes online, there is a disconnect between then and the so called leaders. The base sprung into action as a subsequent Glenn Beck boycott of advertisers begun by Van Jones and his organization Color of Change attempted to silence Beck and that same base is ready to fight as ACORN attempts to DeFox America.

Those outside of this boycott alliance spread the word on Twitter and Facebook about the Left’s attempt to silence Beck, while the ACORN 8 remained largely silent on these issues and others that concern the very people they fundraise and ask to support their efforts. Like the $990,000 the Republicans spent on Scozzafava, conservatives are being asked to foot the bill for a partnership that was never ideologically aligned with theirs. As stated, such partnerships are rarely mutually beneficial for long. While the Left exploits the fears of conservatives on the issues of race, conservatives must be willing to fight back and respond to the blows instead of merely trying to deflect them.

After watching the ACORN prostitution stings, Americans do not see ACORN as serving a noble purpose and one has to wonder what people were doing on the ACORN board for years. Marcel Reid was active in ACORN for nine years and her story that the ACORN board was “ceremonial” does not excuse any board member. She claims to have noticed ACORN corruption only after the embezzlement scandal was publicly reported. As a former employee who started in October of 2005, I was already calling the folks at www.rottenacorn.com by May of 2007.

The question now is whether the GOP can overcome its fear of being labeled “racist” by the left and learn to respond to these attacks. Fear of that seems to be the tipping point for their ultimately disastrous relationships with liberals who wish to keep Democrats in power.

Until and unless we conservatives form our own groups and become more involved in the communities of color, we will find ourselves aligned with every group that sprouts from the ACORN seed. ACORN 8 professes to love ACORN and does not want to see it dismantled, just “reformed. ” But ignoring the reality of the radical ACORN 8 potentially opens that door to other alliances with ACORN “insiders” who are willing to offer information in exchange for credibility and a chance to retaliate against the very control group that threw them out.