Because everybody fantasizes about how these conversations play out…

CARLA BRUNI SARKOZY: Michelle. Pet.
MICHELLE OBAMA: Hello, Carla. Isn’t the red carpet exciting?
CBS: ::yawn::
MO: Well… You’re looking very supermodeley today!
CBS: I know. You’re looking…noticeably more polished. Fabulous coat, really.
MO: Thank y—wait. What?
CBS: Oh. Darling. You know what.
MO: …the cardigans?
CBS: It’s just…well…to meet the Queen? A wee bit…cheeky, don’t you think?
MO: What? I thought I looked pretty.
CBS: For a tea party, I guess.
MO: We had tea!
CBS: Of course. Was that before or after you gifted the Queen of England with an iPod?
MO: You didn’t like that? We thought it was fun. And modern. Just like me!
CBS: Darling, no.
MO: No? Not…I don’t know…sort of whimsical? We uploaded showtunes, okay? That’s pure Americana!
CBS: Tut tut. No.
MO: But—
CBS: No. Smile for the cameras, darling.

So…Europe is all over this Michelle Obama person.

In between bites of Special K this morning, I was staring at an old issue of Vogue trying to figure out how in the world this woman has been successfully spun into some sort of A-list celebrity. Sure, she’s the FLOTUS, which means she sits one notch below POTUS and two notches below TOTUS (snark), but still…I just can’t comprehend. She’s nice-looking (or so they say), but she’s no Carla Bruni; she can hold her own in front of a crowd, but she’s no Barack Obama; she gives off all the appearance of a happy momma, but she’s no Angelina Jolie. I thought about it long and hard, and after breakfast I scratched out a few reasons why I think the world is falling in sloppy, disgusting love with Michelle Obama.

She’s not Cindy McCain
Climb on into my way-back machine and zap yourself back to the very, very beginning of Obamania. Remember how Cindy McCain drew all sorts of ire regarding her designer suits and fabulous shoes and highlights and Botox? Yes? Now, flip your brain over and hark back to how cool and awesome and so freaking special everyone thought Michelle Obama was for wearing “reasonably-priced” ensembles from (what I can only assume was) the brokedown soccer mom section of J Crew. What happened was that Cindy McCain was vilified as the evil white lady whose shoes were made with the sweat and despair of little Vietnamese slave children, and Michelle Obama was lauded as a woman of the people; advocate of the huddled masses, dressed in bargain items from JC Penney like common riff raff! Never mind that the Jimmy Choo pumps she wore on Inauguration Day easily cost around $800 dollars…

Her clothes are (sometimes) fierce
I have a dirty secret. I appreciate—nay, am having a sordid love affair with—fashion. Even the those weird, sort of questionably artsy fashion statements with big bows and over the top ruching and little bejeweled purses shaped like animals. I got incredibly excited when I found out Jason Wu was designing the inaugural ball gown. Anyway, Michelle Obama embraces classic and emerging fashion trends, and America loves her for it—
even when it doesn’t work out so well . I have to admit (and this is hard for me, because I am most decidedly not the FLOTUS’s biggest fan) that she looked like a rock star at the Inauguration; and, occasionally, I stand up and cheer for her liberation from this: 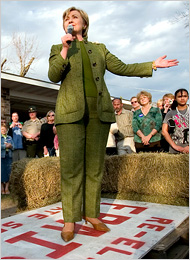 …which I think we can all agree is absolutely offensive. Anyway, fashion is fun, and we need a little fun in our lives, right? I know I do.

She likes to insult America

And that, my RedState minions, is the number one reason why people all over the world are drooling into their martini glasses over Michelle Obama. Yes, it happened a long time ago; and yes, those completely accidental ::snort:: faux pas were explained away by lots of hot air blown on the subject of race relations and slavery and conservative fascism and God knows what else. But you know what? I didn’t buy it then, and I don’t buy it now. As of late, Barack Obama has been prancing around the globe, ranting and storming to anyone who will listen about American arrogance and imperialism and any other disrespectful, insulting thing he could think of. Sane people were embarrassed, saddened, and justly angered by this chicanery; his flocks of liberal sheeple, however, were gratefully humbled by what their dear leader had to say, because after a proper period of reflection and thought, they would be able to stand up with severe looks on their faces and talk about how utterly disgusting the behavior of the American people has been, and how we would do well to take a lesson from those who choose to live in peace and harmony with the birds and trees and terrorists and oppressive Socialist bureaucracies. Same thing happened with Michelle Obama; her supposed “humble nature”, coupled with her honesty and desire to do some good in this crazy, mixed-up world (oh, SNARK), endeared her to the hearts of those who don’t have enough common sense to realize they’re being duped.

I have a great appreciation for pretty things. Michelle Obama has a lot of pretty things going for her: she has a handsome husband, beautiful children, and a wardrobe that would make me fall to my knees and weep if I ever saw it displayed in all its glory. However, I am seeing something very ugly in this woman so many are proud to call our First Lady. I think we need to stay aware of what she says when she opens her mouth, because people will listen to and accept her words for the same reasons that they listen to and accept the crap that flows out of the mouths of Susan Sarandon, Jessica Alba, and::insert your own celebutician here::, with little thought to the merit of what’s actually being said.

She’s been good since the inauguration, I’ll give her that much. But I do not have faith in any politician’s ability to keep its mouth shut forever (yes, I consider her a politician.); nor do I have faith in the American sheeple (not to be confused with the American people) to consider her words with discernment—especially when they’re being dazzled by her husband’s smile, and a couture gown worth more than your last five car payments combined.