What Bounce? Obama's Approval Collapses to 46%, Low of Presidency, After Obamacare

Cross posted from the site CentristNet. 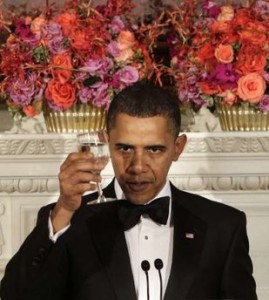 After last week’s historic passage of the Obamacare package, President Obama approval today matches the all-time low of his Presidency: 46%

In another crushing blow to the “conventional wisdom” of the establishment media that because “Americans love winners” President Barack Obama would receive a large, sustained bounce in approval after last week’s passage of Obamacare, today Gallup released its daily approval numbers showing Obama at only 46% approval, with 46% disapproving. Obama’s 46% approval in Gallup represents a matching of Obama’s all-time low in approval. While Obama did peak at 51% mid-week after the passage of Obamacare, he has now lost that entire bounce and is at the low of his Presidency, which completely repudiates the “conventional wisdom” in the establishment media.

The Rasmussen Reports daily Presidential Tracking Poll for Sunday shows that 28% of the nation’s voters Strongly Approve of the way that Barack Obama is performing his role as President. Forty-four percent (44%) Strongly Disapprove giving Obama a Presidential Approval Index rating of -16 (see trends).

The President enjoyed a modest bounce in the polls following the passage of health care legislation last week. However, his Approval Index rating is now back to where it was last Sunday, just before the House voted in favor of his health care plan. All the bouncing of the past week has come among Democrats. There has been virtually no change in the opinions of Republicans and unaffiliated voters.

White House spokesman is sure to face questions about this post-Obamacare collapse in the President’s approval ratings, as Gibbs himself last week tweeted out the Gallup one-day poll on Obamacare as a truthful and reliable indicator of the public’s views.

This continued collapse in Obama’s approval, with an all-time low of 46% in Gallup and a near all-time high in Rasmussen of 44% strong disapproval today, demonstrates the failure of the Democratic strategy to smear the tea party as racist extremists as well. Indeed, ABC/WaPo’s numbers this morning show the tea party is favorably viewed by the American public, despite this smear campaign by the Democrats and the establishment media. Numbers such as these are sure to encourage the Republicans to continue to attack the Obamacare package as a historic mistake and ensure that the cry of “replace and repeal” is heard in every congressional race across the nation in the leadup to the November 2010 elections.