Obama Fibs About Obamacare, then Quotes Lincoln "I am not bound to win, but I am bound to be true" 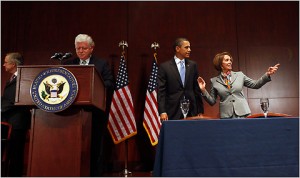 President Barack Obama, pictured here at the House Democratic Caucus meeting today, implausibly claimed that after the passage of Obamacare, all Americans will keep their present health plans and doctors despite clear indications to the contrary

In his last speech before the historic vote on his Obamacare package in the House of Representatives set for tomorrow, President Barack Obama gave a speech to a members-only House Democratic caucus meeting today.   In his speech, the President sadly repeated many of the same lies and misrepresentations he made yesterday at George Mason, including his false claims that everyone can “keep their doctor” and “keep their plan” while also falsely asserting that Obamacare will be an “historic” deficit reduction bill.  Obama made these claims despite their debunking by even establishment media sources many months ago, and the CBO’s addendum to their scoring made public late yesterday that reports an addition to the deficit of $59 billion over the next 10 years from Obamacare once the “doctor fix” is factored in.

“I am not bound to win, but I am bound to be true”

Apparently the establishment media has no interest in reporting on the explicit lies (you can keep your doctor, you can keep your health plan and Obamacare will be “historic” deficit reduction) repeated again by the President today, as the NYT, CNN, WaPo and the AP all focus on the rhetorical grandeur, the “history being made” and the “impassioned plea” in Obama’s speech to Democrats today while ignoring the substantively false claims made by the President.

Amazingly, none of the above-linked articles make any reference to the President’s claims that all Americans will be able to keep their doctor and keep their insurance after the passage of his reform plan; instead, the establishment media just completely ignores these explicitly false statements.

The Associated Press epitomizes the frenzied, wrongful efforts of the establishment media to cover for the explicit lies of the Obama Administration and Congressional Democrats regarding Obamacare, printing this as if it is fact:

The sweeping legislation, affecting virtually every American and more than a year in the making, would extend coverage to an estimated 32 million uninsured Americans, forbid insurers to deny coverage on the basis of pre-existing medical conditions and cut federal deficits by an estimated $138 billion over a decade.
…
Congressional analysts estimate the cost of the two bills combined would be $940 billion over a decade.

In repeating the explicitly false claims above, as made by Obama and the Democrats, the AP fails to mention the fact that the CBO admitted last night that Obamacare will actually add $59 billion to the deficit over 10 years when the pending “doctor fix” is enacted and further fails to mention that the CBO has also stated that at least $50 billion in additional funds will be required to administer Obamacare over 10 years after its passage, meaning Obamacare will add at least $109 billion to the deficit over the next decade. Sadly, that $109 billion in deficit spending resultant from Obamacare does not account for the many additional budget gimmicks used by the Democrats to entrench the false perception that the bill that creates over $100 billion a year in new federal entitlement spending will actually be an “historical” deficit reduction bill. Even the NYT’s Obama-loving (literally) columnist David Brooks listed the many ways the CBO score is explicitly rendered false by no less than seven Democratic “dodges” designed to game the CBO scoring process:

They’ve stuffed the legislation with gimmicks and dodges designed to get a good score from the Congressional Budget Office but don’t genuinely control runaway spending.

There is the doc fix dodge. The legislation pretends that Congress is about to cut Medicare reimbursements by 21 percent. Everyone knows that will never happen, so over the next decade actual spending will be $300 billion higher than paper projections.

There is the long-term care dodge. The bill creates a $72 billion trust fund to pay for a new long-term care program. The sponsors count that money as cost-saving, even though it will eventually be paid back out when the program comes on line.

There is the excise tax dodge. The primary cost-control mechanism and long-term revenue source for the program is the tax on high-cost plans. But Democrats aren’t willing to levy this tax for eight years. The fiscal sustainability of the whole bill rests on the naïve hope that a future Congress will have the guts to accept a trillion-dollar tax when the current Congress wouldn’t accept an increase of a few billion.

There is the 10-6 dodge. One of the reasons the bill appears deficit-neutral in the first decade is that it begins collecting revenue right away but doesn’t have to pay for most benefits until 2014. That’s 10 years of revenues to pay for 6 years of benefits, something unlikely to happen again unless the country agrees to go without health care for four years every decade.

All of the above-referenced “dodges” and gimmicks to obtain a good CBO score are based on publicly available information, yet nowhere in the establishment media can you find this information actually reported to rebut the ridiculously false claims by Obama and Democrats over the past few days that Obamacare will actually reduce the deficit and be “one of the biggest deficit-reduction plans in history.” The NYT yesterday even manages to lionize the CBO scoring as unimpeachable and nonpartisan while attacking those who dared to note some of the above-referenced dodges and gimmicks listed by Brooks. In short, the establishment media is allowing the President and the Democratic Party to use an explicit lie (Obamacare reduces the deficit) to sell their comprehensive plan to the American public without informing the public in any way of illusory basis for such claims. Such conduct is a true abdication of the 4th Estate’s role as a watchdog of the American government. 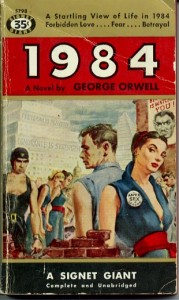 The Misinformation and Lies on Obamacare Presented by President Obama and Deemed by the Media as Truthful Remind Some of the World Described by George Orwell in his classic work, “1984”

Further, Obama concludes by claiming that Democrats must pass this bill for “the American people”:

“Help us fix this system,” Obama said. “Don’t do it for me. Don’t do it for Nancy Pelosi or Harry Reid — do it for all those people out there who are struggling. . . . Do it for the American people. They’re the ones who are looking for action right now.”

Finally, Obama today made the equally ridiculous claim that Obamacare “runs straight down the center of American political thought” and “is a middle of the road bill” and, again, no one in the media even bothers to rebut this claim with the obvious fact that the only bipartisan thing about Obamacare is the opposition to Obamacare, as at least 31 House Democrats are joining a unified Republican opposition to the bill. Sadly, facts such as these go unmentioned by the establishment media reports as they scurry to defend their hero President Obama as the final hours tick away before the all-important House vote on Obamacare.

When the 4th Estate (media) work so strenuously to support both the President and the Congress in an effort such as Obamacare, avoiding the reporting of any facts which could possibly hinder the Democratic effort to “remake one-sixth of the U.S. economy” while cheerleading every step of the way, the continued viability of the American political system moving forward can reasonably be questioned by centrists and independents as such coordinated misinformation brings to mind the world described by George Orwell in his classic work “1984″.  Should Obamacare pass the House and become law, years from now historians will review Obama’s speeches from yesterday and today and likely designate them as some of the most misleading speeches by an American President in the history of our country.

This New Peer-Reviewed Article Could Be a Game-Changer
Townhall
Gov. Doug Ducey throws ice-cold water on Trump's call to decertify the 2020 election in Arizona
Twitchy
Pelosi Backs off Monday Vote on Infrastructure, Which May Be the Death Knell of Biden's Agenda
Redstate
FBI Narrative About the Jan. 6th Capitol 'Insurrection' Is IMPLODING
PJ Media