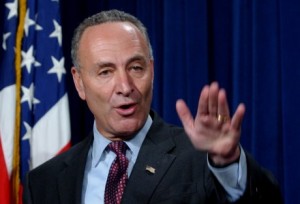 With the disclosure of Mobley’s ties to al-Queda leader al-Awlaki today, calls continue to grow for a wider investigation into facts surrounding the arrest and subsequent escape attempt of American jihadist Sharif Mobley in Yemen.  Democratic Senator Charles Schumer (D-NY) called for a wider probe:

(CNN) — A U.S. senator is calling for a federal probe into the system of background checks for employees at nuclear plants after learning that a suspected al Qaeda member from New Jersey worked at five such sites.

“We simply cannot tolerate at any time having someone with terrorist ties working at a nuclear plant, period,” Sen. Chuck Schumer, D-New York, said in a written statement Saturday.

“It seems like common sense but clearly we need to tighten up the system.”

Schumer’s comments focus attention on how an extremist like Sharif Mobley could have worked in US nuclear facilities and whether a more strigent background checks regime should be put into place.  Considering Mobley’s 2006 comments to acquaintence Ramon Castro to “Get the hell away from me, you Muslim killer!”, the fact Mobley passed a 2008 background check to allow him access to US nuclear facilities (according to PSE&G Nuclear spokesman Joe Delmar) is very troubling indeed.

Schumer’s comments may be an attempt by Democrats to get ahead of the story, something they failed to do in the case of the Christmas Day bomber.  In the days to come, we can expect calls for disclosure of the use of prior US intelligence regarding Mobley, such as whether Mobley was on the “no fly” list or whether he was free to return to the United States prior to the public disclosure of his arrest. Another issue is the interrogation of Mobley, which obviously is of supreme importance right now, to determine if any plot against a US nuclear facility may be planned by Al-Queda and its extremist cleric leader in Yemen, al-Awlaki.   Similar to the failed Christmas Day bomber Umar Farouk Abdulmutallab, it was disclosed today that Sharif Mobley had ties to al-Awlaki while in Yemen. This case may draw parallels to the case of the Christmas Day bomber, who was also known to federal authorities yet allowed to board the transatlantic flight bound for Detroit that he unsuccessfully tried to bring down.

Liberals Are Really Going to Hate Ron DeSantis Over Florida's Latest COVID Benchmark
Townhall
'It wasn't an accident': After Duante Wright's death, Rep. Rashida Tlaib calls for 'no more policing'; 'It can't be reformed'
Twitchy
It's Time to Call the Bluff of These Woke Corporations, Here's How to Make Them Pay
Redstate
Trump Vindicated as Judge Rules Michigan Secretary of State Violated Election Laws
PJ Media