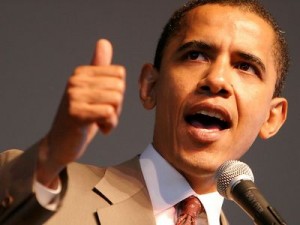 President Barack Obama received more bad news today regarding his sagging popularity with the American people, as for the first time Obama’s job approval amongst all adults, as measured by Gallup’s polling, fell to just 46% today. It appears that the American public’s approval of President Obama declines at times of intense focus on health care reform. As you can see from the chart below, Obama’s approval has been steadily declining since his Inauguration and has now reached the low of his Presidency:

With the next week or so being the final days before the all-important House of Representatives vote on Obamacare, Obama’s sliding approval numbers are sure to draw the attention of wavering House Democrats as they decide whether to side with the President and vote for his signature, yet widely unpopular, health care initiative or risk the President’s wrath by voting down Obamacare just days from now.

UPDATE: Ed at Hotair notes that the Congressional Democratic leadership has canceled all committee hearings and is meeting behind closed doors regarding Obamacare. Perhaps today’s Gallup numbers are a topic of discussion:

Faced with caucus members who aren’t responding to the normal arm-twisting, Nancy Pelosi and Steny Hoyer abruptly canceled scheduled committee hearings to call the party leadership into closed-door conference to plot strategy and tactics. That left Fox News with no one to discuss the events except Rep. Michele Bachmann (R-MN)

Pelosi has insisted that she has the votes to pass it, but the sudden dive behind closed doors suggests otherwise. If they had the votes, they’d produce the bill and schedule the roll-call vote.

When Keith Olbermann Throws the Word "Fascist" Around and Hits a Noted Libertarian, the Word Is Meaningless
Brandon Morse

'Death to Amerika': Is This Tehran or Is This Antifa?
Nick Arama