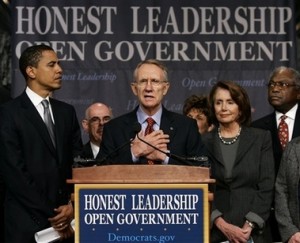 House and Senate Congressional Democrats, and representatives of the Obama Administration, met late into the night on Wednesday behind closed doors in House Speaker Nancy Pelosi’s office and apparently have come up with yet another, and final,  Democratic version of Obamacare, to be read to the House Democratic Caucus today, reports the AP about a hour ago:

WASHINGTON – A final agreement nearly in hand, President Barack Obama and Democratic leaders are about to embark on one last sales job that will determine the outcome of the president’s signature health care overhaul.

It will come down to a phenomenal effort by congressional leaders and the White House to win over skittish lawmakers after a year of incendiary debate, even as Obama keeps up campaign-style appearances designed to fire up public support.

Democrats still need to see a final cost estimate from the Congressional Budget Office — and want to ensure it stays around $950 billion over 10 years — but they made plans to begin to read the bill to rank-and-file Democrats at a caucus meeting Thursday.

“We’re going to get started,” Pelosi, D-Calif., said after her meeting with White House Chief of Staff Rahm Emanuel, Senate Majority Leader Harry Reid, D-Nev., and other key officials. Some unanswered questions remain, Pelosi said, “but we’re hoping that we’ll get those answered over the course of the reading. It’s not much.”

It should be noted, as it was not by the AP, that this final dickering and deal making between Democrats done behind closed doors last night was  without any transparency, punctuating a process of over a year of such backroom, closed door negotiations between Democrats regarding Obamacare. The AP apparently sees this backroom dealing and efforts to twist arms of reluctant House Democrats as “a phenomenal effort”, essentially playing the role of Obama Administration cheerleader instead of objective news organization.

Regardless, it appears that in the next week or so the House of Representatives will hold a vote on Obamacare, and between now and then the House Democrats who have refused to agree will likely be submitted to extreme pressure, in unison, from Speaker Pelosi, progressive interest groups, the establishment media and the Obama Administration. Retired Democratic Rep. Eric Massa provided a preview of sorts by describing the strongarming efforts of Obama Chief of Staff Rahm Emanuel over a prior vote, with Massa relating that a naked Emanuel charged Massa in the showers of the Congressional gym and screamed about Massa’s voting preferences while jabbing Massa in the chest with his finger.

While a repetition of Rahm’s nude finger jam is unlikely, as the days count down to the House vote, deals with individual House Democrats will be attempted, with promises of favors on other legislation or of increased campaign support or Administration jobs and threats of retribution for voting against Obamacare sure to intensify in the lead up to the House vote. As for President Obama himself, he plans on continuing the campaign speeches in various parts of the county to demand the passage of Obamacare now, as he exclaimed to the Missouri crowd yesterday, “[t]he time for talk is over. It’s time to vote. It’s time to vote. Tired of talking about it.”  The Obama Administration apparently disapproved of the inclusion of Obama’s claim that he is “tired of talking about it” in the AP’s article, as it was almost immediately removed from the AP feed after this morning’s publication.

Considering that after Obama shouted these words in Missouri, Democrats continued to feverishly engage in closed door “talk” over the actual legislative language of Obamacare, only reaching a deal late last night, yesterday’s presidential demand for the “debate” or “talk” regarding health care reform to be “over” is somewhat jarring, especially considering the President made similar comments last week and at various times since July 2009. Apparently closed-door, backroom negotiations between Democrats, such as the final private deal-making last night, is acceptable “talk” for President Obama regarding health care reform, but “talk” consisting of actual substantive negotiations with the GOP or any public, transparent negotiations over the language of the bill between Democrats is verboten.  Sadly, the text agreed to last night amongst Democrats will be withheld from the public for the next few days as sweetheart provisions are inserted to buy the needed House Democratic votes.

After the AP cheer leads by praising the Democratic effort as “phenomenal“, AP continues to further frame Obama’s health care efforts as a valiant “rescue mission” and finally lays out the shape of the Obamacare endgame to unfold in the days to come:

The current plan is for the House to approve the Senate-passed bill from late last year, despite serious objections to numerous provisions. Both houses then would pass a second bill immediately, making changes in the first measure before both could take effect. The second bill would be debated under rules that bar a filibuster, meaning it could clear by majority vote in the Senate without Democrats needing the 60-vote supermajority now beyond their reach.

Republicans have vowed to do everything they can to thwart the plan, and for the Democrats, some policy questions remain unsettled.

Obama already has moved to eliminate a couple of special deals in the Senate bill that turned off voters when they became public, including extra Medicaid funding for Nebraska — derided by critics as the “Cornhusker kickback.” Late Wednesday the White House said the president was pushing to strip out a number of deals that remain, possibly including a provision sought by Sen. Max Baucus, D-Mont., providing Medicare coverage for residents of Libby, Mont., who suffer from asbestos-related illnesses because of a now-closed mining operation.

Considering that Obama Administration officials were with Senate Majority Leader Harry Reid every step of the way when the odious, unethical deals were made to buy the votes of Democratic Senators Ben Nelson (D-NE), Senator Max Baucus (D-MT), Bernie Sanders (D-VT), Mary Landrieu (D-LA) and others for the prior Christmas Eve vote on Obamacare, AP is certainly taking a lot of artistic license to now claim, as they do above, that Obama “has moved to eliminate a couple of special deals in the Senate bill that turned off voters when they became public”. The AP’s praise of the Obama Administration for removing some of the backroom deals that the White House and Congressional Democrats created in the first place, and removing them only after such unethical deals became public knowledge, again demonstrates the lapdog status of the establishment media towards President Obama and highlights the nearly impossible task facing opponents of Obamacare in the days to come as the entire establishment media and DC establishment move in tandem to push Obamacare over the finish line.

The Show Me State temporarily became the No-Show State on Wednesday as some prominent Missouri Democrats decided they’d rather be somewhere else when President Obama came to push his massive health care overhaul plan.

Rep. Ike Skelton, one of 39 House Democrats who voted against the party’s health care overhaul bill in December, also skipped the presidential stop in his home state. Mr. Skelton, chairman of the House Armed Services Committee, was taking part in a House floor debate on the future of the war in Afghanistan.

In addition, Rep. Russ Carnahan, a Democrat from St. Louis and Mrs. Carnahan’s brother, skipped the event, even though it was in his home district.