SCROLL DOWN FOR LEFT-WING PROTEST PHOTOS/VIDEO

The Huffington Post, amid their thousands of column inches, hundreds of stories, and thousands of photos dedicated to discussing why the tea parties are stupid and unworthy of attention, recently and snarkily compiled their list of the Top Ten Most Offensive Tea Party Signs, the purpose of which, like that CNN hack what’s her name, is to mock the parties as stupid, fringe, lunatic or racist. (h/t Tommy Christopher)

A frequent complaint by those on the left who would make pretense that the tea parties are insignificant is the whiny “where were you when Bush was in office?” As if to say the parties aren’t genuine, because the participants didn’t hold them at earlier points in time. Jonah Goldberg handily wipes out that pathetic line of reasoning here, but I still have a remaining question for the HuffPo. Where was YOUR interest in offensive signage the last few years?

We already know the answer with regard to that CNN hack what’s her name. She was cheering it on. But hey, maybe the HuffPosers simply aren’t aware. Hmm? Maybe they missed out on the worst of the left? Well let’s not leave them in the dark shall we? In honor of the HuffPosers recently discovered sense of propriety, we herein generously offer, in a convenient and easy to reference guide, a sampling of the worst of the left protests of the last few years, which they may now happily denounce. You’re welcome, Huffers. (I call them Huffers, now. We’re tight like that.)

I’ll start with a charming, not safe for work video, and then we’ll go below the fold. I filmed this concerned citizen at the Democratic Convention in Denver this past fall. He was at the massive “Recreate 68/World Can’t Wait” protest, and his particular affiliation is a group called “USA Off The Planet”. Get those angry keyboards ready to denounce, Huffers:

The rest of that video featured me and the fat guy cursing at each other, so I clipped it for relevance. Note how the other protesters come to this speaker’s aid when he’s confronted. He wasn’t a fringe interloper, that sentiment is mainstream at leftwing protests. Do let’s go on … “Drive Out?” Wonder how Huffers would react to calls to “drive” Obama out of office. Nice touch on the shirt, too:

You know how everyone is “worried” about conservative talk of revolution? Napolitano comes to mind. Where were they the last few years when the call was EXPLICIT?:

See also here, if you can endure the protester’s obvious delusions of “Rage Against The Machine” grandeur: 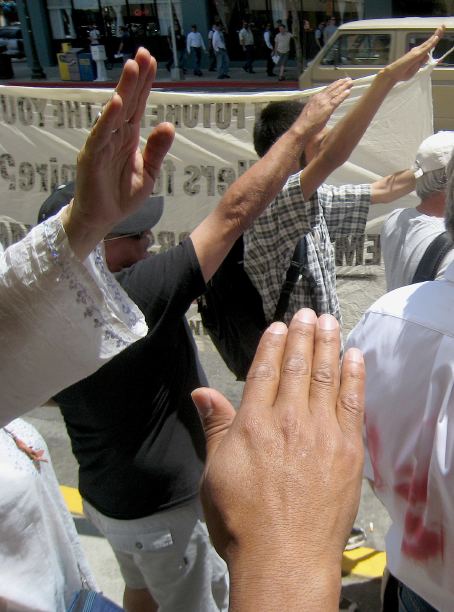 From Zombietime. Be sure to recall the Huffers’ distaste at seeing children at the tea parties: 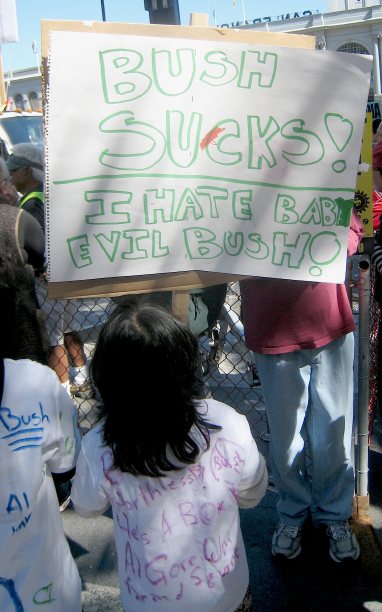 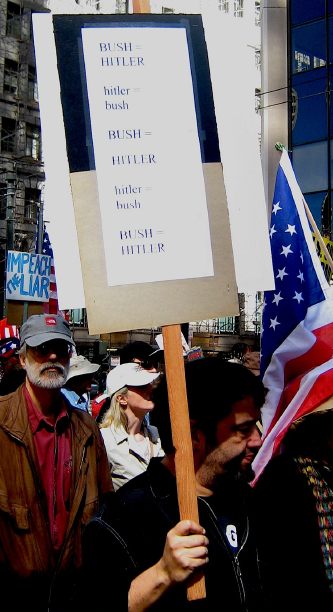 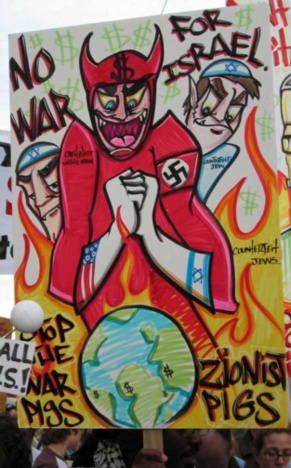 From ProtestWarrior.com (via freerepublic.com) . Totally racist AND calls for revolution. Anti-war protesters are all about class:

I shot the following snap in St. Paul. If you can’t tell, the sign on the left says “RNC 08 = Tianamen Square. I’m sure you can read the center sign. Are we offended yet Huffers?

I shot this video at the RNC. The protesters held a concert. To say this isn’t safe for work would be an understatement, but bleeping wouldn’t convey the hate. It wasn’t fringe, this was a huge crowd and part of the main protests. As offensive goes, it’s hard to top:
.

As everyone at Redstate knows, I could go on and on and on. So please, can we dispense with the mock outrage on the left regarding the tea parties? Besides, we all know how the left really feels about free speech when they don’t agree with it:
.

The left is manufacturing two responses to the tea parties. One is dismissive and the other is horrified, a la Janeane Garofalo and HuffPo. Both are preposterous in light of their silence about, or participation in, the far more horrifying, yet totally commonplace practice at left-wing protests the last few years. So spare me, Huffington Post. Your pose is showing.

The Coming Green Electricity Nightmare
Townhall
Biden to Coast Guard hero: 'Thanks - now get out'
Twitchy
Starbucks and Seattle Times Send Stupid 'Cease and Desist' Letters to Republican Senate Candidate
Redstate
Biden Washes His Hands of Gas Prices Now That They're Going Back Up
PJ Media