"I did not have a hand in that meltdown!"-Bill Clinton 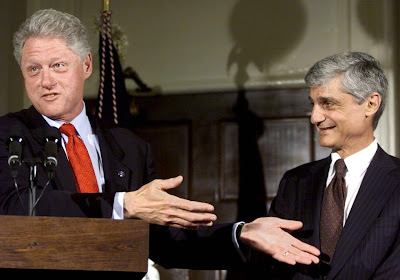 From Clinton Says Don’t Blame Him for the Economic Crisis

On Monday morning’s Today Show, Ann Curry’s interview with the former president – recorded over the weekend outside a Clinton Global Initiative event in Texas – addressed Clinton’s inclusion on TIME’s list of the "25 People to Blame" for the global economic collapse. “Oh no,” he responded, “My question to them is: Do any of them seriously believe if I had been president, and my economic team had been in place the last eight years, that this would be happening today? I think they know the answer to that: No.”

Bill, your lips were moving. Indeed, where your economic team was in place, how’d the last eight years work out?

The Financial Times gives us a clue.

Now, of course, a big loss has been disclosed at Citi and various people are asking what Mr Rubin had to do with it. That was among the subjects covered in a long article in The New York Times on Saturday. It found that Mr Rubin and Chuck Prince, Citi’s former chairman and chief executive, played “pivotal roles” in the bank’s disastrous push into underwriting and trading collateralised debt obligations.

The man in charge of this effort was Tommy Maheras, the former head of capital markets at Citi, who lost his job a year ago, shortly before Mr Prince resigned. Mr Rubin was then influential in selecting Vikram Pandit to succeed Mr Prince.

In fact, there was already evidence that Mr Rubin trusted Mr Maheras to match the skilled risk-taking in which Goldman specialised. Take a Bloomberg article written in September 2006 about Mr Maheras by Justin Baer, who now works for the FT:

Lifting revenue, at least in capital markets, sometimes means taking more chances. That’s where Maheras comes in. An ex-Salomon Brothers trader known to friends and colleagues as Tommy, Maheras is no stranger to risk. “You have to stick your neck out in trading,” he says. “And in management.”

Maheras has an instinct for both, says ex-US Treasury Secretary Robert Rubin, now chairman of Citigroup’s executive committee. “When Jon Corzine was running all of fixed income at Goldman, he would walk the trading room and just know this stuff,” says Rubin, who preceded Corzine, now governor of New Jersey, as Goldman Sachs’ co-chairman. “He had it in his bones. He had it in his fingers. And so does Tommy.”