What If the Shroud of Turin Is Christ's Authentic Burial Cloth? 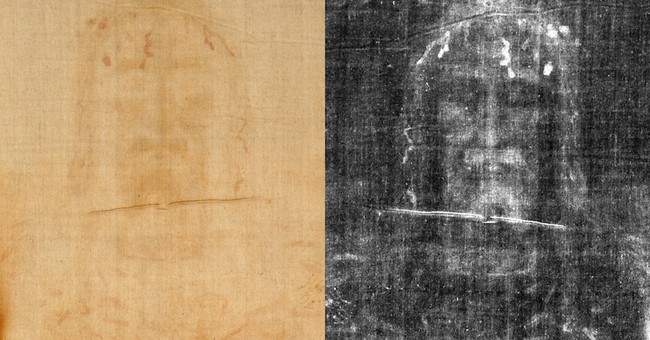 Yesterday on “Holy Saturday,” there was an extraordinary online exposition of the Shroud of Turin —purported to be the authentic burial cloth of Jesus Christ — viewed live across the globe on numerous media platforms.

Catholic News Service reported earlier this week that amid the coronavirus pandemic, Archbishop Nosiglia [of Turin, Italy] had received thousands of requests to pray before the Shroud during Holy Week to ask God for “the grace to defeat evil as he did, trusting in the goodness and mercy of God.”

The report concluded with the Archbishop’s heart wrenching, yet hopeful statement that seeing the Shroud “will go to the heart and the sadness of many people who will follow us. It will be like staying with the Lord on the day we await his Resurrection.”

Proclaiming His Resurrection today are 2.4 billion people around the world who adhere to the Catholic and Protestant branches of the faith based on the divinity of Jesus Christ. (The Orthodox Church celebrates on April 19.)

That evokes one of Easter’s most frequently asked questions:

Is the Shroud of Turin shown yesterday — evidence of Jesus’ suffering, death, and Resurrection — the same linen cloth belonging to Joseph of Arimathea that he and Nicodemus used to wrap the body of Jesus on Good Friday?

That “evidence” is seen on a rectangular shaped cloth measuring 14.6 feet long and 3.5 feet wide. The Shroud displays a mysterious faint, continuous, front-to-back yellowed image of a bearded, crucified man with AB type bloodstains matching the wounds suffered by Jesus of Nazareth as recorded in all four Gospel narratives.

“Mysterious” because the Shroud is the world’s most revered and studied artifact with numerous unexplained properties and questions that still baffle 21st -century scientists.

How was the image formed?

No one knows. One popular scientific theory is that radiation rose from within the body, resulting in a burst of light that scorched the cloth with a detailed, anatomically correct male image. Yet, scientists know how the man’s image was NOT formed.

In 1981, close to 40 distinguished scientists participating in the only comprehensive study ever authorized — the 1978 Shroud of Turin Research Project (STURP) — famously concluded: “No pigments, paints, dyes or stains have been found,” and “The Shroud is not the product of an artist.”

What explains the photographic abnormality?

In 1898, Italian photographer Secondo Pia applied the “new” technology of photography to the Shroud. In his darkroom, Pia discovered the Shroud’s first “modern” unexplained mystery — when seen with the naked eye, the cloth is a “negative” image — but develops as a “positive” photographic negative. The “positive” image shows in vivid detail the marks of torture endured by the man.

Why is the Shroud image encoded with 3D “distance” information?

Amazingly, the Shroud and the image is 2D but reads like a 3D “relief map.” This bewildering one-of-a-kind property was discovered in the 1970s. Quoting again from STURP’s final report summary: “Computer image enhancement and analysis by a device known as a VP-8 image analyzer show that the image has unique, three-dimensional information encoded in it.”

How is the Shroud image uniform in depth?

Remarkably, the man’s image is only two microfibers deep — the thickness of about 1 percent of a single thread — and uniform in intensity throughout the cloth with no deviation — a feat impossible to accomplish with human hands!

Furthermore, there are many more mysteries and controversies concerning substances found on the cloth such as pollen, dust, and traces of plants and flowers, some that trace back to Jerusalem in the spring during the time of Jesus.

What about the radiocarbon dating controversy?

The most famous, damaging, and widely known controversy concerns the 1988 radiocarbon (C-14) tests dating the Shroud to between 1260 and 1390, thus denigrating the cloth as a “medieval forgery.” Immediately, scientists questioned and criticized the test protocols.

Finally, in 2017, the radiocarbon test raw data was released after 29 years. Subsequently, a research study completed in 2019 concluded that the medieval dates — famously reported in 1988 with great fanfare and “95 percent confidence” — were very suspect and unreliable.

Given all that background, let’s explore the title question (slightly expanded):

What if the Shroud of Turin is Christ’s authentic burial cloth and proof of his suffering, death, and Resurrection?

As a founding member of Sign From God — a Shroud education ministry also involved with the planned February 2021 high-tech exhibition about the Shroud at the Museum of the Bible in Washington, D.C.  — here is what I believe:

The Shroud is authentic because that explains the cloth’s unexplainable mysteries and properties. However, if “proven” authentic, the Shroud erases all the world’s excuses not to believe that Jesus Christ is Lord.

To help celebrate Easter, I posed this same question to colleagues who are world-renown Shroud experts, authors, speakers, theologians, and educators:

Cheryl H. White, Ph.D., LSU Professor of History and curator of The Museum of the Holy Shroud, Shreveport, LA.:

“If the Shroud of Turin is authentic, it, of course, affirms what many people already believe. Yet, its authenticity still remains beyond the accessible realm of human knowing. The truly great mystery of the cloth is its profound parallel to the deeper mystery it represents.”

“If the Shroud was proven to be authentic, it would change everything. Why? The Resurrection changed everything.  It was a singularity comparable to the Big Bang. It was proof that Jesus is the Son of God.  He was crucified for a reason and overcame death for a reason.  What reason?  For God so loved the world…”

“If the Shroud pertains to Jesus of Nazareth, then blessed are we to behold in it some semblance of the face of God and to contemplate the body that bore the sins of the world, buried them in the ground, and then rose to new and eternal life!”

“The Shroud is now an object of faith to a billion people, but I think each person has to regard it from their own perspective. The answer to faith isn’t on the cloth, but in the eyes and hearts of those who look upon it.”  (See my recent interview with Barrie.)

“It is very possible that the Shroud is the actual burial garment of Jesus, with dozens of pointers in that direction, combined with the recent serious blow to the 1988 carbon dating tests. If so, this could indicate additional converging evidence for Jesus’ Resurrection, the most significant event in human history.”

Yes, today, we celebrate “the most significant event in human history.”

Hallelujah! “He is not here; he has risen.”

Myra Adams is a conservative writer and media producer.  MyraAdams.com  She is also Executive Director of www.SignFromGod.org a ministry dedicated to educating people about the Shroud of Turin. Contact: [email protected]

Biden Crashes America into a Recession
Townhall
Glenn Greenwald takes extremely rich Lefty Margaret Atwood APART after she mocks Americans for caring more about gas prices than abortion
Twitchy
Karine Jean-Pierre Is Collapsing and Even Her Allies Are Starting to Notice
Redstate
The Morning Briefing: Congressional Climate Cult Commies Upset That SCOTUS's EPA Ruling Would Make Them Do Their Jobs
PJ Media