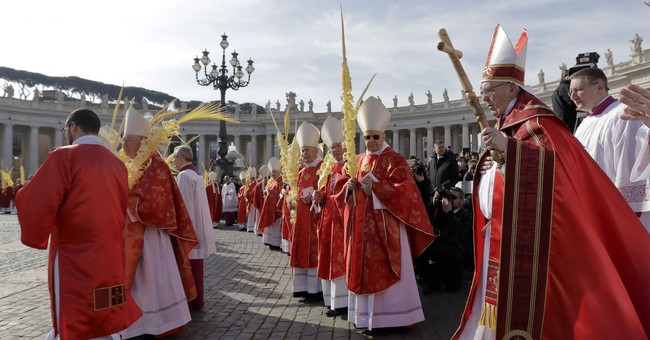 Having been born and raised Jewish (culturally, but hardly religious), all I knew about Jesus was that Jews did not believe in Him. So, promise not to laugh when I tell you that growing up, I thought Palm Sunday was about glorifying palm trees, and Good Friday was a Friday in spring that was “good.” (Especially because my suburban public elementary school was closed for the day — ah, Boston in the 1960’s.)

But later — thanks to Jesus, who was responsible for my conversion over four decades ago — my understanding the meaning of both days has vastly increased.

In general, a substantial decline in Biblical literacy is why I am beginning our Palm Sunday Bible study assuming zero-knowledge, not just for all the “young Myras” out there, but for people of any age who don’t know why this day is so named.

Palm Sunday is the Sunday before Easter. The day commemorates what is known as Jesus’ “Triumphal Entry” into the Holy City of Jerusalem — the heart of religious life, teaching, and worship in ancient Israel.

Here are the complete Palm Sunday passages recorded in all four New Testament Gospels in order of appearance:

Palm Sunday is also the start of “Holy Week.”

Highlights of the week were Jesus’s Last Supper (actually a traditional Seder meal celebrating the Jewish holiday of Passover) when He gave us His body and blood forever; followed by His arrest on Thursday evening; crucifixion and death on Friday; and Resurrection early on Easter Sunday morning.

When Jesus entered the Holy City on Palm Sunday, only He knew that the adoring, enthusiastic, Palm-branch-waving crowd would turn against Him five days later, yelling, “Crucify him, crucify him” on the “Friday in spring that was good.”

The four Gospels describe the joyous reaction of the crowd as Jesus rides on the back of a donkey (or colt) through the streets of Jerusalem.

The people, well versed in Hebrew Scripture (what we now call the Old Testament), recognize the significance of Jesus’s mode of transport because of the following passage written around the year 518 BC in the Book of Zechariah:

“Rejoice greatly, Daughter Zion! Shout, Daughter Jerusalem! See, your king comes to you, righteous and victorious, lowly and riding on a donkey, on a colt, the foal of a donkey” (Zechariah 9:9).

But only the Gospels of Matthew (21:4) and John (12:15) mention that Jesus was fulfilling the prophecy recorded in Zechariah.

However, it is essential to note that immediately preceding Jesus entering Jerusalem —  mirrored almost word for word in Matthew (21:1-3) Mark (11:1-3) and Luke (19:30-31) — are specific instructions issued by Jesus about where and how his disciples were to acquire the donkey because “the Lord needs it.”

Jesus “needed” the lowly donkey to convey the royal message that Zechariah prophesied over 500 years before Jesus was born: “See, your king comes to you …” (Believers in Jesus know that He comes to us, not just on Palm Sunday, but every day.)

Let’s now examine the four Gospel accounts of the “Triumphal Entry.” You will notice only slight differences in how the people express their jubilation for Jesus — who they believe is their Messiah, Savior, and King.

“The crowds that went ahead of him and those that followed shouted, ‘Hosanna to the Son of David!’ ‘Blessed is he who comes in the name of the Lord!’ ‘Hosanna in the highest heaven!'” (Matthew 21-9).

“Those who went ahead and those who followed shouted, ‘Hosanna!’ ‘Blessed is he who comes in the name of the Lord!’ ‘Blessed is the coming kingdom of our father David!’ ‘Hosanna in the highest heaven!'” (Mark 11: 9-10).

“When he came near the place where the road goes down the Mount of Olives, the whole crowd of disciples began joyfully to praise God in loud voices for all the miracles they had seen: ‘Blessed is the king who comes in the name of the Lord!’ ‘Peace in heaven and glory in the highest!'” (Luke 19:37-38).

“The next day, the great crowd that had come for the festival heard that Jesus was on his way to Jerusalem. They took palm branches and went out to meet him, shouting, ‘Hosanna!’ ‘Blessed is he who comes in the name of the Lord!’ ‘Blessed is the king of Israel!'” (John 12:13).

It is a confrontational conversation between Jesus and the Jewish religious leaders, foreshadowing the suffering that He would endure on Friday.

The Pharisees, with no tolerance for the crowd’s “blasphemous” chats, demanded that Jesus curb the enthusiasm on the street. Jesus responds to the Pharisees’ request saying: “I tell you, if they keep quiet, the stones will cry out” (Luke 19:40).

Jesus’s brilliant answer speaks volumes. The people of Jerusalem recognized who was riding that donkey, and had to exclaim: “Blessed is the king who comes in the name of the Lord.” And Jesus knew the tremendous energy, power, hope, and love that He was transmitting to His people could not be contained.

But that was Sunday. If readers want to learn more about the events of a week that forever changed the world, I recommend “A Time Line of Easter Holy Week, Passion Week” at Christianity.com.

Finally, during Holy Week, the conflict that has long been brewing between the Jewish authorities and Jesus comes to a head. Jesus contradicts the Temple leaders saying in essence:

If you want to know and meet God, you must go directly to me.

If you want forgiveness of sin, stop your animal sacrifices at the temple, and believe in me.

Then in my humble opinion, here is the best summary of who Jesus is in the entire New Testament:

“I am the way and the truth and the life. No one comes to the Father except through me” (John 14:6).

Today, at the start of Holy Week, during this health and economic crisis, I believe that message is more pertinent and meaningful than ever.

Myra Adams is a conservative writer and media producer.  MyraAdams.com  She is also Executive Director of www.SignFromGod.org a ministry dedicated to educating people about the Shroud of Turin. Contact: [email protected]